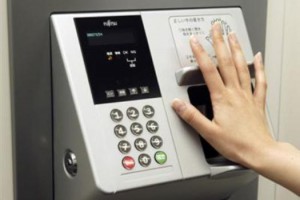 The technology needed to institute the coming ?mark of the Beast? (Revelation 13:16-18) economic system, as foretold in the Bible, is progressing rapidly. So is the media campaign that will help put it in place as we can see in the following article.

Last year thousands of earthquake victims in Japan fled their homes without their cash cards, leaving some in a predicament.

Luckily, one bank has the answer ? ATMs that use a palm-scanner to issue money.

Ogaki Kyoristu Bank said the new machines will be installed at 10 banks and a drive-through ATM this September.

In publicity material it proclaimed that ?You are your cash card?.

It said that the idea was a response to the thousands of tsunami survivors who last year couldn?t access their bank accounts for months because they?d lost all their cards and ID.

Palm-scanning ATMs are nothing new in Japan, but these will be the first that don?t require any card at all.

The announcement follows a trial started in December by Kraft of the iSample vending machine, which uses a biometric scanner to ‘read’ the age and gender of people standing in front of it, and will serve adults, but refuse children.

The iSample is desgned to offer free samples of Kraft’s new Temptations jelly – a dessert marketed at adults.

It’s clearly a promotional tool – but the biometric technology behind it is serious, and already under test by companies such as Gillette.

The scanner uses biometric data to ‘guess’ the age of people standing in front of it, dividing adults into four ‘age brackets’.

Other software has already been shown to be able to ‘guess’ ages to an accuracy of around five years.

You Are Your Cash Card: Japanese Bank To Roll Out ATMs That Are Accessed By A Palm-Scanner
http://endtimeinfo.com/2012/04/you-are-your-cash-card-japanese-bank-to-roll-out-atms-that-are-accessed-by-a-palm-scanner/
biometric IDmark of the Beast
Previous ArticleBig Green Oil Money: WWF founded and run by Royal Dutch-ShellNext ArticleMore wars and earthquakes – End Time Info Podcast