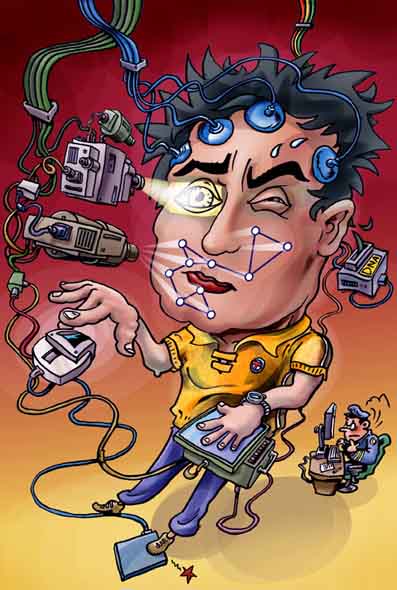 Proponents say human chipping can make identification more secure, guarantee proper healthcare, reduce crime, expedite financial exchanges, and simplify everyday life. These claims are probably true. However there is more to it than that?or will be. The coming mark of the Beast will have spiritual ramifications as well as practical ones. ?If anyone worships the Beast [Antichrist] and his image, and receives his mark on his forehead, or on his hand, he himself shall drink of the wine of the wrath of God? (Revelation 14:9-10). Receiving the mark of the Beast will not be merely an economic decision, but will also signify acceptance and worship of the Satan-possessed Antichrist and allegiance to his anti-God global regime. This is what the future of chipping holds, and what most of its advocates don?t realize or choose to ignore. – Joseph Candel 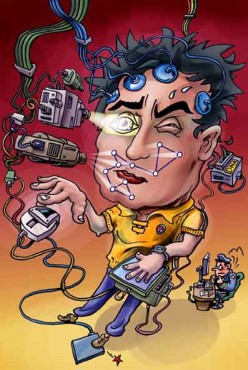 What would you do if someday the government made it mandatory for everyone to receive an implantable microchip for identification purposes?  Would you take it?  Such a scenario may not be as far off as you might think.  In the United States today, millions of dogs and cats have been microchipped, thousands of elderly Americans with Alzheimer’s disease have been microchipped, and the U.S. military is developing “medical devices” that contain microchips to monitor the health of soldiers.

The plan to implant U.S. soldiers with implantable microchips was detailed in a recent article by Kate Knibbs….

The U.S. military plans to implant soldiers with medical devices, making them harder to kill with diseases.

These technological “advances” are usually promoted in such a way that makes it difficult for the average citizen to get angry about them.  After all, who could be against keeping our soldiers alive and healthy?

But as they say, the path to hell was paved with good intentions.  It turns out that researches at Stanford University are also busy developing similar technology for the general public….

Nanotechnology continues to find a place in the medical field as well. Stanford University researchers are developing tiny robotic monitors that can diagnose illnesses, monitor vital stats and even deliver medicine into the bloodstream, similar to the devices that the military plans to create. The two projects have yet to link up, but their similar goals suggest the military could benefit from coordinating efforts with leading university scientists.

Would you let them put a microchip inside of you if it would supposedly keep you healthier?

As this kind of technology becomes more widespread, people will be told that they don’t want to “miss out” on the great benefits that it provides.

The spread of implantable microchips is going to mostly be voluntary for right now.  Large numbers of Americans have already taken them, and that number is going to greatly increase in the years ahead.

A recent WND article contained some quotes from privacy expert Katherine Albrecht about how the widespread adoption of implantable microchips will primarily be through voluntary methods….

?It?s never going to happen that the government at gunpoint says, ?You?re going to have a tracking chip,?? said Katherine Albrecht, who with Liz McIntyre authored ?Spychips,? a book that warns of the threat to privacy posed by Radio Frequency Identification.

?It?s always in incremental steps. If you can put a microchip in someone that doesn?t track them ? everybody looks and says, ?Come on,?? she said. ?It?ll be interesting seeing where we go.?

As this technology spreads, it will become much easier for various institutions to start making it a requirement.

For example, what happens someday if your employer requires you to get an implantable microchip for security reasons?

What happens someday if your bank requires you to get an implantable microchip in order to use your bank account?

Don’t think that it can’t happen.

All over the globe, there is an obsession with making “identity” more secure.

Just check out what is going on in India according to the Electronic Frontier Foundation….

In India, a massive effort is underway to collect biometric identity information for each of the country?s 1.2 billion people. The incredible plan, dubbed the ?mother of all e-governance projects? by the Economic Times,has stirred controversy in India and beyond, raising serious concerns about the privacy and security of individuals? personal data.

The plan is moving ahead at a clip under the auspices of the National Population Register (NPR) and the Unique ID (UID) programs, separately governed initiatives that have an agreement to integrate the data they collect to build the world?s largest biometric database. Upon enrollment, individuals are issued 12-digit unique ID numbers on chip-based identity cards. For residents who lack the necessary paperwork to obtain certain kinds of employment or government services, there?s strong incentive to get a unique ID. While the UID program is voluntary, enrollment in the NPR program is mandatory for all citizens.

How long do you think it will be before even more countries develop their own “Unique ID” programs?

We will be told that such programs are necessary to prevent identity fraud, to track criminals and terrorists, to crack down on tax evaders and to strengthen “national security”.

The thing with a card is that it can always be lost, stolen or forged.

It seems inevitable that governments around the world will want something even more “secure” than a card at some point.

So will you allow the government to inject your “identity card” into your hand when the time comes?

But not all of these advanced microchips will be implantable.

The sensor, which contains no battery, antenna or radio, creates a unique digital signature that is picked up and recorded by a patch attached to the patient’s shoulder.

The patch, which also monitors bodily functions such as heart rate and temperature, sends this encrypted information to blue-tooth enabled smartphones or computers owned by the patient and their doctors and carers.

In this way, both patients and their doctors can work out exactly which pills have been taken. Medics can also interpret whether the patient is sleeping well, or taking enough exercise using the information transmitted from the patch.

Would you take an “edible microchip” if it would help your doctor take better care of you?

Other people will want to take implantable microchips because it will enable them to become more “connected” to our technology grid.

For example, if it was possible would you connect your brain directly to the Internet?

It may not be as far off as you might think.  An article on the website of the Science Channel recently asked the following question….

What if it were possible to connect your brain to the Internet, either wirelessly or through a cable, download digital information at high speed, and then translate it automatically into a chemical form that could be stored by your brain cells as memory?

That same article explained that the benefits of directly connecting our brains to the Internet could be absolutely amazing….

If you could pump data directly into your gray matter at, say, 50 mbps ? the top speed offered by one major U.S. internet service provider ? you?d be able to read a 500-page book in just under two-tenths of a second.

But wouldn’t connecting your brain to the Internet also be incredibly dangerous?

Couldn’t someone find a way to “control” your brain remotely?

We will be sold on the “benefits” of implantable microchips, but the public will rarely be told about the potential dangers.

Right now, there are millions of dogs and cats all over the country that have been injected with microchips.  In fact, some American cities are actually making it mandatory to get your pets microchipped.  We are told that this makes it much easier to return lost pets to their owners.

All over America, implantable microchips are being injected into thousands of elderly Americans living with Alzheimer’s disease.  We are told that this makes it much easier to find them if they wander off and get lost.

But what are the dangers?

What would happen if a totalitarian government started requiring that all citizens have their “identities” put on a microchip and implanted into them?

It would certainly make it easier for a “Big Brother” government to watch, monitor and track everyone.

And it would become nearly impossible to live a normal life without getting an implant.

What would you do if you could not get a bank account without a microchip?

What would you do if you could not go shopping without a microchip?

What would you do if you could not get a job without a microchip?

What would you do if you could not conduct a single financial transaction without a microchip?

How would you live?

Certainly most people would be very tempted to take the microchip so that they could take care of their families and lead fairly normal lives.

Those that rebelled and didn’t take the microchip would be ostracized and would be considered enemies of the state.  They would be hunted down and hauled off to prison.

Don’t think that such a scenario is impossible.

Just think about how our society has changed in recent years.  It has become more like a giant prison every single day.

At some point in the future, implantable microchip technology will be used for nefarious purposes.

What will you do when that day arrives?

After The Government Microchips Our Soldiers, How Long Will It Be Before They Want To Put A Microchip In YOU
http://endtimeinfo.com/2012/05/after-the-government-microchips-our-soldiers-how-long-will-it-be-before-they-want-to-put-a-microchip-in-you/
chip implantmicrochip implantmind controlpolice statesurveillance
Previous ArticlePreparing for World Web War INext ArticleFarage: We Face The Prospect Of Mass Civil Unrest In Europe