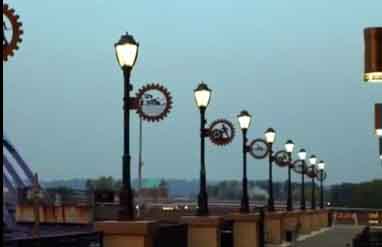 Shortly before his death, in 1949, George Orwell wrote his final work, the classic 1984. It painted a chilling picture of our future in which the world had fallen under the rule of three great totalitarian governments. The government that controlled what had been Britain, and the United States was called Oceania and was ruled by Big Brother. News, books, plays, movies?everything was censored. History was rewritten to suit current propaganda needs. ?Thought police? monitored behavior patterns to detect possibly deviant attitudes. Invasive listening devices tuned in to the most intimate conversations. As incredible as all of these technological advances are and as thought provoking as they may be to those who have read about Big Brother, we really shouldn?t be surprised. The Bible predicted the arrival of such a system more than 2,000 years ago.

?And he [the Antichrist’s chief aide, referred to in the Bible as the “false prophet” who “deceives the world”] causes all, both small and great, rich and poor, free and slave, to receive a mark on [in] their right hand or on [in] their foreheads, and that no one may buy or sell except one who has the mark or the name of the beast [the Antichrist], or the number of his name. ? His number is 666? (Revelation 13:16-18). Under this 666 system, no one on earth will be allowed to buy or sell anything unless he or she receives a mark in the forehead or right hand. Technology is rapidly reaching the point where the coming Mark of the Beast 666 electronic economic system can take over. – Joseph Candel

Talking surveillance cameras that bark orders at passers-by and can also record conversations are heading for U.S. streets, with manufacturer Illuminating Concepts announcing the progress of its ?Intellistreets? system.

The street lights also have loudspeakers that can give audible warnings to individuals, mimicking the talking surveillance cameras in the UK that shout out orders through microphones telling people to pick up litter or leave the area.

A recent press release put out by Amerlux announces the company?s partnership with Illuminating Concepts to further advance the rollout of ?Intellistreets?.

The announcement confirms that the street lights will have a number of ?homeland security features? including a loudspeaker system that will be used to ?engage captive audiences?.

?The built-in speaker can broadcast emergency information,? states the press release, adding, ?SmartSite luminaires can be equipped with a variety of cameras and sensors to ensure real-time 24/7-security coverage.

The sensors detect a variety of threats that enable rapid response from emergency personnel or help prevent crime and gain control of the streets.?

The press release adds that the SmartSite system developed to operate the ?Intellistreets? surveillance hubs is intended not only for street lighting but also for ?retail malls, sports venues, on college campuses, and in new construction,? and ?might well become commonplace? in the near future.

Not only can the street lights, now being rolled out in Detroit, Chicago and Pittsburgh with Department of Energy backing, act as surveillance cameras, Minority Report-style advertising hubs, and Homeland Security alert systems, they are ?also capable of recording conversations,? according to a report by ABC 7.

The ABC video clip, featured at the end of this article, includes creepy footage of the street lights being used to transmit Orwellian security alerts, including ?pay attention please?.please stand by for a public safety announcement,? and ?this is a security alert?.

Illuminating Concepts responded to the controversy over ?Intellistreets? last year by ludicrously claiming the system did not represent a ?big brother? intrusion, as if talking surveillance cameras that also record private conversations are a perfectly normal concept.

The company also denied that it had received funding from the Department of Homeland Security yet subsequent reports confirmed that owner Ron Harwood is now ?working with Homeland Security? to implement the high tech network, which is connected via a ubiquitous wi-fi system.

In reality, the system represents Big Brother on steroids ? George Orwell?s worst nightmare come to life with interconnected wireless ?telescreens? blanketing America, all in the name of safety and security.