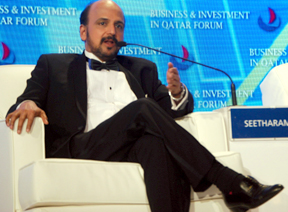 The signs of the end are all around us, signs of the coming One World Government or Global Governance as the globalist like to call it. The world is being prepared for it & the eventual rise of the Antichrist and a new worldwide financial infrastructure. Do you not see the hand of the globalists working behind the scenes to bring about this one-world power? – Joseph Candel

Doha Bank (Q.S.C) : The Crisis is an Opportunity to attain the UN?s Millennium Development Goals ? The United Nations General Assembly?s ?High-Level Thematic Debate on the State of the World Economy? was held at ECOSOC Chamber, North Lawn Building, United Nations, New York between 17- 18th May 2012. Mr. R. Seetharaman, Doha Bank Group CEO participated in the Roundtable 4 Session ?Increasing stability, predictability and transparency in the financial sector on 18th May 2012. ? 4-traders.com (5/20/12)

You believe in the ?new world order?? You?re a paranoid nutball, right? Well, here?s a revealing report showing the global regulatory solutions to the four-year old financial crisis and the realization of a UN-based ?new world order? are intimately linked.

This is not some crazy ?conspiracy theory.? This is the analysis of Mr. R. Seetharaman, CEO of Qatar?s largest, private commercial bank incorporated in 1979.

It?s hot off the presses as of May 20th, published by 4-traders.com and posted at the Doha Bank media center. One can pooh-pooh Mr. Seetharaman?s position based on the idea that Qatar is one of those funny, little Middle Eastern countries. But as we have pointed out previously, the powers-that-be are engaged in a full-on Westernization process of Islam using the smallest Middle Eastern countries as a kind of monetary wedge.

With the backing of media-giant Bloomberg, Qatar has been picked to provide the QIBOR (a replacement for the staggering LIBOR) providing a daily reference point for banks borrowing unsecured funds from other banks. Total amount of funds affected? Up to US$90 trillion.

Qatar is a ?player.? So, likely, is Seetharaman. Here?s a little more:

The Volcker?s Rule was enacted under this regulation to restrict proprietary trading. The SEC also proposed tougher disclosure rules for Hedge fund and private equity firms. FSB, IMF and BIS are working on macro-prudential policy frameworks, including tools to mitigate the impact of excessive capital flows. Policy framework for systemically important financial institutions, regulation and oversight of shadow banking, risk practices on structured products were some of the areas which required review in the light of current crisis. Basel 3 is also planned to be implemented.?

Here?s a brief bio of Seetharaman from his own webpage:

?Mr. R. Seetharaman is the Chief Executive Officer of Doha Bank Group. Mr. Seetharaman has nearly three decades of experience in banking, information technology and consultancy. He has a distinguished academic background ? he is a Chartered Accountant and holds certificates in IT Systems and Corporate Management, whilst being a gold medalist in his graduation Bachelor of Commerce from the University of Madras in the year 1979. His specialization includes Managerial Economics.?

What are the UN?s Millennium Development goals? According to Wikipedia (as footnoted via a UN background page), there are eight of them agreed to by ?all 193 United Nations member states and at least 23 international organizations? ? to be realized by the year 2015. Goals are:

Sounds good? Not so fast. The UN is surely a weapon of the super-elite that wants to run the world. ?Environmental sustainability? (the 7th goal) is a Trojan Horse for full-fledged eco-fascism and ?green control? of every part of one?s life and livelihood.

Mr. Seetharaman is seemingly enthusiastic about all this, however. The article expands on his viewpoints, which must certainly be shared by others at his level. Here?s some more:

Mr. Seetharaman correlated the UN millennium development goals with regulatory reforms and economic development. He said ?The current realignment of global architecture will support the achievement of one of the 8 UN Millennium development goals ?to develop a global partnership for development? which aims to develop further an open, rule-based, predictable, non-discriminatory trading and financial system. Economies need to integrate the principles of sustainable development into their policies and programs and reverse loss of environmental resources.

This will also enable such economies to achieve the UN Millennium development goal of ?Ensure environmental sustainability?. Qatar?s National Vision 2030 has also considered environment development as one of the pillars of its vision. Financial sector can also participate in this sustainable development by taking initiatives to ?Manage Climate Change and Mitigate Global Warming.?

Thanks, Mr. Seetharaman for providing a glimpse as to how global regulatory reform is being tailored to support eco-fascism. The question is how.

The answer is ? (of course) by force.

What Seetharaman is revealing is that the various regulatory facilities now being put into place are going to give top regulators the power to force the global network of too-big-to-fail banks to abide by UN policy.

The elites are apparently formalizing power via a worldwide regulatory menu that includes control of money itself (capital flows) control over proprietary trading (what one can invest in) and, generally, regulation that will compel participants in global markets to share their most personal and private investment data.

No secrets will be kept from a larger Eye.

People are not apt to follow global regulatory issues closely, but this article reveals to us how elaborately intertwined financial and political power have become at the very top of the elite conversation. Step by step, the ?new world order? nears reality.