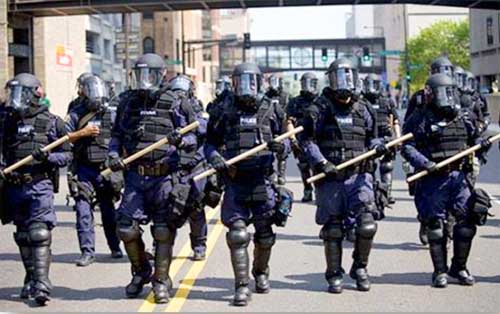 Via Before It’s News 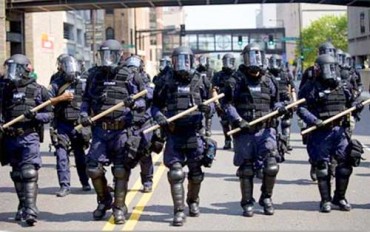 ?Folks, we?re getting ready for one massive economic collapse,? Hagmann told TruNews host Rick Wiles.  ?We have problems . . . The federal government is preparing for civil uprising,? he added, ?so every time you hear about troop movements, every time you hear about movements of military equipment, the militarization of the police, the buying of the ammunition, all of this is . . . they (DHS) are preparing for a massive uprising.?

Hagmann goes on to say that his sources tell him the concerns of the DHS stem from a collapse of the U.S. dollar and the hyperinflation a collapse in the value of the world?s primary reserve currency implies to a nation of 311 million Americans, who, for the significant portion of the population, is armed.

Uprisings in Greece is, indeed, a problem, but an uprising of armed Americans becomes a matter of serious national security, a point addressed in a recent report by the Pentagon and highlighted as a vulnerability and threat to the U.S. during war-game exercises at the Department of Defense last year, according to one of the DoD?s war-game participants, Jim Rickards, author of Currency Wars: The Making of the Next Global Crisis.

Through his sources, Hagmann confirmed Rickards? ongoing thesis of a fear of a U.S. dollar collapse at the hands of the Chinese (U.S. treasury bond holders of approximately $1 trillion) and, possibly, the Russians (threatening to launch a gold-backed ruble as an attractive alternative to the U.S. dollar) in retaliation for aggressive U.S. foreign policy initiatives against China?s and Russia?s strategic allies Iran and Syria.

?The one source that we have I?ve known since 1979,? Hagmann continued.  ?He started out as a patrol officer and currently he is now working for a federal agency under the umbrella of the Department of Homeland Security; he?s in a position to know what policies are being initiated, what policies are being planned at this point, and he?s telling us right now?look, what you?re seeing is just the tip of the iceberg.  We are preparing, we, meaning the government, we are preparing for a massive civil war in this country.?

?There?s no hyperbole here,? he added, echoing Trends Research Institute?s Founder Gerald Celente?s forecast of last year.  Celente expects a collapse of the U.S. dollar and riots in America some time this year.

Since Celente?s ?Civil War? prediction of last year, executive orders NDAA and National Defense Resources Preparedness were signed into law by President Obama, which are both politically damaging actions taken by a sitting president.

And most recently, requests made by the DHS for the procurement of 450 million rounds of hollow-point ammunition only fuels speculation of an upcoming tragic event expected on American soil.

These major events, as shocking to the American people as they are, have taken place during an election year.

Escalating preparatory activities by the executive branch and DHS throughout the last decade?from the Patriot Act, to countless executive orders drafted to suspend (or strip) American civil liberties  ?are just the beginning? of the nightmare to come, Hagmann said.

He added, ?It?s going to get so much worse toward the election, and I?m not even sure we?re going to have an election in this country.  It?s going to be that bad, and this, as well, is coming from my sources.  But one source in particular said, ?look, you don?t understand how bad it is.?  This stuff is real; these people, the Department of Homeland Security (DHS), they are ready to fight the American people.?

TruNews? Wiles asked Hagmann: who does the DHS expect to fight, in particular?  Another North versus South, the Yankees against the Confederates?  Hagmann stated the situation is far worse than a struggle between any two factions within the U.S.; it?s an anticipated nationwide emergency event centered on the nation?s currency.

?What they [DHS] are expecting, and again, this is according to my sources, what they?re expecting is the un-sustainability of the American dollar,? Hagmann said.  ?And we know for a fact that we can no longer service our debt.  There?s going to be a period of hyperinflation . . . the dollar will be worthless . . . The economic collapse will be so severe, people won?t be ready for this.?