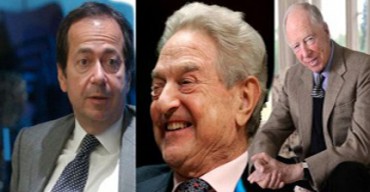 Are you willing to bet against three of the wealthiest men in the entire world?  Jacob Rothschild recently bet approximately 200 million dollars that the euro will go down.  Billionaire hedge fund manager John Paulson made somewhere around 20 billion dollars betting against the U.S. housing market during the last financial crisis, and now he has made huge bets that the euro will go down and that the price of gold will go up.  And as I wrote about in my last article, George Soros put approximately 130 million more dollars into gold last quarter.  So will the euro plummet like a rock?  Will the price of gold absolutely soar?  Well, if a massive financial disaster does occur both of those two things are likely to happen.  The European economy is becoming more unstable with each passing day, and investors all over the globe are looking for safe places to put their money.  The mainstream media keeps telling us that everything is going to be okay, but the global elite are sending us a much, much different message by their actions.  Certainly Rothschild, Paulson and Soros know about things happening in the financial world that the rest of us don’t.  The fact that they are all behaving in a consistent manner right now should be alarming for all of us.

Let’s start with Jacob Rothschild.  Apparently he believes that the euro is headed for quite a tumble.  The following is from a recent CNBC article….

You know the euro is in deep water when a doyen of the banking industry, Lord Jacob Rothschild takes a ?130 million ($200 million) bet against it.

Does it really have that much more that it can fall?

If the eurozone ends up breaking apart it sure does.

If there is a Greek default, or if Germany leaves the euro, or if a new currency comes along to replace the euro those currently betting against it will end up looking like geniuses.

Another big name in the financial world that is betting against the euro right now is John Paulson.  The following is from a recent Der Spiegel article….

One of these warriors is John Paulson. The hedge fund manager once made billions by betting on a collapse of the American real estate market. Not surprisingly, the financial world sat up and took notice when Paulson, who is now widely despised in America as a crisis profiteer, announced in the spring that he would bet on a collapse of the euro.

And as I noted in my last article, Paulson has also been putting billions of dollars into gold.

So just what are Rothschild and Paulson anticipating?

Could we be on the verge of a massive financial collapse in Europe?

According to the Der Spiegel article mentioned above, a lot of investors seem to be preparing for such a possibility right now….

Banks, companies and investors are preparing themselves for a collapse of the euro. Cross-border bank lending is falling, asset managers are shunning Europe and money is flowing into German real estate and bonds. The euro remains stable against the dollar because America has debt problems too. But unlike the euro, the dollar’s structure isn’t in doubt.

The financial world is starting to wake up to the fact that the globe is absolutely drowning in debt and it is not really good to be holding fiat currencies when a debt crisis erupts.

When men like John Paulson and George Soros start pouring huge amounts of money into gold, it is time to start becoming alarmed about the state of the global financial system.

The amount of money that these men are investing in gold is staggering….

There was also news last week in an SEC filing that both George Soros and John Paulson had increased their investment in SPDR Gold Trust, the world?s largest publicly traded physical gold exchange traded fund (ETF).

At the current price of about $156 a share, these are new investments of about $88m of Mr Soros? cash and more than $700m from Mr Paulson?s funds. These are significant positions.

According to a recent Marketwatch article, there are persistent rumors that China has plans to buy thousands of metric tons of gold….

Within the gold market, there is unconfirmed speculation that China plans to buy up to at least 5,000 to 6,000 metric tons of gold and that it will start to buy during this year, according to Kevin Kerr, president of Kerr Trading International.

If China buys this much gold, that would exceed annual, global production of gold, he said. ?We do not have enough gold for China to buy that much, and it will take China time to purchase this amount of gold.?

So what comes next?

Nobody is quite sure.

Another major financial crisis could erupt in Europe at any moment.

A major war in the Middle East could start literally at any time.

Renowned investor Jim Rogers believes that things are really going to get “bad after the next election“.

Others believe that the action could start even sooner than that.

The truth is that even though we have not seen a “Lehman Brothers moment” yet, things in Europe just continue to get progressively worse.  The following is from a recent article by Mark E. Grant….

Whether you turn your attention to Greece, Spain, Italy, Portugal or even Ireland; it is getting worse. Nowhere on the Continent are things improving and even in France and Germany the financial strains are beginning to show. It is not a question of Euro-bear or Euro-bull; it is just the numbers as they come rolling out month after month.

There is a growing realization in Europe that the euro simply does not work.  Italy is absolutely drowning in debt, the Spanish economy has basically descended into a depression, and Greece has been experiencing depression-like conditions for years at this point.

The euro is doomed.  The only question is who is going to blink first.

Nobody wants to be the first to leave the euro.  There are rumblings that it could actually be Finland that leaves the euro first, and that would please Germany just fine because they don’t want to look like the bad guys in all of this.

But that doesn’t mean that Germany won’t eventually pull the trigger if nobody else does.  The German public is sick and tired of bailing out the weak sisters of southern Europe, and at this point it looks like it would take perpetual bailouts just to keep the euro together.

And recently there have been lots of little signs that Germany is starting to move slowly toward the exit doors.

In fact, I found it quite interesting that a giant euro sculpture was recently removed from the Frankfurt International Airport….

A massive ? sculpture (identical to the one in front of the European Central Bank) was dismantled and removed from the Frankfurt International Airport in Germany Thursday.

The official explanation is ?the plastic parts are getting weak after 11 years and the terminal needed the space?.

Does ? sculpture?s removal from the Frankfurt Airport indicate Germany is preparing for a surprise return to the Deutsche Mark?

Sure that might just be a coincidence, but it also could be a harbinger of things to come.

Sadly, most average people living in North America and Europe have absolutely no idea what is coming.  Most of them just want to be able to get up in the morning and go to work and pay the bills and take care of their families.

Unfortunately, millions upon millions of those hard working individuals are in for a very rude awakening.

A lot of people are about to have their current lifestyles totally turned upside down.

But it doesn’t have to be all bad.

In fact, I found it very interesting to read about how some young people are responding to the depression in Greece….

In the spring of 2010, just as the Greek government was embarking on some of its harshest austerity measures, 29-year-old Apostolos Sianos packed in his well-paid job as a website designer, gave up his Athens apartment and walked away from modern civilisation.

In the foothills of Mount Telaithrion on the Greek island of Evia, Mr Sianos and three other like-minded Athenians set up an eco-community.

The idea was to live in an entirely sustainable way, free from the ties of money and cut off from the national electricity grid.

The group sleeps communally in yurts they have built themselves, they grow their own food and exchange the surplus in the nearest village for any necessities they cannot produce.

I think there is a lesson to be learned there.

When the system fails, it is going to be important to be able to live independently of the system.

Governments and big banks all over the world have been rapidly preparing for the coming financial collapse.

Perhaps the rest of us should be too.

If you can believe it, 77 percent of all Americans live paycheck to paycheck at least some of the time.

If another major economic crisis comes along, many of those people are going to be totally wiped out.

And there are already signs that the U.S. economy is basically on life support at this point.

Just look at the velocity of money.

In an economy that is growing and healthy, money tends to circulate very, very quickly.

But when an economy is sick, money tends to circulate very slowly.

And that is exactly what is happening right now. This is exactly what happened back in the 1930s.  The velocity of money absolutely plummeted.  When people are scared, credit is tight and times are hard, money does not exchange hands as rapidly.

But this is just the beginning.

What we are experiencing right now is rip-roaring prosperity compared to what is coming.

Jacob Rothschild, John Paulson and George Soros are preparing themselves for the tremendous chaos that is coming.

Are you getting prepared?

Jacob Rothschild, John Paulson And George Soros Are All Betting That Financial Disaster Is Coming
http://endtimeinfo.com/2012/08/jacob-rothschild-john-paulson-and-george-soros-are-all-betting-that-financial-disaster-is-coming/
economic collapseelitefinancial crashGeorge SorosRothschild
Previous Article21 Signs That This Could Be A Long, Hot Summer For The Global Financial SystemNext ArticleIran Responds to Massive U.S. Armada Gathering in the Persian Gulf