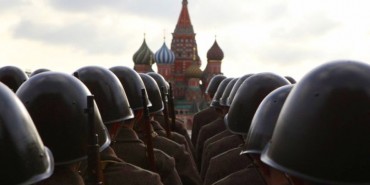 Coup leaders in Kyiv have rejected the Crimea referendum, refuse to pull troops off the peninsula following a March 17 vote to secede, and are preparing for war. ?Crimea was, is, and will be our territory,? Defense Minister Ihor Tenyukh declared in a statement delivered at the Ukrainian Crisis Media Center. ?Ukrainian forces will stay [in Crimea] until all their tasks have been completed.?U.S. State Department favorite Vitali Klitschko, who was passed over for central banker Arseniy Yatsenyuk to lead the coup government, said Ukrainian troops will stay in Crimea.

Klitscho cited a March 16 peace treaty agreement allowing Ukrainian soldiers to move freely in Crimea. According to Tenyukh, the Russians thus far have respected the agreement. Ukraine has used it to resupply troops on the peninsula.The Russians, however, expect Ukraine to honor the deadline of the treaty, set for March 21, and leave Crimea.Ukrainian President Oleksandr Turchynov said the junta will do everything possible to prevent war, but said ?the threat of war is real? We are strengthening our defense capacity. Ukraine is ready to defend its territory.?

The Verkhovna Rada, the Ukrainian parliament, has set aside 6.7 billion hryvnia, more than $600 million, to strengthen the country?s military forces and mobilize the armed forces for the possibility of war. The mobilization, Tenyukh told the KyivPost, is intended to bring the military to ?full readiness.??Our army should be ready for combat,? said Pavlo Petrenko, Ukraine?s Justice Minister.

In addition to an influx of money, the coup government has called up 40,000 troops and has called on reservists to prepare for war. ?This is our land,? acting coup Prime Minister Arseniy Yatsenyuk told a crowd gathered at the Kyiv statue dedicated to writer and nationalist Taras Shevchenko earlier this month. ?Our fathers and grandfathers have spilled their blood for this land. And we won?t budge a single centimeter from Ukrainian land. Let Russia and its president know this.? On Sunday, Yatsenyuk promised to hunt down and bring Crimean separatists to justice. ?We will find all of them ? if it takes one year, two years ? and bring them to justice and try them in Ukrainian and international courts. The ground will burn under their feet,? he said.The coup leaders on Sunday announced an effort to bolster Ukraine?s newly created National Guard. ?It will have training centers, legal weapons will be distributed. You will have the opportunity to defend the country, with the forces of the National Guard and the security forces,? Yatsenyuk told a cabinet meeting.

On Saturday, during a trip to Ukraine, Senator John McCain called on the Obama administration to arm the junta. ?They only have a few thousand combat troops and would be overwhelmed by the Russians if it came to that. One of their urgent requests is to have us supply them with weapons,? McCain said. ?I will be urging our administration to arrange that transfer as quickly as possible.?