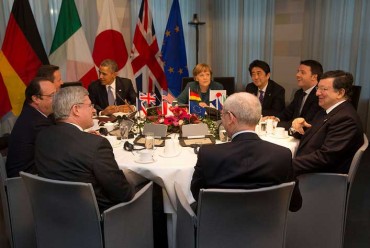 During the G7 nuclear summit in the Netherlands this week, heads of government played a interactive nuclear war game that was designed to test their response to a terrorist plan to set off a ?dirty bomb? in a Western metropolis.

President Obama, German Chancellor Angela Merkel, British Prime Minister David Cameron and Chinese premier Xi Jinping were all a part of the games which showed a series of short films where terrorists planed to use stolen nuclear material to set off a ?dirty bomb? in a unnamed Western metropolis, reports The Telegraph.

A diplomatic source told The Telegraph that the heads of state had to react to the films in real time as they were equipped with a computer tablet with a touch screen displaying responses.

?It could be the city of London or Wall Street, Milan or anywhere,? summit goers were told, according to The Telegraph?s report.

?US officials? said the games where meant to give the state leaders at the summit a ?scare you to death? feeling that would make then think deeply into their reaction during a nuclear attack.

In the end, as it is being reported, the leaders were able to thwart the attack due to their decision making.

During a press conference in the Netherlands on Tuesday, President Barrack Obama said he is more concerned about a nuke going off in Manhattan then he is of any threat coming from Russia.

?Russia?s actions are a problem. They don?t pose the No. 1 national security threat to the United States. I continue to be much more concerned when it comes to our security with the prospect of a nuclear weapon going off in Manhattan,? Obama said in response to a reports question on whether or not Russia is the biggest political foe of the US.