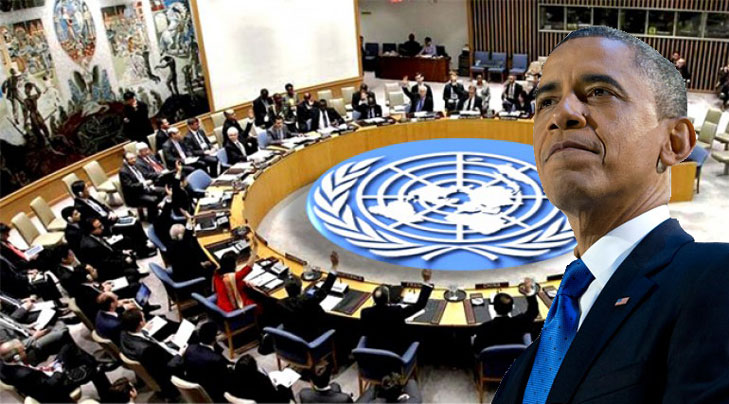 Debkafile reports exclusively from Washington: US President Barack Obama did not wait for Binyamin Netanyahu to finish building his new government coalition by its deadline at midnight Wednesday, May 6, before going into action to pay him back for forming a right-wing cabinet minus any moderate figure for resuming negotiations with the Palestinians.

Banking on Netanyahu’s assertion while campaigning for re-election that there would be no Palestinian state during his term in office, Obama is reported exclusively by our sources to have given the hitherto withheld green light to European governments to file a UN Security Council motion proclaiming an independent Palestinian state. Although Netanyahu left the foreign affairs portfolio in his charge and available to be filled by a suitably moderate figure as per the White House’s expectations did not satisfy the US President.

The White House is confident that, with the US voting in favor, the motion will be passed by an overwhelming majority and therefore be binding on the Israeli government.

To show the administration was in earnest, senior US officials sat down with their French counterparts in Paris last week to sketch out the general outline of this motion. According to our sources, they began addressing such questions as the area of the Palestinian state, its borders, security arrangements between Israel and the Palestinians and whether or not to set a hard-and-fast timeline for implementation, or phrase the resolution as a general declaration of intent.

Incorporating a target date in the language would expose Israel to Security Council sanctions for non-compliance.

It was indicated by the American side in Paris that the Obama administration would prefer to give Netanyahu a lengthy though predetermined time scale to reconsider his Palestinian policy or even possibly to broaden and diversify his coalition by introducing non-aligned factions or figures into such key posts as foreign affairs.

At the same time, both American and French diplomats are already using the club they propose to hang over the Netanyahu government’s head for gains in other spheres.

French President Francois Hollande, for instance, the first foreign leader ever to attend a Gulf Council of Cooperation summit, which opened in Riyadh Tuesday to discuss Iran and the Yemen war, used the opportunity to brief Gulf Arab rulers on Washington’s turnaround on the Israeli-Palestinian issue.

And US Secretary of State John Kerry plans to present the Obama administration’s new plans for Palestinian statehood to Saudi leaders during his visit to Riyadh Wednesday and Thursday, May 6-7. Kerry will use Washington’s willingness to meet Palestinian aspirations as currency for procuring Saudi and Gulf support for a Yemen ceasefire and their acceptance of the nuclear deal shaping up with Iran.

Obama to Back Palestinian State at Security Council
http://endtimeinfo.com/2015/05/obama-to-back-palestinian-state-at-security-council/
IsraelMiddle EastPalestinepeace treaty
Previous ArticleIs the Temple Location Really South of the Dome of the Rock?Next ArticleScientists Warn Of ‘Worst Natural Disaster in History of Nation’