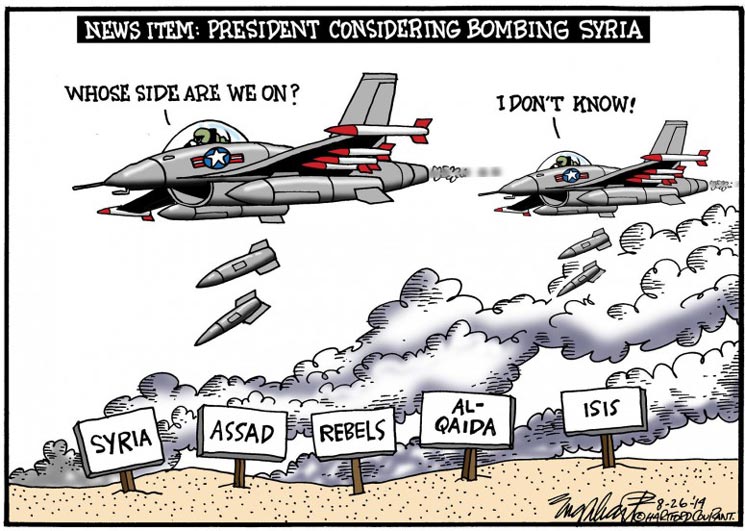 Fresh on the heels of the establishment of an “ISIL-Free Zone” (aka “No-Fly Zone”) in northern Syria along the Turkish border, the United States has quietly announced that it will also extend its airstrike operations to act as the traveling bodyguard of the jihadists it has trained and ?vetted.?

The policy, reportedly authorized by Barack Obama, would involve the US Air Force bombing any force attacking the so-called ?moderate rebel fighters,”including the Syrian military.

The announcement was first reported on Sunday by the Wall Street Journal via anonymous military sources. The senior military official told the WSJ ?For offensive operations, it?s ISIS only. But if attacked, we?ll defend them against anyone who?s attacking them. We?re not looking to engage the regime, but we?ve made a commitment to help defend these people.?

White House National Security Council spokesman, Alistair Baskey, stated ?We won’t get into the specifics of our rules of engagement, but have said all along that we would take the steps necessary to ensure that these forces could successfully carry out their mission.?

Pentagon spokeswoman Commander Elissa Smith, added to the statement by saying ?We recognize, though, that many of these groups now fight on multiple fronts, including against the Assad regime, (Islamic State) and other terrorists.?

The military official quoted by the WSJ as well as Commander Smith’s statements address the main area of concern in regards to the new US policy. Since the ?moderate rebels? who, in reality, are not moderate at all, are locked in combat with the Syrian government forces, the door has officially been opened wider to a direct military confrontation between the United States and Syrian militaries under the guise of protecting “moderates.”

Already, the United States has allowed jihadists to call in airstrikes, with one such example occurring on Friday July 31.

Of course, it should be pointed out that there is no such thing as a moderate rebel fighting inside Syria nor has there ever been such a fighting force operating there. The entirety of the ?opposition? is made up of terrorists, jihadists, and mercenaries, all funded, supported, trained, and armed by NATO and the GCC.

With that in mind, any confrontation that takes place would find the United States in a flagrant act of direct aggression against a sovereign country, even greater than those acts already perpetrated by the U.S. in Syria.

This new policy is yet even more evidence that the US and NATO goal is to destroy the secular government of Bashar al-Assad as well as the entire nation of Syria. While this has been the goal of the U.S. since the beginning of the Syrian crisis, recent weeks have seen a steady increase in provocations and policies designed to bait a Syrian response and create a situation in which U.S. bombing and direct military assaults on the Syrian government could be presented as somehow justified.

It is only a matter of time before Assad?s steadfast repulsion of ISIS and al-Qaeda fighters is used as a justification for American airstrikes on the Syrian government.

Unfortunately, all signs are pointing to the possibility that Syria is about to enter the second phase of destabilization, a phase that Libya knows all too well.