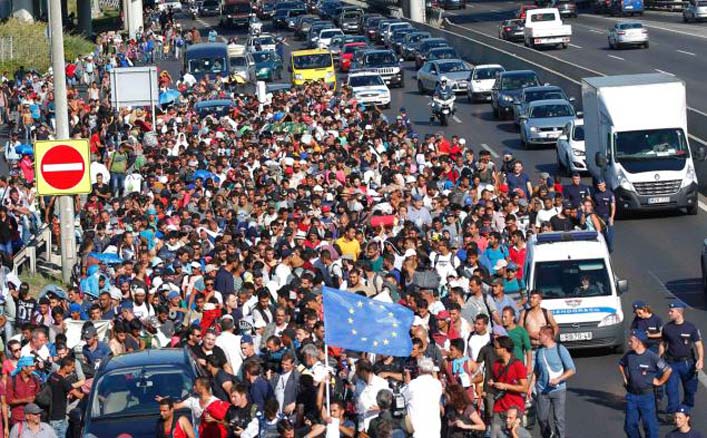 Via kingdomtravelin.com by Tom Foley

According to the UNHCR, Hungary has received 140,000 refugees this year. Hungary?s population is just under 10 million.

That?s 1.4% of the country?s population.

Imagine if 116,000 refugees began landing in Norfolk and made their way toward Washington walking along U.S. Routes 460 and U.S. 1 (sort of equivalent to going from Szeged to Budapest).

Now imaging they walked across one of the many bridges into D.C. and about 3,000 were in and around Union Station demanding they be allowed to travel to New York. One could switch the example to Portsmouth and London in England.

What would the government do? How would Americans react to such?

Now, add to this that Greece, Macedonia and Serbia basically facilitate the refugee stream to Hungary. And that the richer EU nations are all mixed up about how (and who) to receive the refugees.

This is a tragic crisis foisted upon a country that can ill afford it. A country that was already struggling with their own brand of nationalism that is divisive among Hungarians as well as to those outside. A government made up largely of populists who have more than a little distrust of the EU. A government ill equipped for such a crisis, but then, what government is? Clearly the USA is not, nor the UK, nor Germany.

Germany has said they will take in 800,000 refugees this year. But they and Austria are telling Hungary to follow existing travel laws. It takes Germany 5+ months to process a refugee (NPR).

So Hungary is stuck. Refugees pour in 24/7 through my beloved Szeged. Kind folks are taking food, clothes and water to these helpless refugees all over the country. These kind Hungarians are paying for this out of their own pockets. Meanwhile the existing refugee camps all over the country are beyond capacity (I recall there are about a dozen permanent camps from a briefing I received about 15 years ago when taking supplies to Kosovar refugees in the now famous camp in Bicske, Hungary).

When you read the self-righteous American and Western press criticize the Hungarians, remember the earlier statistics.

Tomorrow morning when you see the latest headlines from Budapest, cut Hungary some slack. No one else is doing any better.

Hungary and the refugees
http://endtimeinfo.com/2015/09/hungary-and-the-refugees/
EUEuropeISISrefugee crisisrefugeesSyria
Previous ArticleMuslim Countries Refuse to Take a Single Syrian Refugee, Cite Risk of Exposure to TerrorismNext ArticleOregon campus shooter demanded victims state their religion… Christians were then executed with a bullet to the head