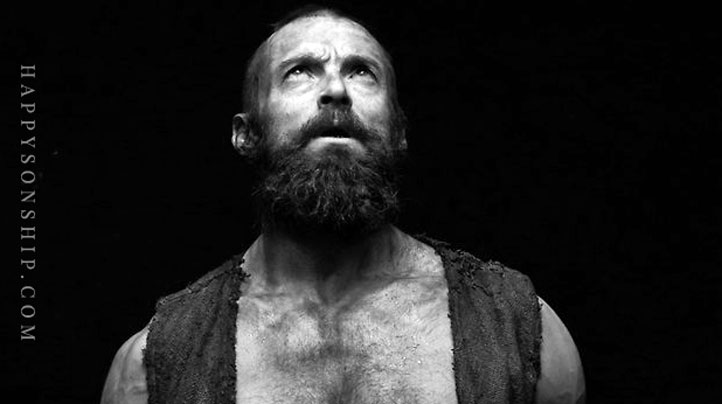 Hugh Jackman is leaving the X-Men but taking the Road to Damascus. His upcoming movie “Logan” will be his last as Wolverine. Next year he will star in a new film on the life of the Apostle Paul. (So if you like Marvel comics and the Bible, you’re in for a treat.)

The movie will be among the most high-profile Hollywood Christian production since Mel Gibson’s The Passion of the Christ. It is a Warner Brothers motion picture that will be produced by Matt Damon, Ben Affleck and Hugh Jackman himself.

Jackman who is a student of transcendental meditation, previously attended the international School of Practical Philosophy. But he told Parade magazine in 2009 that he was raised by a devout, born-again Christian man, who met Jesus in a Billy Graham crusade.

When Hugh was 8 years old, his parents divorced and his mother moved back to England. But he grew up watching faith in action. He compliments his dad by saying, “What he did was herculean, to bring up five kids with a full-time job!”

And every time Billy Graham would come do a crusade in Sydney, Hugh Jackman was in attendance. He was not interested in going but his father was convinced by the promise, “Believe in the Lord Jesus, and you will be saved, you and your household.” – Paul in Acts 16

So here we are.

The award-winning actor is now playing the man who wrote the very words that gave his father hope.

Hugh also had this to say about his dad, “He takes his religion very seriously, and would prefer I go to church. We’ve had discussions about our separate beliefs. I just find the evangelical church too, well, restrictive.”

That word is in contradiction to the Good News; for it is for freedom that Christ has set us free. – Paul in Galatians 5

Yet once again, the church is known for its restrictions, not its freedoms. And once again a talented young man, who was raised in a Christian home, decides to follow a different way.

How is it that our message of peace, hope and joy has been so contaminated? And how come the loudest voice in the church has been the boring-and-angry, God-hates-fags, only-vote-conservative, one?

We happy sons and daughters need to raise the volume! The time has come for arts and permission to be our sound, for smiles and hope to be our style, for freedom and love to be our beauty.

We’ve had enough of Christ being misrepresented by a few Christians. It’s time to love hard, sing louder, and preach Christ crucified (not the “Christ” who is crucifying everyone else!)

We’re not the religion of anti-gay, anti-beer, anti-fun… We are the followers of Jesus. And Jesus came to give us an abundant life.

Not only an abundant life for selfish reasons; it’s a life of true fulfilment. You see, Jesus lived among the broken. He shared his meals with the ungodly, was never stuck inside the prison of religion and is true freedom and everlasting joy.

Restrictive does not define Christ. Neither should it define us.

So why is that a man who was exposed to the ultimate truth has chosen not to believe?

No doubt, it’s his choice. But there’s also the possibility (as with many of our unbelieving family and friends) that the “truth” that was presented to Hugh Jackman was just the ethics of the Christian religion. The rules of Western Christianity. The sad modifications of what otherwise should be a happy, exciting faith.

This Christ is not interested in making Christianity famous. He cares about being Jesus (Salvation) to the infamous ones. He’s passionate about the homeless drunk who stole your cell phone, the young girl stripping at the club, the rich man snorting cocaine, and the famous actor who’s searching for the truth in every philosophy there is.

I think God has personally hired Matt Damon, Ben Affleck and Hugh Jackman, to preach the gospel. (It’s Bourne, Batman and Wolverine to the rescue.)

Because the story of Paul is different to the stories of Moses, or David or Noah. These Old Testament narratives have become another “fantasy” genre in Hollywood. They make for great spectacle. They move the Christian masses. But they stay away from the ultimate message of Scripture.

However, making a movie about the Apostle Paul is a whole other ball game. This is the story of a religious man (a murderer and a terrorist) who has an encounter with the glorified Christ and ends up writing 40% of the New Testament. His story is the Gospel in its purest form.

It has a life of religion and sin, transformed to a life of revelation and sacrifice. It’s the story of a man who thought he knew the truth, until Truth Himself knocked him out in love.

Hugh Jackman gets to play this role. And as all great actors do, he will immerse himself into the life and writings of Saul of Tarsus, the Apostle Paul.

And I have no doubts in my mind, God is getting ready to knock Wolverine out too.

Join me in praying for a radical encounter. I’m believing that the testimony of Hugh’s father, combined with the revelation of Scripture, will become a louder voice than the restrictions and the judgments of the story he was once told.

Jesus is the desire of the nations. Every human being alive (whether they recognise it or not) is hungry for an encounter with Christ. The church has sometimes given the world religion and rules and cheese, so they have been confused. They assumed wrongly. They disregarded Jesus thinking that they had already encountered him.

But the Savior is on a mission to win the hearts of men. He will do whatever it takes to save the lost. He paid too high of a price for grace to be wrongly translated by us. Because, “God desires all people to be saved and to come to the knowledge of the truth.” – Paul in 1 Timothy 2

Jesus stands in the center of culture and Hollywood is paying attention.

And maybe, just maybe, the promise made by God, via Paul, to Hugh’s dad, will be fulfilled, “You and you household will be saved.”

I pray and I hope.