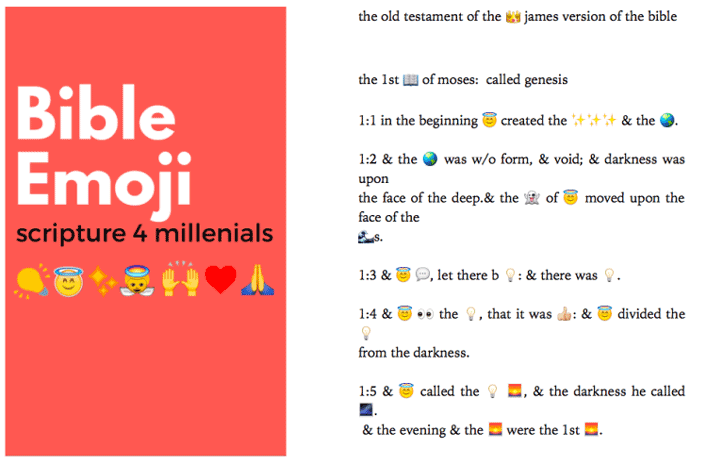 A mysterious person, publicly known only as 😎 , has translated the Bible into emoji. You read that correctly: emoji.

Launching on Apple iBooks this week, the move could be seen as a natural progression.

?A major goal of this whole process was to take a book that I think is very non-approachable to lay readers and try to make it more approachable by removing a lot of its density,? 😎 explained.

Some have also been critical towards the whole idea of the project.

?I?ve received a lot of tweets, some very nice some very, not nice,? said 😎.

?But it?s all worth the goal of making the Bible a little more approachable, to inject some levity, and to get people to look at it, with no particular agenda beyond that. ?

King James Bible Translated with Emojis for Millennial Readers
http://endtimeinfo.com/2016/05/king-james-bible-translated-with-emojis-for-millennial-readers/
Bibleend time
Previous ArticleNBC: Your Children Will be Microchipped “Sooner rather Than Later”Next Article6-6-16: Satanists in Los Angeles Will Construct a Giant Pentagram to “Raise Awareness” For Satanism