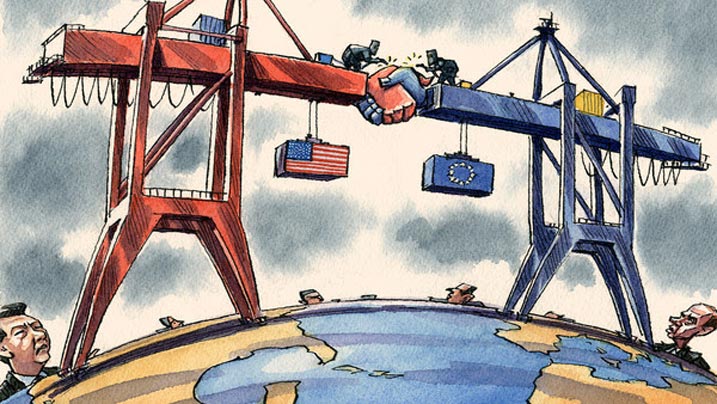 The press refuses to state the obvious: two US Presidential candidates who couldn?t be more different are on the same page when it comes to Globalist trade treaties.

Trump and Bernie-the gunslinger fast-talking cowboy and the programmatic socialist.

If the press did connect the dots, it would be admitting that millions of Americans from both candidates? camps recognize the danger of these treaties?and pumping up that revelation would bring a major threat to the Globalist water-boy in the White House.

He is Barack Obama. When a preliminary vote on the Trans-Pacific Partnership (TPP) stalled in Congress last year, Obama and his team jumped on the phones and stayed there night and day trying to drum up support. And now, when the UK is considering an exit from the European Union, thus throwing a large monkey wrench in the US-EU Trans-Atlantic Trade and Investment Partnership (TTIP), Obama flies to London, where, shockingly, he lowers the boom on the British government and the public, warning that an independent UK would have to stand at the back of the line when it comes to formulating a separate trade pact with the US.

Obama, as you might remember, was tutored on foreign policy, after his election in 2008, by Zbiggie Brzezinski, the intellectual water-boy for David Rockefeller, the king of Globalism, Planet Earth.

The nation state as a fundamental unit of man?s organized life has ceased to be the principal creative force: International banks and multinational corporations are acting and planning in terms that are far in advance of the political concepts of the nation-state.

These Globalist trade deals are, indeed, exercises in eliminating nations and turning over the economy of the world to mega-corporations.

For example, as The Independent reported (10/16/15), the TTIP embodies Investor-State Dispute Settlements (ISDS), whereby corporations can sue governments when their profits are endangered.

For instance, Monsanto could sue the EU for refusing to accept the import of GMO food crops, thereby enabling a Monsanto end-run around Europe?s tight restrictions on GMOs.

There are around 500 similar [ISDS] cases of businesses versus nations going on around the world at the moment and they are all taking place before ?arbitration tribunals? made up of corporate lawyers appointed on an ad hoc basis, which according to War on Want?s John Hilary, are “little more than kangaroo courts” with “a vested interest in ruling in favour of business.”

A nation has its own court system? How quaint. How outmoded. Let corporations take over.

Here are other agreements embedded in the TTIP Treaty?which by the way, is a super-secret contract very few people are permitted to read as negotiations now wrap up. The Independent cites several leaked points:

Under the TTIP, the provincial European notion of testing chemicals for safety before unleashing them on the population would be bulldozed by the superior American method: drench the people, ignore the consequences, and invent a consensus that the chemicals (e.g., pesticides) are harmless. Good luck with the consequences, Europe.

There would far less monitoring of the clinical trials of new medical drugs. Translation: pharmaceutical companies would be able to conceal trials that reveal devastating harm. More chemical assault against the populations of both Europe and the US.

Food safety and environmental standards would be compromised on both sides of the Atlantic.

European public services (water, health, education) would open their doors to privatization by US companies looking for ways to turn these services into profit-making enterprises?at higher prices. Big Pharma, with its load of toxic drugs, would exploit new markets by infiltrating nations? public health services.

Consider the recent astounding action of US Trade Representatives in Europe. Using the TTIP negotiations as a blunt weapon, US Trade Reps pressured the European Union (EU) to modify its stance on pesticides.

Note: this repressive and criminal action didn?t even involve a treaty that had been ratified. The pressure was all about the so-called positive economic impact the TTIP would have, when passed, for Europe. And in the face of that fictitious money benefit, and the threat of its removal (by ditching the TTIP negotiations), who would dare curb the import and use of chemicals that achieve something as ?minor? as disrupting human endocrine systems and causing male infertility and cancer?

This is the sort of judgment we can look forward to, if the TTIP is ratified.

The TPP (Trans-Pacific Partnership), another of the blockbuster trade treaties on the table, involves 12 member nations in the Pacific region. The TPP contains similar provisions for mega-corporations: the ISDS tribunals that supersede national courts; the shifting of controls on chemical safety to corporations; greater roughshod international intrusions by pharmaceutical and GMO/pesticide companies.

It?s a grotesque frame-up and set-up masquerading as a more equitable global economy.

It?s more than interesting that the biggest voting bloc in the US?the sum of Trump and Bernie supporters?are solidly against these Globalist treaties. But there the supporters are, on opposite sides of the fence, glaring at each other, while Hillary Clinton rides her horse down the center stripe, her blood-soaked hands on the reins, promising a united future for America.