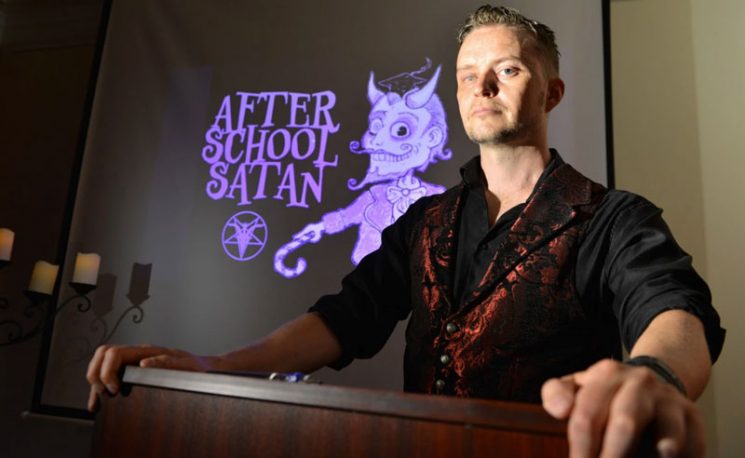 The Satanic Temple of Utah plans to unveil a new after school program Monday designed for the nation’s elementary-age children, according to the Salt Lake Tribune.

The group plans to petition schools so its curriculum can be part of official clubs as early as this fall. The Satanists are targeting Utah, New York, Massachusetts, Arizona, Minnesota, Louisiana and Florida to include the curriculum.

“It’s critical that children understand that there are multiple perspectives on all issues, and that they have a choice in how they think,” the Temple’s co-founder Doug Mesner told the Tribune.

Mesner told reporters the group doesn’t actually promote devil worship, instead it eschews any sort of belief in a supernatural being, supporting “scientific rationality” instead. The planned curriculum includes “healthful snacks,” “creative learning activities,” “a science lesson” and “an art project.”

“We think it’s important for kids to be able to see multiple points of view, to reason things through, to have empathy and feelings of benevolence for their fellow human beings,” Utah chapter director Chalice Blythe told the Tribune.

Despite the group’s claims that it has no religious intentions, the graphics on its after school website are filled with horns and other signs traditionally associated with Satan. The group appears to me mostly anti-Christian, as most of the pages center around down-talking evangelical programs.

The frequently asked questions portion of the site ends with the question, “Is this not a Christian Nation?” After School Satan’s answer is simply, “No, It is not.”

The group argues that since evangelical organizations have clubs and programs designed for elementary-aged children, they should be allowed to teach kids, too. Group leaders are targeting a limited number of schools that already have such clubs organized by evangelical leaders called the “Good News Club.”

The Good News Clubs are sponsored by the Child Evangelism Fellowship (CEF), and were largely excluded from public schools because of their supposed violation of seperation of church and state.

Mesner asserted, “While the Good News Clubs focus on indoctrination, instilling children with a fear of hell and God’s wrath, After School Satan Clubs will focus on free inquiry and rationalism, We prefer to give children an appreciation of the natural wonders surrounding them, not a fear of an everlasting other-worldly horror.”

After a Supreme Court ruling in 2001 that such clubs could not be excluded from public schools on the basis of free speech, CEF’s reach grew to 3,560 clubs across the nation.

The Christian advocacy group Liberty Counsel said the Satanic Temple was well within its rights to pursue such a program.

“I would definitely oppose after-school Satanic clubs, but they have a First Amendment right to meet,” founder Mat Staver said, according to the Tribune.

“I suspect, in this particular case, I can’t imagine there’s going to be a lot of students participating in this. It’s probably dust they’re kicking up and is likely to fade away in the near future for lack of interest.”

Donald Trump talked about the “war on Christianity” after he officially won the party’s nomination earlier in July. Trump asserted that liberals were “chipping away at Christianity.”

Will Satanists Lead Your Child’s After-School Club?
http://endtimeinfo.com/2016/08/will-satanists-lead-your-childs-after-school-club/
ChristianityLucifersatanism
Previous ArticleChristians Protest Satanic Prayer at City CouncilNext ArticleJesus is coming… and he wants you to elect him as MP for Burnley