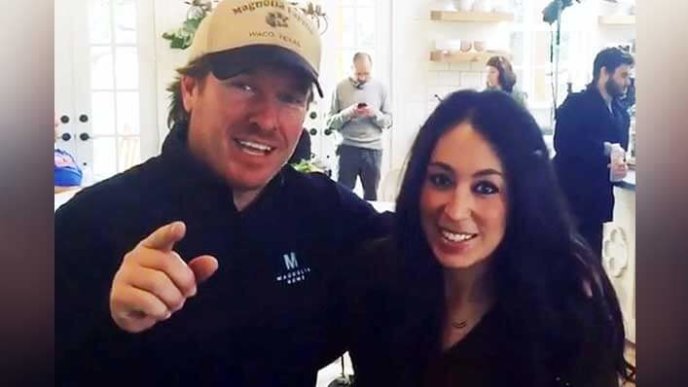 We need to give the Gaines’ credit for finding a classy way to navigate this faux “controversy” without compromising their belief system.

We all agree that Christians should be unafraid to profess the Biblical truth on any subject, whether it’s gay marriage or anything else. But at the same time, we shouldn’t allow ourselves to be baited by those who are dishonest and insincere and uninterested in dialogue.

Notice that Christ refused to speak to Herod or answer any of his questions. Not because Christ was afraid or ashamed, obviously, but because Herod was not interested in the answers. He was trying to make a spectacle of Him, and Our Lord would not cooperate.

I think it’s appropriate and wise to utilize that strategy in our culture sometimes, just as Chip and Joanna have done here. They’ve said, essentially, “We stand by our beliefs but we are not going to get into this with you because you are not sincere or genuine. You just want to find something to use against us.”

TV’s favorite power couple, Chip and Joanna Gaines, are taking time to renovate in 2017—but not the way they are known for in their hit HGTV show, Fixer Upper.

The Waco, Texas, couple is riding the waves of success with the most popular show on HGTV, a New York Times Best Selling book, multiple retail shops, a real estate business, hundreds of home renovations, and they were just recently credited with revitalizing the city of Waco with their show and businesses.

Joanna’s farmhouse style design aesthetic, and her undying love for both shiplap and her husband, combined with Chip’s goofiness, demolition excitement and adoration for his sweet wife, continues to make us all wish Chip and JoJo were our best friends. (And neighbors—could you make my house look like that?)

A controversial (and downright silly) BuzzFeed article was published on Nov. 29., criticizing the couple for being members of a church whose pastor has allegedly spoken out against homosexuality.

Pastor Jimmy Seibert delivered a message in 2015, following the Supreme Court’s decision to legalize same-sex marriage. He defends his beliefs saying, “God defined what marriage is—not you, or I, or anyone. God defined what male and female are. As a person of faith, I just decided that God’s going to be right.”

Naturally, because of the Gaines’ success, and their affiliation with the church, the controversial message became a question of their character, and that of HGTV.

Since the the article was published, the renovation power couple has remained virtually silent—until now.

Chip took to the Magnolia blog on Jan. 2, more than a month after controversy broke. His post is nothing short of what we would expect from the Gaines family—extremely classy, witty and full of Jesus. He shared his heart, and the couple’s desire to “renovate in 2017.”

Jo and I sometimes don’t see eye to eye on stuff. She looks at something one way and in her gut she thinks she’s right and I look at it an entirely different way. I wish that she could get with the program and just see things the way that I do. (Of course, I’m kidding – we all know Jo’s usually right.) If Joanna and I, who are best friends, don’t see lots of things the same way – how on earth do we expect a world of strangers to magically align? The reality is, we may not all get on the same page and I think that’s okay.

This past year has been tough. In my lifetime, I can’t recall humanity being more divided. Plenty of folks are sad and scared and angry and there are sound bites being fed to us that seem fueled by judgement, fear and even hatred. Jo and I refuse to be baited into using our influence in a way that will further harm an already hurting world, this is our home. A house divided cannot stand.

If there is any hope for all of us to move forward, to heal and to grow – we have got to learn to engage people who are different from us with dignity and with love. Joanna and I have personal convictions. One of them is this: we care about you for the simple fact that you are a person, our neighbor on planet earth. It’s not about what color your skin is, how much money you have in the bank, your political affiliation, sexual orientation, gender, nationality or faith. That’s all fascinating, but it cannot add or take away from the reality that we’re already pulling for you. We are not about to get in the nasty business of throwing stones at each other, don’t ask us to ’cause we won’t play that way.

In 2017: We have decided to change the conversation.

You wanna talk about how to build bridges between people that disagree? We want to be a part of that conversation. Do you want to talk about healing and compassion and kindness and restoration? We’re in the restoration business, we can for sure make time for that.

I think we are all here for a reason. I think we all have a call on our lives. Your role is not my role, and thank goodness, because there is so much unique and important work to be done. Jo and I feel called to be bridge builders. We want to help initiate conversations between people that don’t think alike. Listen to me, we do not all have to agree with each other. Disagreement is not the same thing as hate, don’t believe that lie.

Also, let’s cut each other a little slack. This living out loud thing is not for the faint of heart. Jo and I don’t want to hide, we want to live brave & bold lives and we wish that same thing for you as well. But words can cut deep and having someone misunderstand your intentions can hurt as much as just about anything. If I misjudge people and am wrong, I want to be wrong having assumed the best about them. The bottom line is, I would rather be loving than be right.

Our family wants to fight for a world that knows how to lovingly disagree. We believe it starts when we operate from a position of love in all things. If your position only extends love to the people who agree with you, we want to respectfully challenge that position. We propose operating with a love so real and true that you are willing to roll up your sleeves and work alongside the very people that are most unlike you. Fear dissolves in close proximity. Our stereotypes and vain imaginations fall away when we labor side by side. This is how a house gets unified.

Think about it for a minute:  This could be one of the greatest restoration stories of all time.

Who’s ready to get to work?

Despite one bad editor trying to take down one of America’s favorite couples, members of the LGBT community have come to the Gaines’ defense.

In wake of an attack on their character and beliefs, Chip and JoJo have once again proven the power of grace and love in a world full of hate.