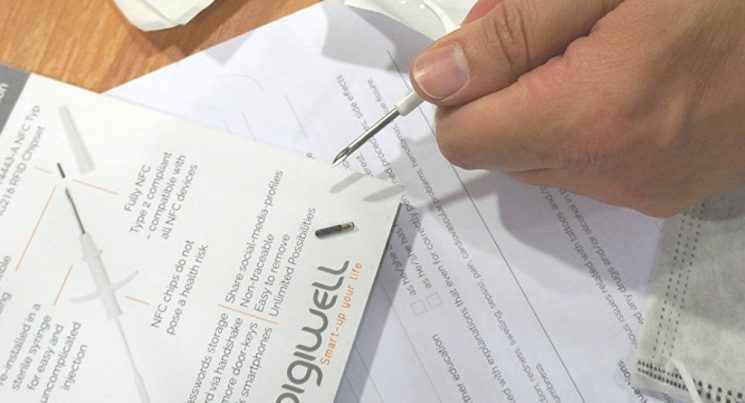 Implanting radio frequency identification (RFID) chips has made headlines again as a company in Belgium, NewFusion, has implemented the device for its employees.

Surgically implanted in the hands of its employees, the tiny transmitters broadcast a simple code that allows employees to access company facilities and computer systems.

The chips, now growing in popularity especially in Australia and Europe, are about the size of a grain of rice and range in price from $80-$100.

Placed under the skin between the thumb and index finger, they behave like a traditional electronic key card, yet one that won’t be left home on the kitchen table.

Thankfully, at least for now, NewFusion has offered a chip-enabled ring for those who would prefer to avoid being implanted.

Supporters of the move toward implanted ID chips of course inevitably point to the incredible convenience of embedding your identity number inside your skin, but in their headlong rush to embrace this brave new world, they overlook many of the both obvious and frightening concerns as well as the more mundane drawbacks of “getting chipped”.

As several astute writers have already pointed out, what happens when an employee of NewFusion leaves the company?

Rather than turning a key fob in at the HR office, now a surgical procedure is needed to remove the implant.

It isn’t hard to imagine a world in which enough companies “chip” their employees that a surgical procedure would be required for employment in the same way that a drug test often does today.

For those arguing for convenience, these ambulatory surgeries hardly seem convenient at all.

In the Czech Republic, implanted RFID chips are being used in connection with bitcoin by a nonprofit called Paralelni. Bitcoin, a virtual currency that stores value in a cryptographic blockchain shared around the world, has proven to be a playground for hackers exploiting the digital phenomenon.

The only difference here is that when your bitcoins are taken, you are left with a microchip embedded in your body to remind you of your newly empty bank account.

NewFusion is a digital marketing firm that asks its employees to forego both their comfort and safety all in the name of convenience.