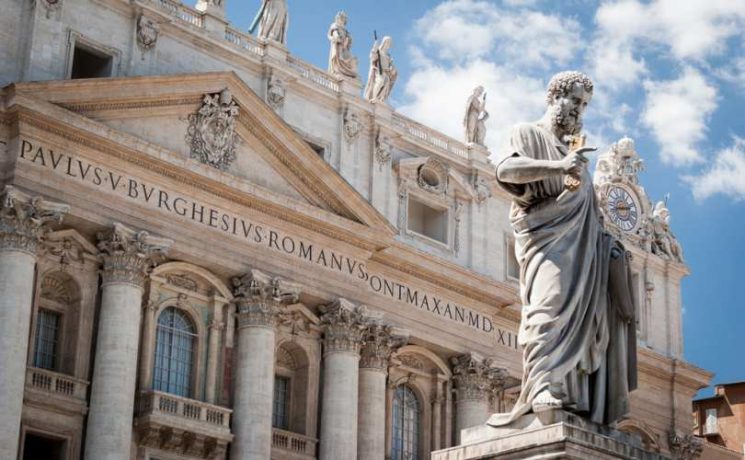 Canon lawyers, theologians, and scholars will be meeting in Paris in two weeks to discuss a topic that has never been the focus of a Catholic conference before: How to depose a heretical pope.

Titled Deposing the Pope: Theological Premises, Canonical Models, Constitutional Challenge, the conference seeks to explore the mechanisms that are built into the Catholic Church for dealing with a pope who openly teaches falsehood and even heresy.

Speaking at the conference will be University of Paris Professor Laurent Fonbaustier who published a 1200 page book last year on the topic that was titled The Deposition of the Heretical Pope.

The conference includes 15 speakers who will be giving a range of talks on the subject matter with titles such as “Conciliarism and the Deposition of a Pope Through the Prism of Gallicanism,” “The Downfall of the Pope: Between Renunciation and Deposition,” and “The Deposition of John XXII and Benedict XIII at Constance, 1415–1417.”

Speaking at the conference are Professors Nicolas Warembourg and Cyrille Dounot, two of the 45 Catholic academics who last June submitted an appeal to the Dean of the College of Cardinals in Rome requesting a repudiation of erroneous propositions they found in Pope Francis’ exhortation Amoris Laetitia.

The conference comes after four years of Francis at the helm of the Barque of Peter. During this time the Pope, and the people he has put into key positions, have steered the Church in a direction that would have been unthinkable to faithful Catholics under the two previous pontiffs of John Paul II and Pope Benedict XVI.

Francis’ ambiguous speeches and especially his papal writings have turned cardinal against cardinal, bishop against bishop, and lay-faithful against lay-faithful. Doctrinal confusion has resulted in pastoral guidelines being issued based on his writings that allow Holy Communion to be given to those living in adultery.

Last November Vaticanist Giuseppe Nardi reported that a 1975 theological study by the learned Brazilian layman Arnaldo Vidigal Xavier da Silveira was making the rounds in the Vatican. The layman examined in his work titled The Theological Hypothesis of a Heretical Pope whether it is possible for a pope to be or become a heretic, and if so, what consequences would follow from this.

Reported Nardi: “Three-and-a-half years after the start of his pontificate, Pope Francis is reaching his limits. The impression, given by means of gestures and words, of a latent intention to change the doctrine of the Church must at some point either take on definite form or else it must collapse,” he wrote at that time.

“Francis finds himself cornered by means of the very atmosphere he himself is responsible for creating. It’s no longer about a spontaneous utterance on this or that, which remains improvised and non-binding. His pastoral work and his leadership skills, which demand a sense of responsibility and an exemplary character, are reaching their limits. This could cause Francis [‘s pontificate] to fail,” he added.

The conference comes three months after Cardinal Raymond Burke gave an interview in which he explained that if a pope were to “formally profess heresy he would cease, by that act, to be the Pope.”

Burke said in the December 2016 interview that there is a process within the Church for dealing with such a situation, adding his hope that “we won’t be witnessing that at any time soon.”

Also in December American canon lawyer Dr. Edward Peters addressed the question of what could be done if a pope were found to be heretical.

Peters writes that the “crucial question” from a canonist’s perspective is “who would determine whether a given pope has fallen into heresy” since Canon 1404 states that the “First See is judged by no one.”

He found in canonical tradition, however, the position that if a general council determined that a pope had committed heresy, by that very fact he will have effectually cut himself off from the true vine, thereby forfeiting his office.

Comments Peters: “…however remote is the possibility of a pope actually falling into heresy and however difficult it might be to determine whether a pope has so fallen, such a catastrophe, Deus vetet [God forbid], would result in the loss of papal office.”

The location for the upcoming conference is significant, reports Church Militant. It was in the 1300s the University of Paris explored the question of what could be done with the possibly heretical Pope John XXII, who denied the doctrine that the souls of the just are admitted to the beatific vision after death, a position he retracted on his deathbed.