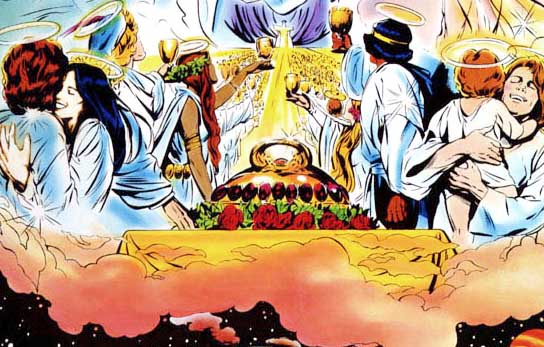 –This is one party you don’t want to miss!

How would you like to attend the grandest, most glorious and thrilling wedding party that’s ever been held? Believe it or not, you’re already invited–everybody is invited–but you have to accept the invitation. Before explaining how to do that, here’s when and where this great party will be held and what you can expect:

Jesus said that immediately after the second half of the Antichrist’s seven-year reign–the terrible three-and-a-half-year period known as the Great Tribulation–He, Jesus, will return “on the clouds of Heaven with power and great glory” to rescue and resurrect all of those who have received Him as their Savior (Matthew 24:29-31).

When He does, all those who accepted Jesus as their Savior before they died will receive new bodies and rise up out of their graves. All those who have accepted Him and are still alive will likewise be suddenly changed. Then, in the same instant, all of them will fly up to meet the Lord (1 Corinthians 15:51-52; 1 Thessalonians 4:16-17).

Then Jesus is going to take them all to a great big party–the biggest, happiest, most exciting party they’ve ever been to or even imagined! They’ll see Jesus face to face and get to meet all of the great saints and apostles of the Bible, as well as all of the other wonderful folks who loved and received the Lord during their lifetime.

This wonderful party, the marriage supper of the Lamb, will be held in God’s heavenly city–the greatest, most beautiful and wonderful place ever created–and is described in Revelation 19:6-9:

And I [the apostle John, describing his vision] heard, as it were, the voice of a great multitude, as the sound of many waters and as the sound of mighty thunderings, saying, “Alleluia! For the Lord God Omnipotent reigns! Let us be glad and rejoice and give Him glory, for the marriage of the Lamb has come, and His wife has made herself ready.” And to her it was granted to be arrayed in fine linen, clean and bright, for the fine linen is the righteous acts of the saints. Then he [the angel that showed John this vision] said to me, “Write: ‘Blessed are those who are called to the marriage supper of the Lamb!'” And he said to me, “These are the true sayings of God.”

There will be plenty of laughter and singing and music and dancing and love for everyone! And if that’s not enough, the saved will really appreciate how blessed they are to be with the Lord in this great marriage supper when they consider what’s happening on earth at this time!

Right after the Lord rescues His own out of the Great Tribulation, the horrific vials of the great “wrath of God” are going to be poured out upon the Antichrist and his people in the form of horrible plagues, such as the world has never known (Revelation chapter 16). While the saved are having a wild party and lots of fun upstairs–a heaven of a time in Heaven–it’s going to be hell on earth downstairs!

Like an invitation from above, Jesus calls, “Come, My people, enter your chambers, and shut your doors behind you; hide yourself, as it were, for a little moment, until the indignation is past. For behold, the Lord comes out of His place to punish the inhabitants of the earth for their iniquity” (Isaiah 26:20-21). The Bridegroom comes for His Bride, takes her safely away into the bridal chamber, shuts the door, and we have the marriage celebration with Him, while the wicked, Christ-rejecting forces and followers of the Antichrist partake of the wrath of God.

At this time the saved will not only meet the Lord and enjoy the wonderful marriage supper of the Lamb, but they will also face the “judgment seat of Christ,” in which they will be judged and rewarded or chastised individually according to their deeds and faithfulness, and will enter into the particular places that Jesus has seen fit for them to occupy in His kingdom on earth (2 Corinthians 5:10; Romans 14:10,12).

Jesus said, “Behold, I am coming quickly, and My reward is with Me, to give to every one according to his work” (Revelation 22:12). Every saved Christian will be rewarded at the throne of Christ according to his works. Don’t get this judgment and rewarding of the saved mixed up with the final judgment of the unsaved, which is an entirely different event and will take place 1,000 years later, after the Millennium, when the unsaved are all raised from the dead to meet God at the “great white throne judgment,” as described in Revelation chapter 20.

Do you want to accept that invitation to the marriage supper of the Lamb?–Then simply ask Jesus into your heart, if you haven’t already.

Do you want to also receive commendations and rewards?–Then “love the Lord your God with all your heart, with all your soul, and with all your mind … [and] love your neighbor as yourself” (Matthew 22:37-39). It says in the Bible that God will not forget anything you do out of love (Hebrews 6:10). He has a big book and is writing it all down (Malachi 3:16-17). Even when nobody else seems to see or appreciate the good you do, God sees and will remember.

See you at the grandest, most glorious and thrilling wedding party that’s ever been or ever will be!

The Marriage Supper of the Lamb
http://endtimeinfo.com/2011/01/the-marriage-supper-of-the-lamb/
end timelast seven yearsmarriage supperrapture
Previous ArticleFrance proposes new monetary system with US dollar having less influenceNext ArticleAnswers to Some of the Most Frequently Asked Questions about Salvation