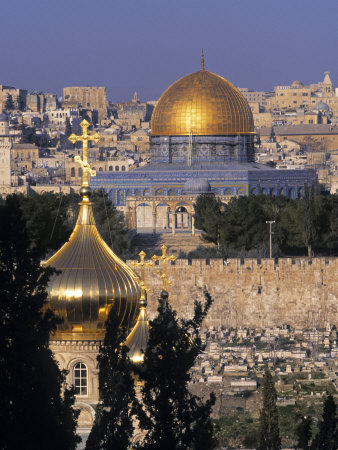 According to Bible prophecy, the event that will clearly mark the start of the Antichrist’s seven-year reign is the signing of a pact or “covenant”: “He [the Antichrist] shall confirm a covenant with many for one week [seven years]” (Daniel 9:27a). Because the pact is called a “holy covenant” in Daniel 11:28-30, it appears to have something to do with religion or religious rights.

One widely held view is that the covenant will, in part, make it possible for the Jews to rebuild their Temple on Mount Moriah in Jerusalem. The rebuilding of the Temple is an important Endtime event because it is crucial to the fulfillment of other key Bible prophecies, some of which also involve the ancient Jewish practice of blood offerings, which can only be carried out in the Temple in Jerusalem. (Blood offerings ceased in 70 AD, when the Romans razed the last Temple.)

We don’t yet know how this conflict will be resolved, but it could happen with the Antichrist’s seven-year covenant.

There is now a drive in Israel and among Jews worldwide, spearheaded by the Temple Institute situated in Old Jerusalem, to rebuild the Temple. There have even been reports that much of the Temple has already been prefabricated and is waiting to be assembled. The Temple Institute has also already fabricated the sacred vessels and garments to be used in the Temple, and has these on display in their headquarters. Photographs of some of these can be viewed on the Temple Institute Web site: http://www.templeinstitute.org/main.html.

The first Temple was built under the direction of King Solomon and dedicated in 960 BC (1 Chronicles 22:1-19; 1 Kings, chapters 5-7). To facilitate the building of the first Temple, a retaining wall was built around the summit of Mount Moriah, and the area inside the wall leveled. Part of this retaining wall?referred to in recent centuries as the Wailing Wall?remains today. The foundation of the ancient Temple’s altar was the rock upon which Abraham started to sacrifice Isaac. After looting the Temple during his first attack (2 Kings 24:13), Babylon’s King Nebuchadnezzar burned it to the ground in 586 BC (2 Kings 25:9,13-17).

In 19 BC, Herod the Great, the Rome-appointed client-king of Judea, began enlarging and beautifying the Temple complex. The project was completed in 64 AD, during the rule of Agrippa II. The Temple was razed by the Romans only six years later, fulfilling Jesus’ prophecy in Matthew 24:2: “Do you not see all these [temple buildings]? Assuredly, I say to you, not one stone shall be left here upon another, that shall not be thrown down.”

In 687 AD, Abd al-Malik, the fifth Caliph of the Arab Umayyad dynasty, built a shrine called the Dome of the Rock over the rock that he believed was previously the altar rock in the Jewish Temple?a site that is also sacred to Muslims because it is from here that the prophet Muhammad is believed to have made his miraaj, or night journey, into the heavens. The Dome of the Rock still stands?and this is the crux of the problem: The Muslims would never agree to the destruction of the Dome of the Rock so the Jewish Temple can be rebuilt on this site, and it is extremely unlikely that the Jews would ever consider rebuilding their Temple anywhere else.

We don’t yet know how this conflict will be resolved, but it could happen with the Antichrist’s seven-year covenant. And because Jerusalem is the most holy city to the Jews, as well as the third most holy city to the Muslims (after Mecca and Medina), and also holy to Christians, it’s possible that the covenant will declare Jerusalem an international city and assure free and equal access and worship to people of all faiths.

Two recent developments are particularly significant to Bible prophecy, and both are related to the rebuilding of the Jewish Temple: In January 2005, the Sanhedrin?the highest ruling body and court of justice among the Jewish people in the time of Jesus?convened for the first time in 1,600 years. Two weeks later, on February 9, 2005, the Sanhedrin began to consider the rebuilding of the Temple and reinstitution of ancient animal sacrifices as commanded in the Law of Moses.

The fact that a reestablished Sanhedrin is now considering the rebuilding of the Temple after 2,000 years is extremely important to Bible prophecy. Are we nearing the final events that will lead up to the Second Coming of Jesus? It certainly seems so!