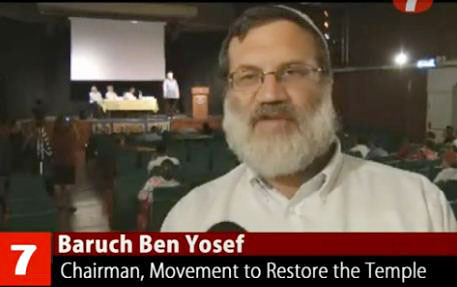 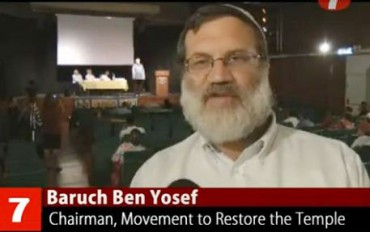 The Holy Temple Conferences by the Movement for Temple Renewal, with the participation of leading temple-oriented organizations, took place in the Great Synagogue in Jerusalem on Sunday.

The conference included lectures on different matters connected to the Temple Mount and to the rebuilding of the Temple.

?We?re dealing with matters of the press, the government, matters related to the ascent to the Temple Mount by women,” Baruch Ben Yosef, Chairman of the Movement to Restore the Temple, told Arutz Sheva.

Following the lectures, a general meeting was held inside the Great Synagogue, where participants heard more lectures and music related to the Temple. They then ate what is called the Seudat Hamikdash ? the Temple Repast.

?This is all in order to raise awareness of the Holy Temple, the Temple Mount, and its significance to the Jewish people,? explained Ben Yosef.

He said that it is no coincidence that the conference took place this week, as the Palestinian Authority prepares to present its unilateral statehood bid to the UN.

?It?s obvious that the vacuum caused by there being no Temple in Jerusalem and a lack of Jewish presence on the Temple Mount led the Arabs to call the creation of a new state,? said Ben Yosef.

Yehudah Glick, Chairman of the Temple Mount Heritage Foundation, told Arutz Sheva that he believes the anti-Israel gatherings around the world this week are a direct result of the lack of Jewish presence on the Temple Mount.

?Jewish presence on the Temple Mount is a natural part of the view,? he said. ?We?re here trying to gather our energy and work together towards this goal.?

From whatever point on the globe they are, Jews pray facing the Temple Mount and have done so since the first Holy Temple was built during King Solomon’s reign. Their prayers included the hope to rebuild the Temple and ascend the Temple Mount to worship there. Seeing mosques standing on the site from the 7th century on due to the Muslim conquest of Jerusalem was a difficult pill for the Jewish people to swallow, in addition to mourning the Second Temple’s destruction by the Roman legion in the 1st century.

When Israel regained Judaism’s holiest site, the Temple Mount, in the 1967 Six Day War, the euphoria of Jews worldwide that saw hundreds of thousands walking excitedly to the area on the days following the war, soon turned to dismay when then COS Moshe Dayan gave back control of the Temple Mount to the Moslem Wakf religious authority.

Whereas there is rabbinical controversy on whether it is permissible for Jews to walk on all of the Temple Mount since it is not agreed which parts were for High Priests only, that did not preclude its remaining under Jewish control.

The Wakf lost no time in seeing to it that it is illegal for Jews to pray there and in attempting to erase all archaeological evidence, of which there is an abundance, of Jewish presence on the Temple Mount. Jews were left to pray at the Western Wall, an outer wall of the site, as they had when Moslems were in control, and before Jordanian occupation of the Old City made it off limits from 1949-1967.