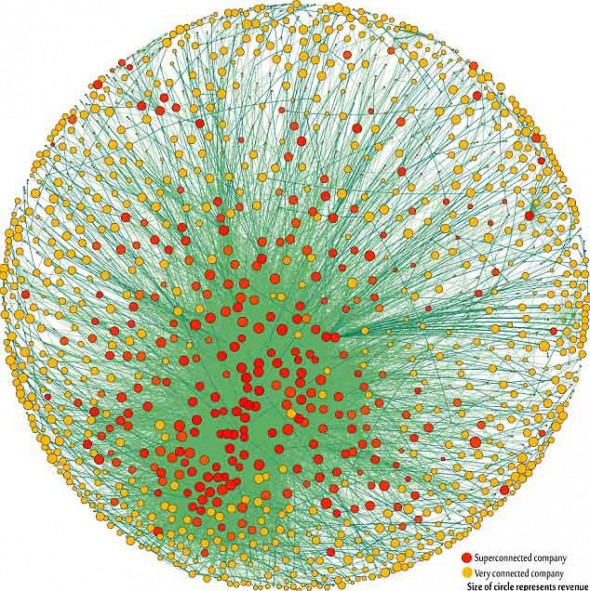 Research found that 147 companies formed a ‘super entity’ within group, controlling 40 per cent of its wealth

A University of Zurich study ‘proves’ that a small group of companies – mainly banks – wields huge power over the global economy. The study is the first to look at all 43,060 transnational corporations and the web of ownership between them – and created a ‘map’ of 1,318 companies at the heart of the global economy.

The study found that 147 companies formed a ‘super entity’ within this, controlling 40 per cent of its wealth. All own part or all of one another. Most are banks – the top 20 includes Barclays and Goldman Sachs. But the close connections mean that the network could be vulnerable to collapse.

‘In effect, less than one per cent of the companies were able to control 40 per cent of the entire network,’ says James Glattfelder, a complex systems theorist at the Swiss Federal Institute in Zurich, who co-wrote the research, to be published in the journal PLoS One.

Some of the assumptions underlying the study have come in for criticism – such as the idea that ownership equates to control. But the Swiss researchers have no axe to grind: they simply applied mathematical models usually used to model natural systems to the world economy, using data from Orbis 2007, a database listing 37 million companies and investors.

Economists such as John Driffil of the University of London, a macroeconomics expert, told New Scientist that the value of its study wasn’t to see who controlled the global economy, but the tight connections between the world’s largest companies.

The financial collapse of 2008 showed that such tightly-knit networks can be unstable. ‘If one company suffers distress,’ Glattfelder says, ‘This propagates.’

The research requires more analysis, but it could be used to look for the weaknesses in the network of global wealth, and prevent future financial disaster. Looking at ‘connectedness’ also puts paid to conspiracy theories about the world’s wealth – companies connect to highly connected companies for business reasons, rather than world domination. The ‘core’ of 147 companies also represents too many interests to wield real political power – but it could act ‘as one’ to defend common interests. Sadly for market reformers, resisting change may be one such common interest.