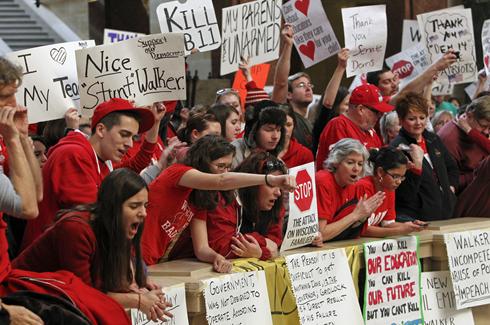 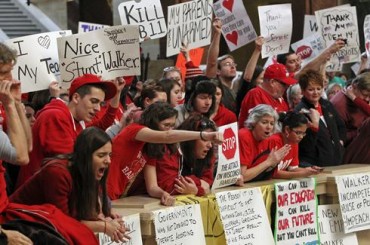 ?Hundreds of cops have just marched into the Wisconsin state capitol building to protest the anti-Union bill, to massive applause. They now join up to 600 people who are inside.?

?Police have just announced to the crowds inside the occupied State Capitol of Wisconsin: ?We have been ordered by the legislature to kick you all out at 4:00 today. But we know what?s right from wrong. We will not be kicking anyone out, in fact, we will be sleeping here with you!? Unreal.?

Jim Palmer, executive director of the Wisconsin Professional Police Association, is calling on officers to spend the night Friday and Saturday.

?We may not have a big group but we’re going to try to have a presence just the same.?

The call for officers to protest is significant, because the state has announced it will close the Capitol building Sunday at 6 p.m. Palmer says that his members, however, won’t defy an order to close the building. ?Our officers will comply with an order of law enforcement.?

Many officers have been on both sides of the protests, working to provide security and then coming back later to join the protests in civilian clothes, Palmer says.

Palmer says officers providing security have been impressed with how well behaved and peaceful the protesters have been.

?Law enforcement officers know the difference between right and wrong, and Governor Walker’s attempt to eliminate the collective voice of Wisconsin’s devoted public employees is wrong,” Palmer says. “That is why we have stood with our fellow employees each day and why we will be sleeping among them tonight.

Sources: The Huffingtonpost, The Daily Page