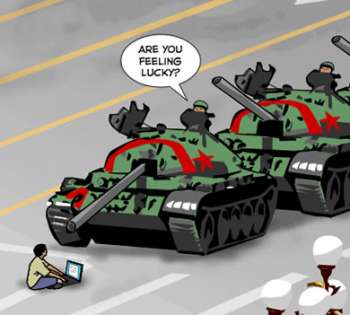 The Australian government is set to intensify its war against Internet freedom by forcing web users to install state-approved anti-virus software. If they fail to do so, they will be denied an Internet connection, or if their computer is later infected, the user?s connection will be terminated.

?Australians would be forced to install anti-virus and firewall software on their computers before being allowed to connect to the internet under a new plan to fight cyber crime. And if their computer did get infected, internet service providers like Telstra and Optus could cut off their connection until the problem was resolved,? reports News.com.au.

A 260-page report released by the House of Representatives Standing Committee on Communications outlines a plan to mandate Internet users to install government-approved software before their Internet connection can be activated.

Of course, the vast majority of Internet users already use anti-virus software, but by creating the precedent of having to conform to government mandates simply to get online, this opens the door to later requiring government permission to use the Internet at all, as well as a Chinese-style ID verification system which will prevent ?undesirables? from using the web.

It also makes it easier for the government to use the law to subsequently demand that a mandatory Internet filter also be installed as part of the software package that blocks websites deemed ?offensive? to the authorities.

Efforts to place restrictions on the internet are unfolding apace in Australia where the government is implementing a mandatory and wide-ranging Internet filter modeled on that of the Communist Chinese government.

Australian communication minister Stephen Conroy said the government would be the final arbiter on what sites would be blacklisted under ?refused classification.?

The official justification for the filter is to block child pornography, however, as the watchdog group Electronic Frontiers Australia has pointed out, the law will also allow the government to block any website it desires while the pornographers can relatively easily skirt around the filters.

Earlier this year, the Wikileaks website published a leaked secret list of sites slated to be blocked by Australia?s state-sponsored parental filter.

The filter will even block web-based games deemed unsuitable for anyone over the age of fifteen, according to the Australian government.

Senator Joe Lieberman on Sunday called for the United States to move towards a a Chinese-style system of Internet control. Under Lieberman?s 197-page Protecting Cyberspace as a National Asset Act (PDF), President Obama would be given a ?kill switch? to shut down parts of the Internet.

Constant fear mongering about cyber attacks is the cover for a global assault on Internet freedom by authorities. The web is being overtaken by independent media outlets which are now beginning to eclipse establishment news organs. This has enabled activists and the politically oppressed to expose government atrocities and cover-ups at lightning pace, something the system is keen to curtail.