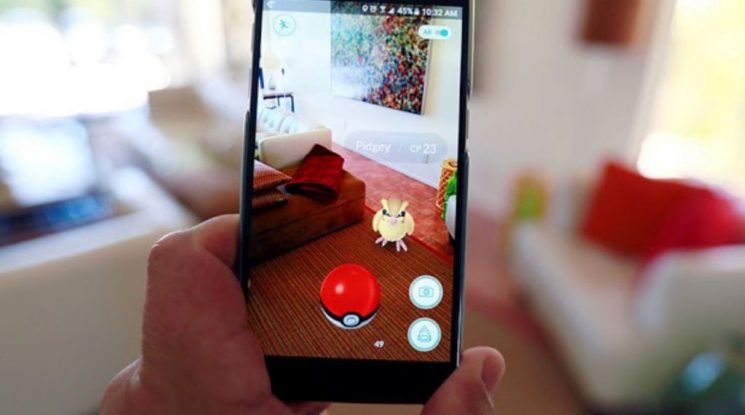 Some could have been excused for dismissing initial qualms surrounding the GPS-based augmented reality game, Pokemon Go. The game has swept the world, but its development is surrounded by disturbing connections between its developer Niantic, its former parent company Google, and the US State Department.

But while many before could only speculate as to the reason the US State Department may have been interested in developing such a game, it appears now there is at least a partial answer.

AFP would report in their article, “Pokemon Go a campaign weapon for presidential candidates,” that:

The global phenomenon Pokemon Go has made its way onto the US presidential campaign trail with the staff of both major candidates appealing to users of the smartphone game to catch voters.

Clinton staffers have since been cruising the streets looking for Pokemon hunters, hoping to divert their attention for the few minutes it takes to register to vote.

At a recent event in Ohio, the Democratic campaign encouraged players to come to its “lure module” — a feature that brings more Pokemon to a given location — to “get free Pokemon” and “learn more about Sec. Hillary Clinton!”

Quite literally then, the game is being used to lure people to physical locations through the promise of virtual payments. Once there they are subjected to political campaigning. One could imagine how this could be further expanded upon to manipulate people to an even greater degree.

AFP would also report something perhaps a bit more curious – that former US Secretary of State Hillary Clinton alleged that she didn’t “know who created ’Pokemon Go.’”

Niantic is headed by John Hanke, a former employee of both Google and before that, the US State Department.

It was also revealed that at this time, former US State Department employee Jared Cohen, then employed by Google, approached Secretary of State Hillary Clinton with a proposal of how to use location-based application to assist in the overthrow of the Syrian government.

An interactive tool created by Google was designed to encourage Syrian rebels and help bring down the Assad regime, Hillary Clinton’s leaked emails have reportedly revealed.

By tracking and mapping defections within the Syrian leadership, it was reportedly designed to encourage more people to defect and ‘give confidence’ to the rebel opposition.

The article would continue:

In a July 2012 email to members of Clinton’s team, which the WikiLeaks release alleges was later forwarded to the Secretary of State herself, Cohen reportedly said: “My team is planning to launch a tool on Sunday that will publicly track and map the defections in Syria and which parts of the government they are coming from.”

Our logic behind this is that while many people are tracking the atrocities, nobody is visually representing and mapping the defections, which we believe are important in encouraging more to defect and giving confidence to the opposition.

For Hillary Clinton to claim not to know how this application was developed, under her tenure at the US State Department, indicates that she is either dishonest or ignorant – but either way – unfit for the presidency.

The degree to which technology is being used to reach into the personal lives of the general public and manipulate them toward the ends of special interests is becoming increasingly disturbing and pervasive. Worst of all, despite incremental admissions as to who created Pokemon Go and to what end, the general public appears inoculated from suspicion with readily dispensed catch phrases like “don’t be paranoid,” and “that’s just a conspiracy theory.”

While big-tech and big-government colluding together to manipulate global populations is most certainly a conspiracy, it is by no means a “theory.” It is now demonstrable fact reported on by AFP itself.

One should also wonder what is next for location-based applications wielded by combines of government tech-business interests. Could it be augmenting staged rallies with “extra” attendees searching for “free Pokemon” to help draw in larger segments of the population who are otherwise disinterested in politics, no less politics driven by special interests from abroad?

Clinton Campaigners Use Pokemon Go To Literally “Lure” Voters
http://endtimeinfo.com/2016/08/clinton-campaigners-use-pokemon-go-to-literally-lure-voters/
manipulationPokemonsurveillance
Previous ArticleJesus is coming… and he wants you to elect him as MP for BurnleyNext Article2016 Will End With Economic Instability And A Trump Presidency