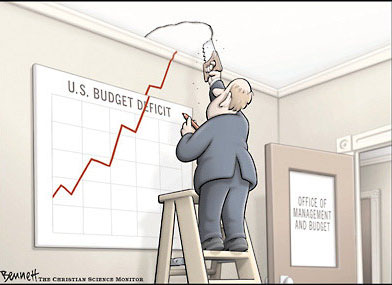 The financial collapse that so many of us have been anticipating is seemingly closer then ever.  Over the past several weeks, there have been a host of ominous signs for the U.S. economy.  Yields on U.S. Treasuries have moved up rapidly and Moody?s is publicly warning that it may have to cut the rating on U.S. government debt soon.  Mortgage rates are also moving up aggressively.  The euro and the U.S. dollar both look incredibly shaky.  Jobs continue to be shipped out of the United States at a blistering pace as our politicians stand by and do nothing.

Confidence in U.S. government debt around the globe continues to decline.  State and local governments that are drowning in debt across the United States are savagely cutting back on even essential social services and are coming up with increasingly ?creative? ways of getting more money out of all of us.  Meanwhile, tremor after tremor continues to strike the world financial system.  So does this mean that we have almost reached a tipping point?  Is the world on the verge of a major financial collapse?

Let?s hope not, but with each passing week the financial news just seems to get even worse.  Not only is U.S. government debt spinning wildly toward a breaking point, but many U.S. states (such as California) are in such horrific financial condition that they are beginning to resemble banana republics.

But it is not just the United States that is in trouble.  Nightmarish debt problems in Greece, Spain, Portugal, Ireland, Italy, Belgium and several other European nations threaten to crash the euro at any time.  In fact, many economists are now openly debating which will collapse first ? the euro or the U.S. dollar.

Sadly, this is the inevitable result of constructing a global financial system on debt.  All debt bubbles eventually collapse.  Currently we are living in the biggest debt bubble in the history of the world, and when this one bursts it is going to be a disaster of truly historic proportions.

So will we reach a tipping point soon?  Well, the following are 25 signs that the financial collapse is rapidly getting closer?.

#1 The official U.S. unemployment rate has not been beneath 9 percent since April 2009.

#2 According to the U.S. Census Bureau, there are currently 6.3 million vacant homes in the United States that are either for sale or for rent.

#3 It is being projected that the U.S. trade deficit with China could hit 270 billion dollars for the entire year of 2010.

#4 Back in 2000, 7.2 percent of blue collar workers were either unemployed or underemployed.  Today that figure is up to 19.5 percent.

#5 The Chinese government has accumulated approximately $2.65 trillion in total foreign exchange reserves.  They have drained this wealth from the economies of other nations (such as the United States) and instead of reinvesting all of it they are just sitting on much of it.  This is creating tremendous imbalances in the global economy.

#8 According to CoreLogic, U.S. housing prices have now declined for three months in a row.

#9 The average rate on a 30 year fixed rate mortgage soared 11 basis points just this past week.  As mortgage rates continue to push higher it is going to make it even more difficult for American families to afford homes.

#10 22.5 percent of all residential mortgages in the United States were in negative equity as of the end of the third quarter of 2010.

#11 The U.S. monetary base has more than doubled since the beginning of the most recent recession.

#12 U.S. Treasury yields have been rising steadily during the 4th quarter of 2010 and recently hit a six-month high.

#13 Incoming governor Jerry Brown is scrambling to find $29 billion more to cut from the California state budget.  The following quote from Brown about the desperate condition of California state finances is not going to do much to inspire confidence in California?s financial situation around the globe?. California Budget Is “Much Worse Than I Thought — We’ve Been Living In Fantasy Land?

#14 24.3 percent of the residents of El Centro, California are currently unemployed.

#15 The average home in Merced, California has declined in value by 63 percent over the past four years.

#16 Detroit Mayor Dave Bing has come up with a new way to save money.  He wants to cut 20 percent of Detroit off from essential social services such as road repairs, police patrols, functioning street lights and garbage collection.

#17 The second most dangerous city in the United States ? Camden, New Jersey ? is about to lay off about half its police in a desperate attempt to save money.

#18 In 2010, 55 percent of Americans between the ages of 60 and 64 were in the labor market.  Ten years ago, that number was just 47 percent.  More older Americans than ever find that they have to keep working just to survive.

#21 The U.S. government is somehow going to have to roll over existing debt and finance new debt that is equivalent to 27.8 percent of GDP in 2011.

#22 The United States had been the leading consumer of energy on the globe for about 100 years, but this past summer China took over the number one spot.

#23 According to an absolutely stunning new poll, 40 percent of all U.S. doctors plan to bail out of the profession over the next three years.

#25 All over the United States, local governments have begun instituting ?police response fees?.  For example, New York Mayor Michael Bloomberg has come up with a plan under which a fee of $365 would be charged if police are called to respond to an automobile accident where no injuries are involved.  If there are injuries as a result of the crash that is going to cost extra.