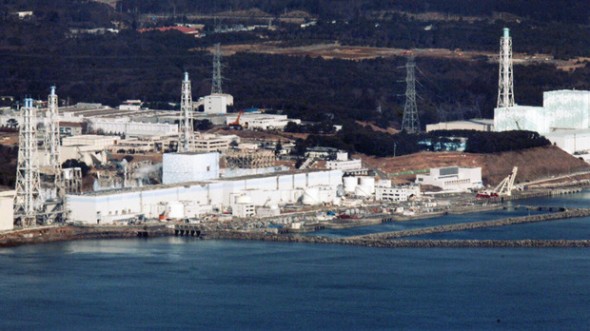 Hirose Takashi has written a whole shelf full of books, mostly on the nuclear power industry and the military-industrial complex.  Probably his best known book is Nuclear Power Plants for Tokyo in which he took the logic of the nuke promoters to its logical conclusion: if you are so sure that they’re safe, why not build them in the center of the city, instead of hundreds of miles away where you lose half the electricity in the wires?

He did the TV interview that is partly translated below somewhat against his present impulses.  I talked to him on the telephone today (March 22 , 2011) and he told me that while it made sense to oppose nuclear power back then, now that the disaster has begun he would just as soon remain silent, but the lies they are telling on the radio and TV are so gross that he cannot remain silent.

Yoh: Today many people saw water being sprayed on the reactors from the air and from the ground, but is this effective?

Hirose:  . . . If you want to cool a reactor down with water, you have to circulate the water inside and carry the heat away, otherwise it has no meaning. So the only solution is to reconnect the electricity.  Otherwise it?s like pouring water on lava.

Yoh: Reconnect the electricity ? that?s to restart the cooling system?

Hirose:  Yes.  The accident was caused by the fact that the tsunami flooded the emergency generators and carried away their fuel tanks.  If that isn?t fixed, there?s no way to recover from this accident.

Yoh: Tepco [Tokyo Electric Power Company, owner/operator of the nuclear plants] says they expect to bring in a high voltage line this evening.

Hirose: Yes, there?s a little bit of hope there.  But what?s worrisome is that a nuclear reactor is not like what the schematic pictures show (shows a graphic picture of a reactor, like those used on TV).  This is just a cartoon.  Here?s what it looks like underneath a reactor container (shows a photograph).  This is the butt end of the reactor.  Take a look.  It?s a forest of switch levers and wires and pipes.  On television these pseudo-scholars come on and give us simple explanations, but they know nothing, those college professors.  Only the engineers know.  This is where water has been poured in.  This maze of pipes is enough to make you dizzy.  Its structure is too wildly complex for us to understand. For a week now they have been pouring water through there.  And it?s salt water, right?  You pour salt water on a hot kiln and what do you think happens?  You get salt. The salt will get into all these valves and cause them to freeze.  They won?t move.  This will be happening everywhere.  So I can?t believe that it?s just a simple matter of you reconnecting the electricity and the water will begin to circulate.  I think any engineer with a little imagination can understand this.  You take a system as unbelievably complex as this and then actually dump water on it from a helicopter ? maybe they have some idea of how this could work, but I can?t understand it.

Hirose:  In principle, it can?t.  Because even when a reactor is in good shape, it requires constant control to keep the temperature down to where it is barely safe.  Now it?s a complete mess inside, and when I think of the 50 remaining operators, it brings tears to my eyes.  I assume they have been exposed to very large amounts of radiation, and that they have accepted that they face death by staying there.  And how long can they last?  I mean, physically.  That?s what the situation has come to now.  When I see these accounts on television, I want to tell them, ?If that?s what you say, then go there and do it yourself!?  Really, they talk this nonsense, trying to reassure everyone, trying to avoid panic.  What we need now is a proper panic.  Because the situation has come to the point where the danger is real.

If I were Prime Minister Kan, I would order them to do what the Soviet Union did when the Chernobyl reactor blew up, the sarcophagus solution, bury the whole thing under cement, put every cement company in Japan to work, and dump cement over it from the sky.  Because you have to assume the worst case.  Why?  Because in Fukushima there is the Daiichi Plant with six reactors and the Daini Plant with four for a total of ten reactors.  If even one of them develops the worst case, then the workers there must either evacuate the site or stay on and collapse.  So if, for example, one of the reactors at Daiichi goes down, the other five are only a matter of time.  We can?t know in what order they will go, but certainly all of them will go.  And if that happens, Daini isn?t so far away, so probably the reactors there will also go down.  Because I assume that workers will not be able to stay there.

I?m speaking of the worst case, but the probability is not low.  This is the danger that the world is watching.  Only in Japan is it being hidden.  As you know, of the six reactors at Daiichi, four are in a crisis state.  So even if at one everything goes well and water circulation is restored, the other three could still go down.  Four are in crisis, and for all four to be 100 per cent repaired, I hate to say it, but I am pessimistic.  If so, then to save the people, we have to think about some way to reduce the radiation leakage to the lowest level possible.  Not by spraying water from hoses, like sprinkling water on a desert.  We have to think of all six going down, and the possibility of that happening is not low.  Everyone knows how long it takes a typhoon to pass over Japan; it generally takes about a week.  That is, with a wind speed of two meters per second, it could take about five days for all of Japan to be covered with radiation.  We?re not talking about distances of 20 kilometers or 30 kilometers or 100 kilometers.  It means of course Tokyo, Osaka.  That?s how fast a radioactive cloud could spread. Of course it would depend on the weather; we can?t know in advance how the radiation would be distributed.  It would be nice if the wind would blow toward the sea, but it doesn?t always do that.  Two days ago, on the 15th, it was blowing toward Tokyo.  That?s how it is. . . .

Yoh: Every day the local government is measuring the radioactivity.  All the television stations are saying that while radiation is rising, it is still not high enough to be a danger to health. They compare it to a stomach x-ray, or if it goes up, to a CT scan.  What is the truth of the matter?

Hirose: For example, yesterday.  Around Fukushima Daiichi Station they measured 400 millisieverts ? that?s per hour.  With this measurement (Chief Cabinet Secretary) Edano admitted for the first time that there was a danger to health, but he didn?t explain what this means.  All of the information media are at fault here I think.  They are saying stupid things like, why, we are exposed to radiation all the time in our daily life, we get radiation from outer space.  But that?s one millisievert per year.  A year has 365 days, a day has 24 hours; multiply 365 by 24, you get 8760.  Multiply the 400 millisieverts by that, you get 3,500,000 the normal dose.  You call that safe?  And what media have reported this?  None.  They compare it to a CT scan, which is over in an instant; that has nothing to do with it.  The reason radioactivity can be measured is that radioactive material is escaping.  What is dangerous is when that material enters your body and irradiates it from inside.  These industry-mouthpiece scholars come on TV and what to they say?  They say as you move away the radiation is reduced in inverse ratio to the square of the distance.  I want to say the reverse.  Internal irradiation happens when radioactive material is ingested into the body.  What happens?  Say there is a nuclear particle one meter away from you. You breathe it in, it sticks inside your body; the distance between you and it is now at the micron level. One meter is 1000 millimeters, one micron is one thousandth of a millimeter.  That?s a thousand times a thousand: a thousand squared.  That?s the real meaning of ?inverse ratio of the square of the distance.?  Radiation exposure is increased by a factor of a trillion.  Inhaling even the tiniest particle, that?s the danger.

Yoh: So making comparisons with X-rays and CT scans has no meaning.  Because you can breathe in radioactive material.

Hirose: That?s right.  When it enters your body, there?s no telling where it will go.  The biggest danger is women, especially pregnant women, and little children.  Now they?re talking about iodine and cesium, but that?s only part of it, they?re not using the proper detection instruments.  What they call monitoring means only measuring the amount of radiation in the air.  Their instruments don?t eat.  What they measure has no connection with the amount of radioactive material. . . .

Hirose:  If you ask, are any radioactive rays from the Fukushima Nuclear Station here in this studio, the answer will be no.  But radioactive particles are carried here by the air.  When the core begins to melt down, elements inside like iodine turn to gas.  It rises to the top, so if there is any crevice it escapes outside.

Yoh: Is there any way to detect this?

Hirose: I was told by a newspaper reporter that now Tepco is not in shape even to do regular monitoring.  They just take an occasional measurement, and that becomes the basis of Edano?s statements.  You have to take constant measurements, but they are not able to do that.  And you need to investigate just what is escaping, and how much.  That requires very sophisticated measuring instruments.  You can?t do it just by keeping a monitoring post.  It?s no good just to measure the level of radiation in the air.  Whiz in by car, take a measurement, it?s high, it?s low ? that?s not the point.  We need to know what kind of radioactive materials are escaping, and where they are going ? they don?t have a system in place for doing that now.