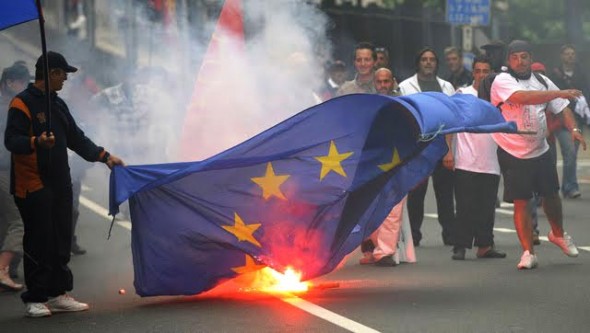 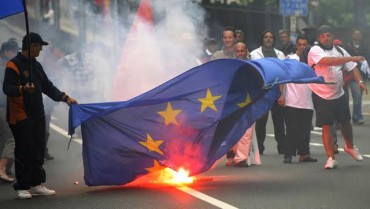 All over Europe, headlines are declaring that the eurozone is on the verge of collapse.  Many people falsely assume that this will mean the end of the euro and a return to national currencies.  Unfortunately, that is not going to be the case at all.  Instead, this is going to be yet another example of how the elite attempt to bring order out of chaos.  The European elite have no intention on giving up on a united Europe.  Rather, they hope to be able to bring to life a new “United States of Europe” out of the ashes of the existing eurozone.  Over the coming months we will see widespread panic and fear all across Europe.  The euro will likely sink like a rock and there will probably be huge financial problems in Europe and all around the globe.  But for the European elite, a great crisis like this represents a golden opportunity to tear down the existing structures and build new ones.  The solution that the European elite will be pushing will not be to go back to the way that Europe used to be.  Instead, they will be pushing the idea of a much more tightly integrated Europe really hard.

Of course it will not be called “the United States of Europe”, but that is definitely what they have in mind.

But they know that the people of Europe will never go for this solution unless they feel enough fear and pain first.

Right now, the stage is being set for the coming financial crisis in Europe.  All over the EU, media outlets are priming Europeans to expect the worst.  For example, the following comes from an article in the Telegraph….

The collapse of the eurozone would cause a crash that would instantly wipe out half of the value of Europe?s economy, plunging the continent into a depression as deep as the 1930s slump, the president of the European Commission has warned.

Some newspapers are even warning that a financial “armageddon” is coming.  Just check out the following excerpt from an article in the Express….

PREPARATIONS were under way last night for the break-up of the euro as Europe?s debt crisis spiralled out of control.

As Treasury officials worked through the night to soften the impact on Britain, David Cameron warned that the single European currency was facing its ?moment of truth?.

Business Secretary Vince Cable went further and spoke about ?Armageddon? while Brussels officials warned that the chaos threatened to plunge us all into a new recession.

If you can believe it, many among the European elite may actually be looking forward to the collapse of the current eurozone structure.

Well, it will give them the opportunity to implement something new.

A financial crisis is only temporary, but many among the European elite believe that they can build a “new Europe” which will last for ages.

News outlets all over Europe are already reporting on rumors that French President Nicolas Sarkozy and German Chancellor Angela Merkel have been “secretly plotting” to create a “new eurozone” that will exclude some of the weaker nations such as Greece and Italy.

For instance, the following is from an article that just came out  in the Telegraph….

France is drawing up plans to create a breakaway organisation of eurozone countries with its own treaty, parliament and headquarters ? a move that could significantly undermine the existing European Union.

That same article in the Telegraph is also already preparing readers to accept that the ultimate solution to the coming financial crisis will be to “strengthen the union between eurozone countries”….

France and Germany are understood to want to strengthen the union between eurozone countries with new taxes and legal measures to stop nations borrowing and spending too much in future.

But what is not being said in these articles is that Germany and France have no intention of leaving anyone out in the long run.  They just want some of the weaker countries to be afraid of being “left out” of the “new club” so that they will agree to a much more tightly integrated Europe and to all of the new rules that Germany and France plan to impose.

Mark my words.  Financially weaker countries such as Italy and Greece will eventually join the new “economic bloc” that Germany and France are setting up.

The cold, hard reality of the matter is that the current structure of the eurozone simply does not work and it should have never come into existence in the first place.  A recent article posted on Crackerjack Finance summarized some of the problems with the existing eurozone structure very nicely….

The problems of the Eurozone?s flawed construct are now completely exposed. A block of 17 sovereign nations have adopted a common currency and outsourced monetary policy to a common central bank. Yet each of the 17 sovereign nations have different comparative advantages, industries, debt levels, interest rates, budget deficits, labor market rules, and tax policies. Reflecting on all the differences, it is amazing that the Eurozone has survived in the current construct for over a decade.

But instead of going back to national currencies, the elite of Europe are convinced that it is time for a “United States of Europe” that will be much, much more tightly integrated.

An article in the Guardian recently quoted Angela Merkel as saying that the solution to the problems that Europe is facing is going to “mean more Europe, not less Europe”….

Angela Merkel, the German chancellor, said the situation had become “unpleasant”, and called for eurozone members to accelerate plans for closer political integration. “It is time for a breakthrough to a new Europe,” she said. “Because the world is changing so much, we must be prepared to answer the challenges. That will mean more Europe, not less Europe.”

European Commission President Jose Manuel Barroso has been even bolder in his calls for Europe to “unite”….

The president of the European commission, José Manuel Barroso, issued a new call for the EU to “unite or face irrelevance” in the face of the mounting economic crisis in Italy. “We are witnessing fundamental changes to the economic and geopolitical order that have convinced me that Europe needs to advance now together or risk fragmentation. Europe must either transform itself or it will decline. We are in a defining moment where we either unite or face irrelevance,” he said.

To facilitate this process, new politicians are being put into place all over Europe that will be sympathetic to the “united Europe” agenda of the European elite.

In Italy, Silvio Berlusconi is out, and it looks like he will be replaced by economist Mario Monti.

In Greece, George Papandreou is out, and Lucas Papademos has been put into power.

Papademos taught at Harvard, and he previously served as governor of the Greek central bank, as a vice president of the European Central Bank and as a senior economist at the Federal Reserve Bank of Boston.  He is also a member of the Trilateral Commission.

It is funny how people from these same elitist organizations always seem to pop up in positions of power, isn’t it?

With men like these in position, it will be much easier for the European elite to get the rest of the continent to make the transition to the “new Europe”.

But what will a “new Europe” look like?  Well, a Daily Mail article from a while back entitled “Rise of the Fourth Reich, how Germany is using the financial crisis to conquer Europe” contained the following sobering assessment of what much deeper economic integration for Europe would mean….

This would entail a loss of sovereignty not seen in those countries since many were under the jackboot of the Third Reich 70 years ago.

For be in no doubt what fiscal union means: it is one economic policy, one taxation system, one social security system, one debt, one economy, one finance minister. And all of the above would be German.

But that is what the elite always want.

Right now, the people of Europe are not ready to go along with the whole “new Europe” thing.

So that means that there is going to have to be a lot of chaos, pain and fear first.

A financial collapse is most definitely coming to Europe.

It is going to be tremendously unpleasant.

But after it is over, the European elite are hoping that they will finally have what they have always wanted – a “new Europe” that is more tightly integrated than it has been at any point since the fall of the Roman Empire.