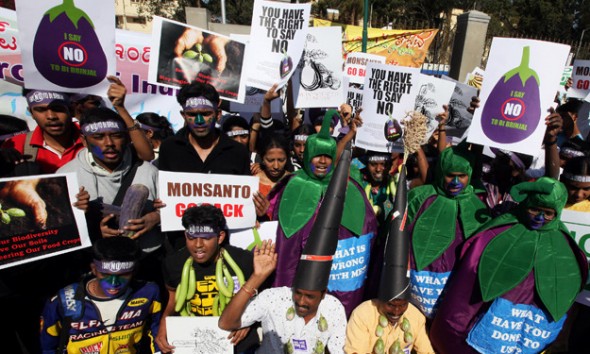 India has joined the conglomerate of nations directly opposed to the agricultural corruption brought upon by bloated biotechnology giant Monsanto, declaring legal action against the corporation for a crime dubbed ?biopiracy?.

The charges were brought against Monsanto for utilizing a local eggplant variety to develop their own genetically modified version including the notorious biopesticide Bt. Monsanto?s Bt GMO crops are known to threaten the environment in addition to human health, and India considers Monsanto?s unauthorized testing of the crops to be biopiracy.

India?s National Biodiversity Authority (NBA) made the unprecedented decision as detailed in their official statements on the subject, joining nations like Hungary and Peru in their efforts to control Monsanto?s presence within their borders.

Hungary was among the first to lead the charge, actually destroying more than 1,000 acres of Monsanto?s GM maize in direct defiance against the company. Peru also took a monumental stand against Monsanto, announcing a ten-year-ban on GMO crops and genetically modified ingredients.

Leaked Documents Show India May be Targeted for GMO Opposition

The ambassador plainly calls for ?target retaliation? against nations who are against using Monsanto?s genetically modified corn, despite research linking it to severe damage to your body. Therefore, the question must be asked as to whether or not the United States will attempt to ?penalize? India for taking such an unprecedented move against Monsanto. While that remains to be seen, it is clear that Monsanto is increasingly being resisted across the globe by nations and individuals alike.

India Slams Monsanto with Unprecedented ?Biopiracy? Charges
http://endtimeinfo.com/2012/01/india-slams-monsanto-with-biopiracy-charges/
bioengineeringgenetic modificationGMOMonsanto
Previous ArticleRussia: Attack on Tehran is Attack on MoscowNext ArticleSmart Pill With ‘Edible Microchip’ That Tells You And Your Doctor When The Next Dose Is Due