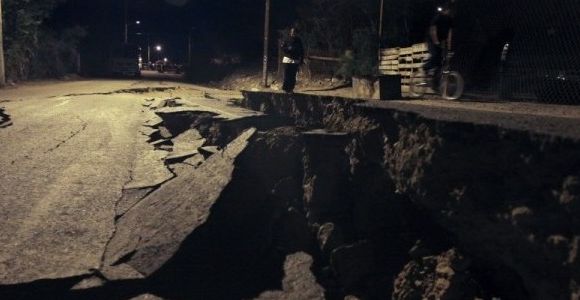 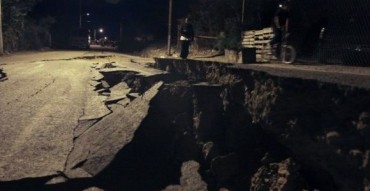 Fears amongst some that governments are experimenting with technology that can trigger seismic events have heightened following the bizarre occurrence of yesterday?s Mexican earthquake coinciding with a government drill that was scheduled to take place at precisely the same time simulating an earthquake of the exact same magnitude.

After having initially been reported as 7.9 on the Richter scale, the earthquake was later revised to measure 7.4. The exercise was being run under the auspices of Mexico?s State Emergency Committee, the government department tasked with responding to natural disasters. ?As part of preparations for the next megasimulacro March 20, state authorities of Civil Protection (CP) performed exercise tests before a cabinet to simulate the response to a contingency situation, an earthquake measuring 7.9 degrees on the scale Richter,? states a translated report out of Mexican newspaper El Heraldo, which ran the story on March 2. A poster to publicize this ?megasimularco? was also published by authorities, announcing the date of the drill to take place on March 20.

Another Mexican newspaper, La Voz del Norte, also reported on the ?megasimularco,? on March 13, noting that three departments of ?government are prepared to carry out the Mega Drill to be held on March 20 at about 12 o?clock.? Yesterday?s earthquake hit precisely at 12:02PM local time in the region of Oaxaca, according to the USGS. The bizarre coincidence has prompted claims that the event could have been a seismic experiment.

The fact that governments have access to seismic-triggering technology is not a conspiracy theory, it?s a scientific fact. Weather modification expert Ben Livingston, a former Navy Physicist who briefed President Lyndon B. Johnson on the effectiveness of weather control back in the 1960?s during the Vietnam era, has documented that as far back as the early 1950?s the United States was funneling money into programs aimed at using the weather as a weapon during the cold war. Moreover, in an April 1997 speech to the University of Georgia, Athens, then US Secretary of Defense William Cohen spoke of the threat of an ?eco-type of terrorism whereby they can alter the climate, set off earthquakes, volcanoes remotely through the use of electromagnetic waves.?

For many years, suspicions have circulated around the purpose of the High Frequency Active Auroral Research Program (HAARP), an ionospheric research program jointly funded by the US Air Force, the US Navy, the University of Alaska and DARPA. In his underground bestseller Angels Don?t Play This HAARP, author Nick Begich summarizes the evidence that suggests HAARP is involved in weather control for nefarious purposes. Scientists at NASA have discovered ?a close link between electrical disturbances on the edge of our atmosphere and impending quakes on the ground below,? which has led to claims that earthquakes are being artificially induced as a form of modern warfare by HAARP.

Human activity has also been confirmed as a source of earthquakes. Changes in underground pressure at a geothermal power plant in Switzerland caused a 3.4 earthquake in 2007.

Whether or not yesterday?s earthquake was a seismic experiment gone awry or not, the fact that it coincided precisely with a government drill based around the an identical scenario, even down to the exact same magnitude of the earthquake that was initially reported, is a bizarre occurrence.