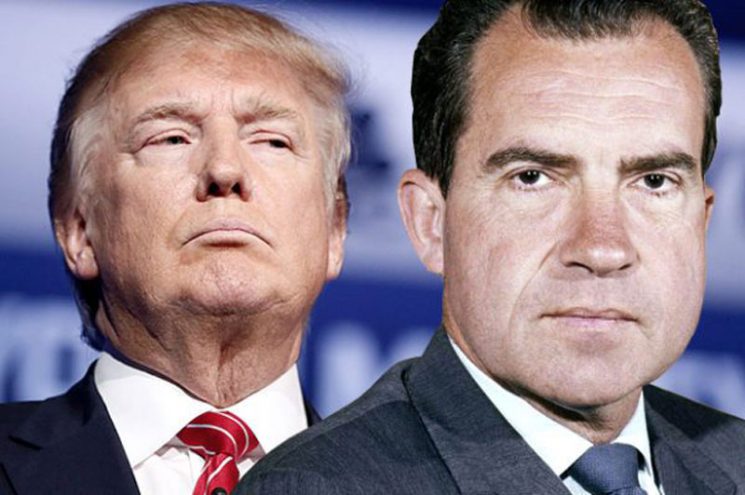 Watergate eventually became the story of two young rookie reporters who exposed and took down a president. Nixon.

Try to think of another major story in your lifetime where the reporters themselves took center stage, and in the process nearly eclipsed their own work. Odd.

One of them, Bob Woodward, expanded his fame. The powers-that-be permitted him to go on and, with extraordinary access, write books criticizing future presidents. Woodward became the in-house attack dog. Mr. Limited Hangout.

The other reporter, Carl Bernstein, faded into relative obscurity. Well, after all, he began exposing many journalists’ connections to the CIA. That wasn’t a productive career move. It was, perhaps, a case of him biting the CIA hand that, without his knowledge, had fed him during his Watergate investigation.

What Woodward and Bernstein didn’t know, during Watergate, was this: On the mega-corporate front, the Rockefeller proposal for world control—“free trade, no tariffs”—was advancing toward fruition, and Richard Nixon was standing in the way.

In an effort to bolster US companies and protect them from foreign competition inside the United States, Nixon began erecting tariffs on a range of goods imported into the US.

If this Nixon economic plan spread to other countries, the entire global program to install “free trade” and mega-corporate emperors on their thrones for a thousand years could crash and burn.

Nixon was a Rockefeller man. He was owned by them. He’d been rescued from financial ruin by The Family, and now he was in the White House undermining their greatest dream. You can’t overstate the degree of the betrayal, from the Rockefeller point of view. You simply can’t.

Something had to be done. The president had to go. This was the real motivation behind Watergate. This was the real op. Yes, there were sub-motives and smaller contexts, as in any major op, but the prime mover was: get Free Trade back on track, and get suitable revenge on the puppet in the White House who went off the script.

Any historian who overlooks this is an outright fool or a deceiver.

Whether the Watergate break-in was planned to serve the higher goal or was pounced upon, after the fact, as the grand opportunity, is beside the point. It was there, and it was used. It became the starting point for the Washington Post, its publisher, veteran editor, and two cub reporters to break Richard Nixon into pieces.

And if the Rockefeller people needed an inside man at the White House to report on the deteriorating mental state of the president as he heated up in the pressure cooker, they had Henry Kissinger, who was another Rockefeller operative.

The Washington Post was owned by Katharine Graham, who was herself a very close friend of the Rockefeller Family. Years later, she would be awarded a medal of honor by the University of Chicago, an institution founded by John D. Rockefeller. On her death, a paid heartfelt obituary was inserted in the NY Times by the trustees, faculty, and staff of Rockefeller University, where she had served on the University Council.

And she and Nixon already hated each other by the early 1970s.

The managing editor of the Washington Post, Ben Bradlee, was an old hand at writing promotional material, having worked in Europe crafting releases for a CIA front group. A former Naval intelligence man, he liked one of his cub reporters, Bob Woodward, who had also worked for the Navy in intelligence.

When Woodward came to Bradlee with a story about a man in a parking garage who was passing secrets from the White House/FBI about Watergate, we are supposed to believe that Bradlee naturally responded by giving the green light to a major investigation. Woodward and Carl Bernstein, another cub, would undertake it—with nothing more than Bradlee’s reputation and the future survival of the Post and Katharine Graham’s empire on the line if the cubs got it wrong.

Bradlee, a grizzled veteran of Washington, understanding exactly what Washington could do to people who told secrets out of school, just said to Woodward and Bernstein, “You’d better be damned sure you’re right, because otherwise we’re all in trouble.”

The odds of that happening were nil. Bradlee had to know a great deal from the beginning, and he had to have Katharine Graham’s signal to move. The series of breaking stories would be spoon-fed to the unsuspecting young reporters. They would be consumed by their ambition to advance their careers. Bradlee was confident because he had the essentials of the scandal in hand—all the way up to Nixon, the target—well in advance of his two reporters.

To have proceeded otherwise—Bradlee was simply not that kind of fool. Whatever Deep Throat, the man in the garage, was dishing out to Woodward didn’t really matter. Bradlee already had it in his pocket. Deep Throat was merely a contrivance to allow the story to expand and grow by steps, and to permit Woodward and Bernstein to believe they were peeling layers from an onion.

The man behind the curtain was David Rockefeller.

After the whole scandal had been exposed and Nixon had flown away, in disgrace, from the White House for the last time, David Rockefeller addressed a meeting of the Chamber of Commerce of the European Community (October, 1975). He was there to allay their fears about Nixon’s betrayal of the new economic world order. There was really very little he needed to say. David had already created (1973) the free-trade Trilateral Commission, an exceedingly powerful force. And a new puppet, Gerald Ford was in the White House; and Ford had appointed David’s brother, Nelson Rockefeller, as his vice president.

David told the European attendees, “Fortunately, there are no signs that these anti-[free] trade measures [of Nixon] are supported by the [Ford] Administration.”

And that was that. The global mega-corporate colossus was back on track.

The temporary rip in the Matrix had been repaired.

On a far lower level of power politics, everyone and his brother were consumed with the contrails of the scandal that had driven away Nixon and his colleagues. People were congratulating each other on the expunging of a corrupt conspiracy from public life. 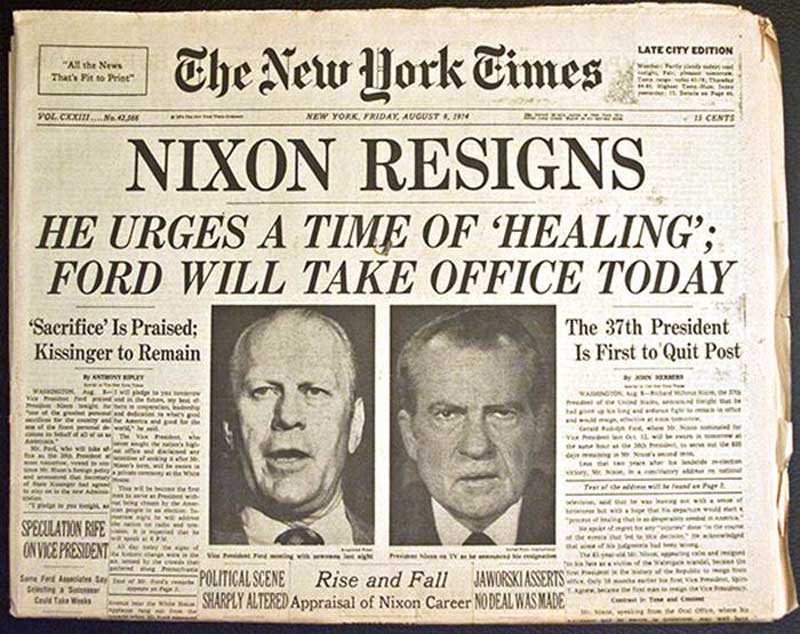 The real players, of course, were still in place, stronger than ever. David Rockefeller and his aides were preparing for an even greater coup. They had chosen an obscure man with zero name recognition to be the next president of the United States. Jimmy Carter. Carter would function to forward the goals of the Trilateral Commission in bold view of anyone who knew the score.

And every president since Carter, regardless of party affiliation, has supported and extended those Globalist-corporate goals. No questions asked. Obama, who fatuously remarked during his 2008 election campaign that NAFTA “needs to be revisited,” has taken his cues like any other puppet.

When, from this perspective, you examine the global takeover of land and resources by GMO agribusiness, the destruction of small family farms, the plundering of natural resources in the Third World, the use of UN “peacekeepers” and “humanitarian groups” and intelligence agencies to create a wedge, for corporations, into these areas, you see the hand of the Rockefeller plan.

When you see the destruction of currencies and the escalation of insupportable debt, the incursion of a bewildering number of UN-affiliated groups sinking their teeth into local communities all over the planet to “manage sustainable development,” you see the plan.

And when you see “free trade” and no tariffs, you see the essentials nuts and bolts of the plan.

The innocuous -sounding “free trade” policy is the number-one priority of every American president. He must do two things: rarely speak of it, and allow it to move forward. That’s all. In return, he gets to act as if he’s the most powerful man in the world.

But if he wobbles and considers taking up a position against free trade (corporate domination of the planet), he can look back and see what happened to Richard Nixon. He can learn from that example.

He can re-learn the famous words of Zbiggie Brzezinski, co-founder of the Trilateral Commission and David Rockefeller’s intellectual flunkey:

“The nation state as a fundamental unit of man’s organized life has ceased to be the principal creative force: International banks and multinational corporations are acting and planning in terms that are far in advance of the political concepts of the nation-state.”

Like Jimmy Carter, a president can espouse the most wide-ranging humanitarian philosophy and ascend to a cloud of beautiful altruism, admired by all. As long as he sticks to the plan.

If not, agents and reporters coming out of nowhere will try to demolish him.

—Suddenly, a swaggering, self-congratulatory, fast-talking cowboy named Donald Trump appeared as a presidential candidate. And lo and behold, he attacked Globalism by name. He claimed he would dump it in favor of American nationalism. He repeated this oath many times. And he won the election, unseating a lifelong Globalist named Hillary Clinton.

Whether Trump intends on keeping his promises and going up against the Rockefeller colossus, he has spoken of that which must not be uttered in public: the crimes of Globalism and free trade.

He has let the secret cat out of the bag. He has made people aware…

And for that, he must be punished.

What people are calling the Deep State is the collection of agents who are committed to the Rockefeller plan. They, and their media flunkeys, are swinging for the fences every time they mention Trump. They are doing everything they can to take him down.

***From their perspective, they are launching another Watergate-type operation against another Nixon in the White House.

—In order to protect the titanic, Globalist, corporate control of planet Earth.

This time, the rhetoric and the sentiment for nationalism and against Globalism has already spread across the world. It is percolating and boiling in many places.

Putting the lid back on is a herculean task. Therefore, the agents and reporters are doubling and tripling down on Trump. Even if he turns out to be no more than a symbol of anti-Globalism, they are determined to crush him.

They have their marching orders.

Mere blocks away from the Oval Office, the Community Organizer in Chief, after serving eight years in the White House, is now setting up a parallel presidency, with 30,000 ground-and-pound Leftist dupes at his disposal—all for the purpose of taking down Donald Trump.

You can bet Obama’s bosses have reminded him that he failed at his most important task: shepherding through the free-trade Trans-Pacific Partnership treaty. They intend to collect on their investment. They put him, a no-name, in charge of the nation, in 2008, and he is still their agent. They want results.

They want a 2017 version of Watergate.