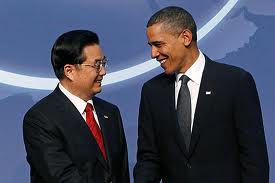 BEIJING?Chinese President Hu Jintao emphasized the need for cooperation with the U.S. in areas from new energy to space ahead of his visit to Washington this week, but he called the present U.S. dollar-dominated currency system a ?product of the past? and highlighted moves to turn the yuan into a global currency.

?We both stand to gain from a sound China-U.S. relationship, and lose from confrontation,? Mr. Hu said in written answers to questions from The Wall Street Journal and the Washington Post.

Mr. Hu acknowledged ?some differences and sensitive issues between us,? but his tone was generally compromising, and he avoided specific mention of some of the controversial issues that have dogged relations with the U.S. over the past year or so?including U.S. arms sales to Taiwan that led to a freeze in military relations between the world?s sole superpower and its rising Asian rival.

On the economic front, Mr. Hu played down one of the main U.S. arguments for why China should appreciate its currency?that it will help China tame inflation. That is likely to disappoint Washington, which accuses China of unfairly boosting its exports by undervaluing the yuan, making its products cheaper overseas. The topic is expected to be high on U.S. President Barack Obama’s agenda when he meets Mr. Hu at the White House on Wednesday.

Mr. Hu also offered a veiled criticism of efforts by the U.S. Federal Reserve to stimulate growth through huge bond purchases to keep down long-term interest rates, a strategy that China has loudly complained about in the past as fueling inflation in emerging economies, including its own. He said that U.S. monetary policy “has a major impact on global liquidity and capital flows and therefore, the liquidity of the U.S. dollar should be kept at a reasonable and stable level.”

Mr. Hu’s responses reflect a China that has grown more confident in recent years?especially in the wake of the global financial crisis, from which it emerged relatively unscathed.

Mr. Hu’s veiled criticism of the Fed reflects widespread feelings among developing nations that U.S. interest-rate policy is devaluing the dollar, prompting flows of capital overseas and creating inflation elsewhere. China and other developing countries would like the Fed to factor in those consequences when it makes decisions. Fed officials counter that their mandate is to bolster the U.S. economy and that a stronger U.S. economy is in the interests of China and other countries, which depend heavily on trade and investment from the U.S.

This could be a major issue of contention between Messrs. Hu and Obama. The U.S. blames Chinese currency undervaluation?not Fed policy making?for worsening competitive and inflation problems overseas.

Some of Mr. Hu’s most significant comments dealt with the future of the dollar and currency exchange rates.

“The current international currency system is the product of the past,” he said, noting the primacy of the U.S. dollar as a reserve currency and its use in international trade and investment.

The comment is the latest sign that the dollar’s future continues to concern the most senior levels of the Chinese government. Beijing fears not only that loose U.S. monetary policy is fueling inflation, but that it will erode the value of China’s holdings of dollars within its vast foreign-exchange reserves, which reached $2.85 trillion at the end of 2010.

China’s central bank governor, Zhou Xiaochuan, created an international stir in March 2009 by calling for the creation of a new synthetic reserve currency as an alternative to the dollar. Mr. Hu’s comments add to the sense that China intends to challenge the post-World War II financial order largely created by the U.S. and dominated by the dollar.

Mr. Hu called attention to China’s accelerating effort to expand the role of its own currency, describing recent moves to allow greater use of the yuan in cross-border trade and investment?while acknowledging that making it a fully fledged international currency “will be a fairly long process.”

China’s moves already have spawned a thriving market for offshore trading of yuan in Hong Kong, and are widely seen as first steps toward making the yuan an international currency in line with China’s new prominence as the world’s second largest economy. Mr. Hu offered an enthusiastic endorsement of what are officially described as currency “pilot programs.” They “fit in well with market demand as evidenced by the rapidly expanding scale of these transactions,” he said.

Mr. Hu didn’t signal any changes on the most sensitive aspect of China’s currency policy: the exchange rate.

Last week, U.S. Treasury Secretary Timothy Geithner reiterated the U.S. position that a stronger yuan is in China’s own best interests, because it would help tame rising inflation that has become a key risk to China’s rapid growth, which is underpinning the global economic recovery. A stronger yuan would reduce the price of imports in local-currency terms.

But Mr. Hu shrugged off the U.S. argument, saying that China is fighting inflation with a whole package of policies, including interest-rate increases, and “inflation can hardly be the main factor in determining the exchange rate policy.”

Further, Mr. Hu suggested that inflation was not a big worry, saying prices were “on the whole moderate and controllable.” He added: “We have the confidence, conditions and ability to stabilize the overall price level.”

While the U.S. says some Chinese economic officials buy that argument, it hasn’t been widely adopted within China, as Mr. Hu’s comments illustrate. But the U.S. feels that economics and time are on its side. Even so, the administration and Congress will continue to press China to boost the pace of its currency appreciation.

Mr. Hu renewed a Chinese pledge to offer a level playing field in China for U.S. companies, which have complained about aggressive Chinese moves to usurp their technology and shut them out of massive government-procurement contracts.

“All foreign companies registered in China are Chinese enterprises,” Mr. Hu said, responding to concerns that China discriminates in government procurement against foreign businesses as part of its drive to encourage so-called indigenous innovation.

He added: “Their innovation, production and business operations in China enjoy the same treatment as Chinese enterprises.”

The U.S. has been pressing China to revamp its plans for indigenous innovation, which foreign companies say put them at a disadvantage in competition with China’s state-owned firms, which limits the types of government development projects and requires that companies get government approval to participate. China has pledged to join the World Trade Organization’s government procurement agreement, which limits a country’s ability to discriminate. But the U.S. and other countries say that so far China’s WTO offer is inadequate because it exempts provinces, municipalities and state-owned enterprises. Last month China pledged to amend a buy-Chinese provision. During the Hu visit, the U.S. hopes to see some other commitments on this front from China.

Mr. Hu began his answers with a relatively upbeat assessment of China-U.S. relations, which he said had “on the whole enjoyed steady growth” since the start of this century.

He spoke of expanding cooperation from economy and trade into new areas like energy, infrastructure development and aviation and space. “We should abandon the zero-sum Cold War mentality,” he said, and “respect each other’s choice of development path.”

On the diplomatic front, Mr. Hu entirely glossed over what has been one of the most dramatic developments of the past year?a series of disputes between a more assertive China and its neighbors that has given the U.S. an opening to shore up its relations with a part of the world that felt neglected by Washington while it fought wars in Iraq and Afghanistan.

In the past year, China has feuded with Japan over the seizure of a Chinese fishing boat and its crew off disputed islands; opened deep differences with South Korea because of its subdued response to military provocations by North Korea; and alarmed countries in Southeast Asia by declaring the South China Sea and its energy and mineral riches one of its “core interests.”

“Mutual trust between China and other countries in this region has deepened in our common response to tough challenges, and our cooperation has continuously expanded in our pursuit of mutual benefit and win-win outcomes,” Mr. Hu said, ignoring the regional turmoil.