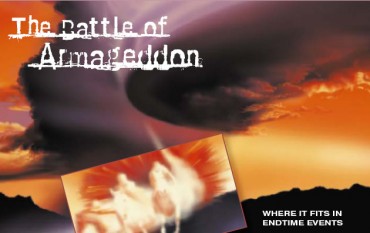 According to the Bible, the struggle between the forces of good and evil will climax in a cataclysmic battle known as Armageddon. The word “Armageddon” comes from the Hebrew har megiddôn, “hill (or height) of Megiddo,” a reference to a site in northern Israel, east of Haifa. This mount overlooks the Valley of Jezreel and the Plain of Esdraelon.

Events leading up to the Battle of Armageddon will involve an empire headed by a powerful Devil-possessed dictator known as the Antichrist, who will arise and take over much of the world (Daniel 8:23-25; 11:21-24). After the first three and a half years of the Antichrist’s seven-year reign, he will declare himself God and demand that the whole world worship him (2 Thessalonians 2:3-4). The Antichrist’s chief minister, referred to in the Bible’s book of Revelation as the “False Prophet,” will erect an image of the Antichrist, an image referred to as the “abomination of desolation,” which will “both speak and cause as many as would not worship the image of the beast to be killed” (Revelation 13:15). The False Prophet will also enforce the “mark of the Beast” economic system, under which no one will be able to buy or sell unless they receive a personalized mark in their forehead or right hand (Revelation 13:16-17).

This will bring on three and a half years of “great tribulation, such as has not been since the beginning of the world until this time, no, nor ever shall be” (Matthew 24:15-21). Nevertheless, some nations will rebel and war against the Antichrist government, refusing to bow down to its satanic leader or receive his mark (Daniel 11:40-44).

Immediately after this last three and a half years, Jesus Christ will return “in the clouds of Heaven with power and great glory” (Matthew 24:29-31) to rescue and resurrect all of those who love Him! His people will then rise from the earth in powerful, immortal resurrection bodies and join Jesus in Heaven for a great victory celebration, the “marriage supper of the Lamb” (1 Corinthians 15:51-52; 1 Thessalonians 4:16-17; Revelation 19:7-9).

Meanwhile, the wicked forces of the Antichrist will suffer hell on earth as God pours out His judgments on those who cruelly persecuted His people and brought such destruction to others (Revelation 16:1-11). But even after suffering God’s judgments, the wicked of the world will refuse to repent or turn to God, but rather curse Him all the more (Revelation 16:8-11).

The armies of the Antichrist will gather in the Valley of Jezreel, around the height of Megiddo, Armageddon, to war against the armies of the nations that oppose him (Revelation 16:12-16). The course of the battle will run from Megiddo to the very gates of Jerusalem (Joel 3:10-14; Zechariah 14:1-5).

At this time the Lord and all His resurrected saints from all the ages will come flying down on powerful heavenly white horses to destroy the Antichrist forces and rescue the opposing armies (Revelation 19:11-21; Zechariah 14:1-5; Ezekiel 39:17-22). So horrible will be the carnage that it will take seven months to bury the dead in Israel alone, and seven years to remove all the wreckage of the battle (Ezekiel 39:9-16).

The Antichrist and the False Prophet will be captured and taken from the Battle of Armageddon and tossed directly into the lake of fire–Hell (Revelation 19:20; Daniel 7:11). Satan, who possessed the Antichrist, will be imprisoned in the “bottomless pit” for 1,000 years (Revelation 20:1-3).

The Lord and His resurrected saints, His saved people of all ages, will then work together with those on earth who survived the Battle of Armageddon to rebuild a new and better world, setting up the kingdom of God on earth (Daniel 7:18,27; Revelation 2:26; 20:4,6). Only then, under the supreme rule and reign of Christ, will all wars finally cease and the world at last be governed fairly and well with true justice, liberty, peace, plenty, and happiness for all. Jesus “shall judge between the nations, and rebuke many people; they shall beat their swords into plowshares, and their spears into pruning hooks; nation shall not lift up sword against nation, neither shall they learn war anymore” (Isaiah 2:4). Complete disarmament at last!

This period will last for 1,000 years and is therefore known as the Millennium. The curse that came upon the earth when man fell into sin will be removed, and the earth will be restored to its original Garden of Eden state. “The lion will lie down with the lamb and the leopard with the baby goat, and a little child shall lead them” (Isaiah 11:6-7).

Are you ready for these coming events? If not, you can get ready now by receiving Jesus into your heart and studying His Word.