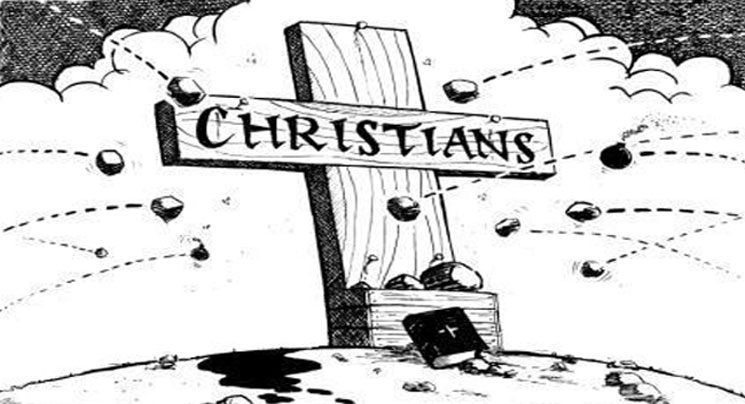 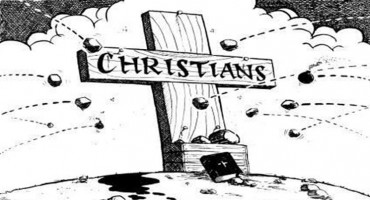 In some recent end time articles I?ve been describing some of the basic signs of the times that Jesus spoke about in Matthew Chapter 24 & Luke Chapter 21. Another sign Jesus spoke of was that Christians would also go through persecution. Although it?s not always a pleasant topic, nevertheless it is an end time topic to be aware of now & in the future. To be forewarned is to be forearmed spiritually & prepare for these end time events.

Now we know that during the coming Great Tribulation 3-1/2 year time period that the Antichrist   will make war against the Saints as described in Revelation 13:5-7:

And he opened his mouth in blasphemy against God, to blaspheme his name, and his tabernacle, and them that dwell in heaven.

And it was given unto him to make war with the saints, and to overcome them: and power was given him over all kindreds, and tongues, and nations.”

Persecution during the Great Tribulation is also mentioned in the Book of Daniel in the Old Testament in various scriptures like Daniel 7: 21, 25, Daniel 8:24-25; Daniel 12:7.

The Reign of the Antichrist and the Coming Great Tribulation

In Daniel 9:27 the Antichrist   confirms the 7 year Covenant with many & this starts the last 7 years before Jesus second coming & the Resurrection & Rapture.

This covenant is mentioned several other times in the Scriptures. Because it is called a ?holy covenant? in Daniel 11:28,30, it appears to be some sort of religious pact, at least in part ? quite possibly one that tackles the thorny issue of religious coexistence between Jews, Muslims, and Christians, and by which Jerusalem will be declared an international city with free and equal access guaranteed to people of all faiths. It appears that this will also clear the way for the Jews to finally be able to rebuild their Third Temple on Jerusalem?s Mount Moriah and reinstitute animal sacrifices on its altar.

?Daily sacrifice? refers to the ritual of Jewish faith in which the blood or flesh of a specified animal is offered in the Temple to God as a substitute payment for sin. This primary ritual of the Jewish faith was suspended when the second Temple was destroyed by the Romans in 70 A.D.

Daniel Chapter 9:27 goes on to say that the Antichrist   will break the covenant in the middle of the 7 years:

“And he (Antichrist) shall confirm the covenant with many for seven years: and in the midst of the seven years he shall cause the sacrifice and the oblation to cease.”

Daniel 11:31 is another key scripture:

“And arms shall stand on his (Antichrist) part, and they shall pollute the sanctuary of strength, and shall take away the daily sacrifice, and they shall place the abomination that maketh desolate.”

It tells us that at this point, three and a half years after confirming the seven-year covenant, the Antichrist will break the covenant and will forcibly enter the Jewish Temple (the ?sanctuary of strength?), which would have to have been built by then, as it does not exist now. He will put an end to the daily sacrifice and the False Prophet, the Antichrist?s chief aide, will place in the Temple area something called the ?abomination of desolation.? (Revelation 13:11-18)

Over 500 years after Daniel gave this prophecy, Jesus referred to it when He talked about the signs preceding His second coming and of the end of the age as we know it:

“When you see the ?abomination of desolation,? [possibly an Android with computer or artificial intelligence?] spoken of by Daniel the prophet, standing in the holy place [the Jewish Temple in Jerusalem] ? then there will be great tribulation, such as has not been since the beginning of the world until this time, no, nor ever shall be.” (Matthew 24:15,21).

This image, which the prophet Daniel referred to as the ?abomination of desolation,? will ?speak? and somehow have power to cause those who refuse to worship it to be killed (Revelation 13:14-15).

A new world cashless economic system will be set up in which nobody will be able to buy or sell without the 666 Mark of the Beast as described in Revelation 13:16-18:

“And he causeth all, both small and great, rich and poor, free and bond, to receive a mark in their right hand, or in their foreheads:

And that no man might buy or sell, save he that had the mark, or the name of the beast, or the number of his name.

Here is wisdom. Let him that hath understanding count the number of the beast: for it is the number of a man; and his number is Six hundred threescore and six.”

This could possibly be in the form of an RFID Chip implant, but at this point of course we?re not sure of the exact technology to be used.

Although this will be time of ?great trouble? God promises us that during this time, ?the people who know their God shall be strong, and carry out great exploits. And those of the people who understand shall instruct many? (Daniel 11:32-33). And God?s children and many others will refuse to worship the Antichrist or receive his mark, and the Lord will take care of them (Revelation 12:6,14).

So that makes it pretty clear that, yes, Christian Persecution is coming especially during the Great Tribulation time period. But what about now? Are persecutions against Christians happening today? And if, so how severe is it?

Jesus did say, “Then shall they deliver you up to be afflicted, and shall kill you: and ye shall be hated of all nations for my name’s sake.” (Matthew 24:9)

Approximately 100 million Christians are persecuted worldwide, making them one of the most persecuted religious groups in the world. While persecution can take many forms, Christians throughout the world risk imprisonment, torture, rape and even death as result of their faith.

“Even Christian-majority states are experiencing unprecedented levels of exclusion, discrimination and violence,? said David Curry, president and CEO of Open Doors USA. ?The 2015 World Watch List reveals that a staggering number of Christians are becoming victims of intolerance and violence because of their faith. They are being forced to be more secretive about their faith.”

Open Doors found that both violent and non-violent persecution is on the rise throughout the world.

Christian persecution is defined as any hostility experienced as a result of one?s identification with Christ. Recent examples include imprisonment, torture, beheadings, rape, and loss of home and assets.

Nearly twice the number of Christians was reported as dying for their faith in 2013 than the previous year, according to a new study by an organization monitoring global religious persecution. The World Watch List, issued by Open Doors USA each year, documents oppression of Christians throughout the world. Based on data from the past.

2014: The Year of Christian Genocide. The year 2014 saw more global persecution of Christians than any other year in recent history, and can only be compared to the first centuries when Christians were hunted down as criminals in the Roman Empire.

However even if there’s a terrible storm and great destruction all around you, you won?t need to fear! The Lord says, “Fear thou not, for I am with thee, be not dismayed, I am thy God!?You shall be safe in the midst of storm, in the hollow of My hand, for underneath you are My Everlasting Arms.? (Isaiah 41:10; Deuteronomy 33:27)”He is always there, He’ll never ever leave you, for He promises, “I am with you always, even to the End of the World!” (Matthew 28:20)

Signs of the Times: Persecution
http://endtimeinfo.com/2015/02/signs-of-the-times-persecution/
Christian persecutionpersecutionsigns of the times
Previous ArticleThe Best Preparation for the FutureNext ArticleMore on the Last Seven Years – Open or Secret Covenant?