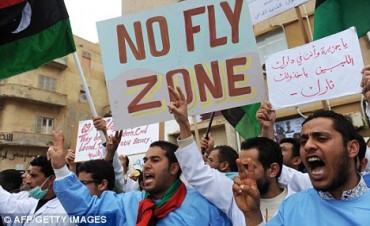 The U.N. Security Council on Thursday authorized “all necessary measures” including strikes by air and sea to protect civilians from attacks by Moammar Gadhafi’s forces.

The no-fly zone resolution passed 10-0 with five abstentions, including Russia and China, which have veto power, and Germany, India and Brazil.

It was unclear when the West would take action.

The resolution establishes ?a ban on all flights in the airspace of the Libyan Arab Jamahiriya” while excluding an occupation force. It also calls for freezing the assets of the Libyan National Oil Corp. and the central bank because of links to Gadhafi.

A British lawmaker said British forces could be mobilized as early as Thursday night. U.S. officials, speaking after a closed-door briefing in Congress, said they expected an attempt to ground Gadhafi’s air force could begin by Sunday or Monday and would probably involve jet fighters, bombers and surveillance aircraft.

Cameron called a cabinet meeting for Friday and will also make a statement to parliament on Libya, a spokeswoman said.

The U.N. resolution reflected the past week’s swift reversal of the situation in Libya, where once-confident rebels are now in danger of being obliterated by an overpowering pro-Gadhafi force using rockets, artillery, tanks, warplanes. That force has advanced along the Mediterranean coast aiming to recapture the rebel-held eastern half of Libya.

However, after the vote, Libyan Deputy Foreign Minister Khalid Kaim in Tripoli took a conciliatory tone, offering to negotiate a cease-fire with the rebels. He welcomed the Security Council’s endorsement of the territorial unity of Libya and concern for its citizens, but called on the world not to allow them to receive weapons because “if any countries do that, they will be inviting Libyans to kill each other.”

The world is “living one of its great revolutions that changes the course of history,” Juppe told the Security Council just before the vote.

Thousands of anti-Gadhafi protesters in Benghazi watched the U.N. proceeding on an outdoor TV projector and celebrated the vote by firing guns in the air, setting off fireworks and waving flags from the monarchy era in celebration, Al Jazeera TV showed.

Earlier, French Prime Minister Francois Fillon said on France-2 Television that “time is of the essence” and that France would support military action against Gadhafi within a matter of hours if the Security Council approves the resolution.

No ground operation
Military action could include France, Britain, possibly the United States and one or more Arab states, the French diplomatic sources said. The United States already has warships positioned near Libya.

The French official, speaking on condition of anonymity because he was not authorized to speak about the issue publicly, said France foresees a “coalition of the willing” that would include support from Arab states but would not involve a ground operation.

Arab countries’ support could come, for example, by providing use of their air bases, the official said.

German Foreign Minister Guido Westerwelle said his nation’s troops would not take part in Libyan military operations but he still believes Gadhafi must stop his war against his own people.

Support for the resolution marked a dramatic about-face by the Obama administration, which for weeks hesitated about supporting a no-fly zone, fearing that the United States could get sucked into another war in a Muslim nation.

Congressional officials Thursday said the Obama administration is readying plans to participate in a no-fly zone with the help of Arab countries including Jordan, Qatar and the United Arab Emirates.

The participant list was designed to demonstrate that the effort to aid anti-Gadhafi rebels had support from other countries in the region.

Warning from Libya
In an interview broadcast just before the Security Council voted, Gadhafi dismissed its actions. “The U.N. Security Council has no mandate. We don’t acknowledge their resolutions,” he told the Portuguese public Radiotelevisao Portuguesa. He pledged to respond harshly to U.N.-sponsored attacks. “If the world is crazy, we will be crazy too,” he said.

Earlier, Gadhafi told Benghazi residents in a radio speech, “We will come zenga, zenga. House by house, room by room.”

“We are coming tonight” and “there won’t be any mercy” for enemies.

Unarmed residents have nothing to fear, but every home will be searched, he said.

“Anyone who will throw away his weapon and stay home will get amnesty,” Gadhafi said. “Whoever has a weapon in his apartment is considered one of the enemy.”

Gadhafi spoke as his forces approached Benghazi and his warplanes bombarded the rebel stronghold’s airport, threatening an all-out offensive to bring down the rebellion.

“We will not be intimidated by these lies and claims,” Libyan National Council head Mustafa Abdel Jalil said, Al Jazeera television reported. “Libyan cities from Ajdabiyah and all of the east are under rebel control.”

Abdel Jalil said he would welcome any step that stopped “genocide,” including the U.N. resolution.

Libya warned of dire consequences for civilian and military targets and traffic in the Mediterranean Sea if any foreign nations attack.

Libya’s Defense Ministry said in a statement broadcast on state television that any foreign attack will endanger air and maritime traffic in the Mediterranean basin and expose the area to both short and long term risks.

The statement said Libya would strike back at civilian and foreign targets if the country comes under attack from foreign forces.

“Any foreign military act against Libya will expose all air and maritime traffic in the Mediterranean Sea to danger and civilian and military (facilities) will become targets of Libya’s counter-attack,” said the statement.

“The Mediterranean basin will face danger not just in the short-term, but also in the long-term,” it said.

Appeal for aid
The Libyan opposition has appealed for immediate assistance to prevent the rebel capital of Benghazi from falling to forces loyal to Gadhafi, and the question facing President Barack Obama and other world leaders was whether the action they planned to take would come in time.

UN Oks \'All Necessary Measures\' Against Libya
http://endtimeinfo.com/2011/03/un-oks-all-necessary-measures-against-libya/
demonstrationsLibyariotsuprisingwar
Previous ArticleIran Will Respond With ?All Power And Potentials At Its Disposal To Halt The Oppression Of The People Of Bahrain?Next ArticleEarthshaker – Updated