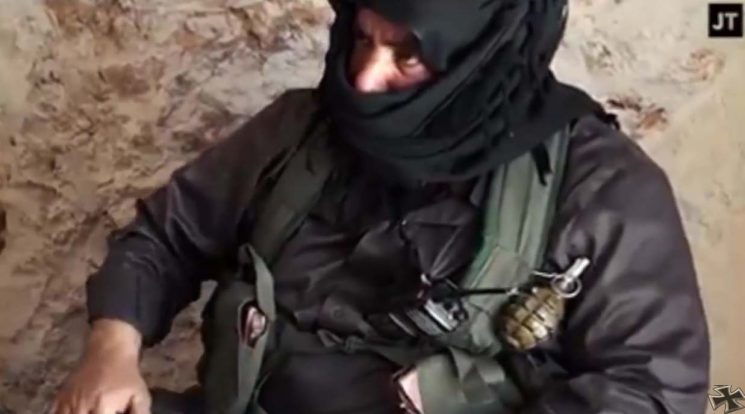 In a striking interview with German journalist Jürgen Todenhöfer published today the German press including the prominent newspaper Focus, a militant jihadist commander said that US weapons are being delivered to Jabhat Al-Nusra by governments that Washington supports, adding that American instructors were in Syria to teach how to use the new equipment.

“Yes, the US supports the opposition [in Syria], but not directly. They support the countries that support us. But we are not yet satisfied with this support,” Jabhat al-Nusra unit commander Abu Al Ezz said in an interview with Koelner Stadt-Anzeiger newspaper from the city of Aleppo. According to the commander, the militants should be receiving more “sophisticated weapons” from their backers to succeed against the Syrian government.

For those pressed for time, below is a summary of what the Al-Nusra commander said:

In the full interview, the commander notes that “The fight is difficult. The regime is strong and gets support from Russia,” the jihadist explained. Al Ezz said that Jabhat Al-Nusra “won battles thanks to TOW rockets. Due to these rockets, we reached a balance with the regime. Our tanks came from Libya via Turkey, joined by the [BM-21] multiple rocket launchers,” he said.

“We will fight until the regime is toppled,” he said, referring to Assad’s government. Al-Nusra Front wants “to establish an Islamic state that will be ruled according to the Sharia law. We do not recognize any secular state.”

The government forces have an advantage because of aircraft and missile launchers, but “we have the American-made TOW missiles, and the situation in some areas is under control,” Al Ezz added.

But the most stunning admission came when asked if the TOW missiles were initially intended for Jabhat Al-Nusra or if the group obtained them from the moderate Free Syrian Army, the jihadist clarified: “No, the missiles were given to us directly.”

He also said that when Jabhat Al-Nusra was “besieged, we had officers from Turkey, Qatar, Saudi Arabia, Israel and America here… Experts in the use of satellites, rockets, reconnaissance and thermal security cameras.”

Another dramatic admission: when Todenhöfer asked specifically if the US instructors were really present among the jihadists’ ranks and Al Ezz replied: “The Americans are on our side.”

He also said that Jabhat Al-Nusra has been paid for achieving specific military goals during the Syrian conflict. “We got 500 million Syrian pounds (around $2.3 million) from Saudi Arabia. To capture the Infantry School in Al Muslimiya years ago we received 1.5 million Kuwaiti dinars (around $500,000) and Saudi Arabia’s $5 million,” Al Ezz said.

The money came from the “governments” of those states, not private individuals, he said.

One of the governments cited as a source of funds – Israel. “Israel is now giving us support because Israel is at war with Syria and with Hezbollah,” Al Ezz said. The West also “paved the way” for jihadists coming to Syria, saying that “we have many fighters from Germany, France, Britain, America, from all the Western countries,” the commander said.

In the interview, Al Ezz confirmed claims made by Moscow and the Syrian government that the militants had used the Syrian ceasefire, agreed by Russia and US on September 9, to prepare for a new offensive.

“We do not recognize the ceasefire. We will regroup our groups. We will carry out the next overwhelming attack against the regime in a few days. We have regrouped our forces in all provinces, including Homs, Aleppo, Idlib and Hama,” Al Ezz said.

He said that Jabhat Al-Nusa would not let trucks with humanitarian aid enter Aleppo “as long as the regime [forces] are along the Castello Road, in Al Malah and in the northern regions.” “The regime must withdraw from all the territories, and we will let the trucks in. If a truck is going in anyway, we will detain the driver,” he said.

The idea of a transitional government in Syria is also not supported by Jabhat Al-Nusra, the commander said. “We accept no one from the Assad regime or of the Free Syrian Army, which is described as moderate. Our goal is to overthrow the regime, and establish an Islamic state in accordance with the Islamic Sharia,” he said.

As for the people who represent the Syrian opposition at the Geneva talks, Al Ezz said that “these people are weak, they’ve got a lot of money. They’ve sold themselves.”

“There are mercenaries in Syria, Alloush fights with Al Nusra-Front,” he said talking about Mohammed Alloush, a leader in the Jaysh al-Islam group, part of the Syrian opposition’s High Negotiations Committee (HNC) in the peace talks. “The group that was housed in Turkey and which was turned into the Free Syrian Army, used to be part of Al Nusra-Front.”

Interestingly, the al-Nusra Front commander also mentioned the UN aid convoy. Keep in mind that Todenhöfer, the first Western journalist to be granted access to the caliphate, conducted the interview ten day ago, before the attack. The commander said that the militants would not allow UN trucks carrying aid to enter Aleppo if the Syrian Arab Army does not withdraw “as required.” “The regime must withdraw from all areas in order for us to let the trucks in. If a truck drives in anyway, we will arrest the driver,” he detailed.

Finally, in case there is still any confusion, the commander openly confirmed that Jabhat Al-Nusra “are part of Al Qaeda.”

“Actually, we were inside one group together with the Islamic State. But the Islamic State has been used in accordance with the interests and political purposes of the big powers like America, and the group has drifted away from our principles. Most of the IS leaders are working with intelligence services, and it’s now clear for us. We, the Jabhat Al-Nusra, have our own way,” Al Ezz said.

The interview with Jabhat al-Nusra’s commander was taken at a stone quarry in Aleppo on September 17 by Koelner Stadt-Anzeiger journalist Jurgen Todenhöfer on his seventh trip to war-torn Syria.