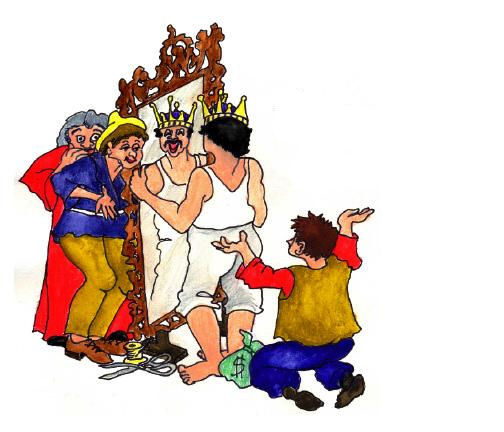 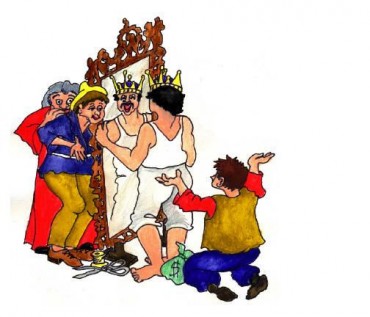 The trigger that apparently caused the market meltdown was the ever-so-slight suggestion from Standard & Poor’s that the US government’s fiscal health might not be all that it is cracked up to be.

This was not a case of the little boy noting the emperor has no clothes. It is more like the little boy suggested that the emperor’s clothes, while beautiful, might have been more carefully tailored to suit the imperial dignity. Hysteria followed, and the entire Obama cult called for the kid to be stoned.

Finally the emperor himself spoke in defense of his rainment. That’s when the market crashed.

But the downgrading of a government’s debt from AAA to AA+ can only have triggered a market avalanche if the truth is in fact much worse, and most everyone knows it.

S&P doesn’t have clean hands, of course. It holds a government monopoly, wants higher taxes, and rated crazed housing bonds AAA. But imagine, for just a moment, that US government debt were rated in the same way that municipal bonds or regular corporate debt are. Imagine that government bonds, like normal bonds, carried a default premium. Imagine, in other words, that the Federal Reserve were not in a position to pay everyone from welfare recipients to banksters with newly created money.

Under such actual market conditions, federal debt would not be rated as AA+. It would be worth even less than junk bonds. In fact, it wouldn’t even qualify for a market rating at all, because it would be utterly worthless and the institution that issued it would be in default and the whole rotten apparatus of the state would be seen to be bankrupt at its very core, in every sense.

We know this for one simple reason: There is no way that the government can fund its debt on taxes alone. There would be a revolution in this country in a heartbeat, and, probably, the entire American empire, domestic and foreign, would come crashing down, along with its banking and monetary systems.

If this actually happened, there would be no more “ongoing negotiations” about the budget and the debt. The cuts would be swift, extreme, gigantic. The federal government would have to behave like state governments, balancing the budget year to year. There would be no more plans for fake cuts in the planned increases, gradually phased in over ten years. The federal government would face actual market discipline. The S&P downgrade is only a slight taste of what would follow.

And let’s not just look at the downside. Hundreds of billions in resources would be freed from government control. The private sector would experience a huge infusion of energy. Interest rates would probably go through the roof, which means that people would actually be rewarded for saving, and saving is exactly what people would do as hundreds of banks went belly-up, large portions of the business sector had their credit lines cut, and merchants of death had to close their bloody doors.

There would be wailing and gnashing of teeth, but there would be no turning back. Within a few months, we would start seeing massive resource shifts and pockets of growth would return. New jobs would be available. New businesses would spring up. New financial firms would displace the old ones. Within a year or 18 months, we would be on a growth path, and this time it would be real and sustainable.

Of course this is not going to happen. Instead, the powers-that-be will continue their long game of “let’s pretend” as the economy sinks deeper and deeper, incomes fall, and the US gradually heads toward 3rd-world basket case status.

It’s not only the government that is bankrupt, of course. It’s the entire ideological apparatus that backs the state and its eternal expansion. The New York Times struggled for something to say about the obvious failure of the second stimulus. All they could come up with was: “shift every available resource toward jobs,” “increased investment in infrastructure,” more relief for homeowners, and another extension of unemployment benefits.

The only thing that this asinine editorial left out was the need to lower interest rates. And that’s because interest rates are already 0%, which has killed saving, terminated growth, and denied the public the fundamental freedom to sock away money in time deposits and let it earn something in exchange. The Federal Reserve is completely out of policy options, unless it is ready to embrace the Zimbabwe-Weimar solution.

Of course, the whole theory that the government can stimulate through control and robbery is wrong and counterproductive. It only ends up rewarding government and its friends while the rest of us suffer. If we ever get out of this depression, it will be because government is forced to stop this nonsense, and the economy really stimulated by taking a meat axe to the planning-spending-inflating apparatus.

But don’t take my word for it. Let S&P and many more competitive rating agencies go to town on US bonds and rate them as they would any bond in the private sector or even the public sector not backed by a printing press. Let reality speak, and let us listen.