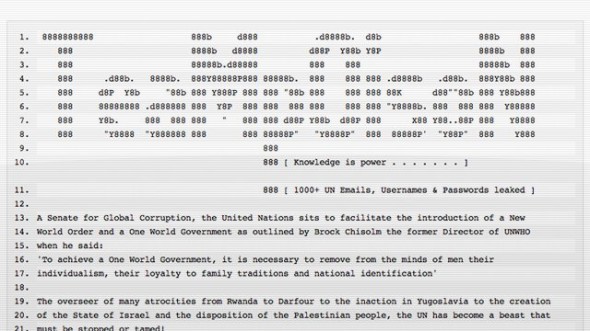 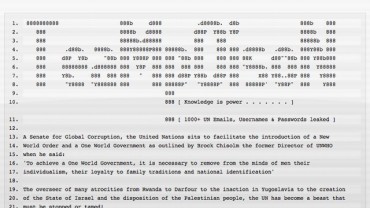 A group of anti-world government hacker activists or ?hacktivists? under the banner of ?TeamPoison? hacked the United Nations Development Program (UNDP), releasing hundreds of passwords belonging to the organization?s bureaucrats. The release also included a message blasting the global body and its affiliates for corruption, fraud, and atrocities, along with a warning of more attacks to come.

UN officials tried to downplay the breach, saying all of the information was several years old. But TeamPoison and security experts said that was not the case ? much of the data is current, and compromising the UN?s cyber security was a serious job.

In a statement posted online along with the stolen usernames and passwords, the hacker team criticized the global organization on several fronts. ?A Senate for Global Corruption, the United Nations sits to facilitate the introduction of a New World Order and a One World Government,? the group said.

Also included was a statement attributed to psychiatrist Brock Chisholm, the first director of the UN World Health Organization. ?To achieve a One World Government, it is necessary to remove from the minds of men their individualism, their loyalty to family traditions and national identification,? Chisholm was quoted as saying.

Among the many grievances against the UN cited by the hacker gang was the international body?s supposed oversight of, or responsibility for, atrocities from Rwanda and Darfur to Yugoslavia and Israel. Advocacy of population reduction was also disparaged in the post.

?The UN has become a beast that must be stopped or tamed!? the group said, citing Thomas Jefferson?s call for peace, commerce, and honest friendship with all nations. ?The UN is a fraud! The bureaucratic head of NATO used to legitimize the Barbarism of Capitalist elite!?

In addition to login information of UNEP bureaucrats, TeamPoison also published account details from the Organization for Economic Co-Operation and Development (OECD), the World Health Organization (WHO), and other international bureaucracies. It remains unclear how much data, if any, was obtained prior to the UN taking action.

“The server goes back to 2007. There are no active passwords listed for those accounts,? said UNDP spokesperson Sausan Ghosheh in a statement, claiming the hackers had only breached an older server. ?Please note that UNDP.org was not compromised.”

After the official UN statement was released, however, the hacker group posted a note on Twitter ridiculing the organization. Its most recent tweet by press time threatened to release a new write-up that would embarrass the UN, the BBC, and Fox News. ?The liars will get dealt with. Let the truth be known,? it said.

Despite the UN attempt to minimize the fallout, cyber-security experts said it would be significant. ?The UN is seen as a symbol for security and trust for many millions of people around the world,? claimed Cryptocard managing director Jason Hart. ?Hacking their systems is TeamPoison’s way of making a big statement to the outside world.?

Hart also explained that the security risk to affected bureaucrats was not over yet. ?The UN has said that the information exposed is old data, but if you look at the YouTube video released by the hackers on Monday it shows account details and usernames as well as personal email addresses,? he noted. ?As we all know, passwords cross personal and professional lives, so these people could well be compromised at work and at home.”

TeamPoison has now reportedly joined forces with a larger and better known ?hacktivist? group called Anonymous to target bankers. The hackers are planning to use stolen bank data to send funds to anti-?bankster? activists and various charities in what is being dubbed ?Operation Robin Hood.?

In March, Anonymous issued a warning that it would be targeting the Federal Reserve System, the International Monetary Fund (IMF), the Bank for International Settlements, the World Bank, and the entire ?global banking cartel.? And in June, the group succeeded in breaching NATO databases to steal over 1 gigabyte of data.

Meanwhile, the UN and its Intergovernmental Panel on Climate Change (IPCC) are under fire again after another batch of stolen e-mails from its ?climate scientists? was leaked ahead of global-warming talks in Durban. The growing scandal, being called ?Climategate 2.0,? exposed the UN?s key ?experts? conspiring to manipulate data, violate laws, and smear opponents of man-made warming theories.