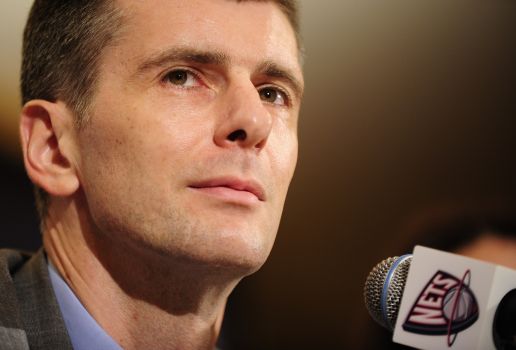 The Russian billionaire challenging Prime Minister Vladimir Putin in March?s presidential election said Thursday that he will push for a common currency with the European Union and liberalize the nation?s political scene if elected.

Mikhail Prokhorov, who owns 80 percent of the New Jersey Nets basketball team, didn?t detail his proposal for a ?common global currency based on the euro and the ruble? in the outline of an election platform that he released on his Live Journal blog. But he pledged to push for Russia?s integration into a ?Big Europe.?

The 46-year-old, who made his fortune in metals, banking and media and is estimated to be worth $18 billion, also promised to disband the parliament elected in a fraud-tainted vote earlier this month, and call for a repeat election next December.

That echoed the demand of participants in recent protests in Russia spurred by allegations of ballot-stuffing and other violations in the Dec. 4 election. Prokhorov attended the latest rally over the weekend, which drew up to 100,000 people?the biggest protest in Russia?s post-Soviet history.

His presidential bid follows his botched performance before the parliamentary election, when he formed a liberal political party with the Kremlin?s tacit support but abandoned it under what he called Kremlin pressure.

Some observers have speculated that Prokhorov may have had the Kremlin?s blessing to join the presidential race in order to cater to voters angry at the government while creating a semblance of genuine competition. Prokhorov has admitted that the Kremlin would like to use him, but insists he will play his own game and try to foster positive change.

Prokhorov also promised to ease controls on Russia?s political scene, which has been tightly controlled by Putin, reform a justice system permeated by corruption and abolish the highly unpopular conscription of soldiers into the military, turning it into a fully professional force instead.

?It?s time to understand that the basis for the nation?s successful development isn?t in tons of coal, barrels of oil and cubic meters of timber, but in a system of human values shared by the society and protected by law,? he said.

?I will build my policy based on a Russian humanitarian tradition that for a long time has been present only in Russian literature. It?s time to make it part of the political sphere and the public life.?