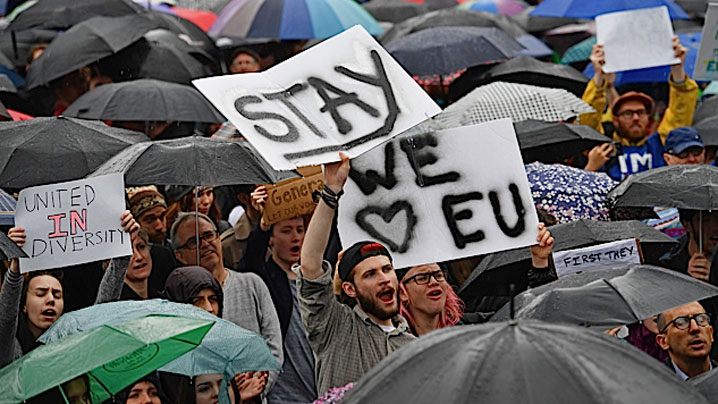 Via alt-market.com, by Brandon Smith

I have said it many times in the past — when elitist criminals start openly admitting to their schemes it means that they are ready to pull the plug on the current system. They simply don’t care anymore who knows their plans because they think that victory is inevitable.

There have been more subtle and less prominently published calls for a “new world order” in the past, to be sure.  However, at no other time have I seen international financiers and their puppet political mouthpieces so brazen about calling for global centralization than in the wake of the successful Brexit referendum. It is as if the Brexit flipped a switch in the existing narrative and set loose a flood of new propaganda, all aimed at convincing the general public that central banks must combine forces and act as one institution in order to combat an economic crisis that isn’t even visible to laymen yet.

Though I predicted the activation of this propaganda campaign in my article “Brexit: Global Trigger Event, Fake Out Or Something Else?,” published before the referendum vote took place, the speed at which it is developing is truly astonishing.

Now, under the current circumstances of the previous week’s market rally post-Brexit (driven by hopes of central bank intervention and extremely low trading volume) one would think that the globalist calls for total centralization of financial policy management don’t make much sense. Where is this “crisis” that the bankers keep warning about?

As I outlined in great detail in recent articles, I believe the Brexit to be a partial trigger event for a future market disaster that has been engineered for many years. That is to say, a worldwide financial calamity has been deliberately staged in advance, and the Brexit is meant to act as a scapegoat for it.  The fundamentals of the global economy have been increasingly negative since 2008, and the only “indicator” left to appear positive has been stocks.

There are plenty of people out there who assume that equities have escaped without consequence after the UK referendum because of the pre-4th of July rally. However, I would suggest they not get too comfortable with the hollow low volume spike in stocks at this early stage.

These kinds of rallies should not be a surprise. They were common during the derivatives and credit crash that struck in 2008 after Bear Sterns and Lehman. Ultimately, stocks are an irrelevant faith driven indicator, and the fundamentals will always win in the end.

As Forbes notes in a surprisingly honest analysis — the “Lehman moment” of 2008 was not really a “moment” at all. The derivatives crash was driven by numerous frailties within the debt bubble structure; Lehman was just a higher profile element of a more chaotic mess. When Lehman’s bankruptcy went public, equities took a considerable dive, rather similar in velocity to that which occurred right after the Brexit referendum. But, only a week later stocks had rallied back near the exact highs seen before Lehman had folded.

The psychology of market investors is to always first go with what they are familiar with and what they have been conditioned to do, much like Pavlovian dogs. Investors today, as then, were conditioned to “buy the dip no matter what”. Of course, once reality and the fundamentals set in, stocks were back in free-fall only two weeks later.

The Brexit is not going away, and the negative effects it heralds are still barely visible to the mainstream. This process is going to be actively weighing on the markets for months as investors continue to lose their blind faith in the system. We haven’t even begun the party yet, and this is assuming there are no other catalyzing moments around the corner.

Beyond the mechanics of the economy, the elites themselves are often a good litmus test for predicting what is about to take place within the stock casino and outside the stock casino.

The fact that the mainstream financial media is now awash in calls for extreme measures in central bank coordination and numerous elites warning of greater crisis should be of some concern to the public. Just as the Bank of International Settlements (BIS) and International Monetary Fund (IMF) warned of a crash back in 2007 and early 2008 and were proven “correct,” they have also been warning of a crash in 2016. Post-Brexit, the chorus of “warnings” from the elites has exploded. They are rarely wrong about economic crisis exactly because they are the people that create the conditions for crisis in the first place.

George Soros continues to claim that the Brexit has “accelerated a financial-market crisis” even after the latest stock rally.

The article repeats a rising call by central bankers around the world to stop concerning themselves with “domestic” policies and problems and start coordinating globally to deal with “global problems.” The BIS ALREADY controls the policy making decisions of all other central banks as admitted in the infamous Harpers expose on the BIS titled “Ruling The World Of Money.” But this is never mentioned by Draghi or Bloomberg.

Interestingly, the BIS is now arguing not only for global policy coordination, but also GLOBAL RULES for all central banks. If the BIS already controls the policy decisions of the Federal Reserve, the ECB, and every other central bank member, then why do they want “global rules” put in place for those same central banks?

They are doing this because the goal, the end game, is for the general masses to accept and even demand a global central bank, either in the form of the BIS or the IMF, or perhaps both of them combined into a single entity. Once again, the elites are using the Hegelian problem-reaction-solution strategy to manipulate the public into wanting globalist control.

The BIS has been building up to this moment for quite some time.  In May, for example, BIS chief economist Claudio Borio argued that a “new global monetary order” was needed to replace the dollar system.  This new system would prevent crisis by reigning in all national central banks under rules which would force them to act in a coordinated fashion, apparently under the administration of the BIS itself.  Now it would seem the central bankers have the beginnings of their “crisis” which they clearly plan to put to good use.

On the day after the Brexit vote, China stated its desire for the Asian Infrastructure Investment Bank (AIIB) to work closely with World Bank. For years I have been pointing out that the Chinese never had any intention for the AIIB to become a counter-system to the IMF or World Bank and that the Chinese were working with the globalists, not against them. Now we have open confirmation.

The Chinese premier also warned of a “butterfly effect” leading to crisis after the Brexit, and called for “enhanced coordination” among all the economies of the world.

European Union officials are going for broke as they suggest the formation of a European “super state” in the wake of the UK referendum. This system would essentially erase political boundaries and sovereign borders to make the EU a single entity in every capacity up to and including a single European army.

The amplified calls for total centralization and a “New World Order” go on and on, and I believe they are a blaring signal that something very ugly is about to happen.

Consider this: Central banks will never gain public support for globally centralized policy or a global economic authority unless they are proven right and a crash does indeed take place. The crash does not necessarily need to be immediate and “total”, as some liberty movement activists assume. It is more likely to be gradual and micromanaged, though still resulting in a level of suffering in certain regions not seen since the Great Depression.

More bank coordination requires more chaos and examples of “conflicting policies,” which will probably take the form of “currency wars” among certain nations. The elites must conjure a theater in which some central banks work at cross purposes and muck up any potential recovery. They can then argue to the public that a single internationally recognized and obeyed global banking authority is needed to prevent this sort of thing from ever happening again.

The concept of central banks “working globally” rather than domestically could only be sold to the masses if a fiscal disaster was triggered on a global scale that outmatched the needs of any single nation state. Each central banker initiative suggested after the Brexit requires a financial implosion in order to be justified.