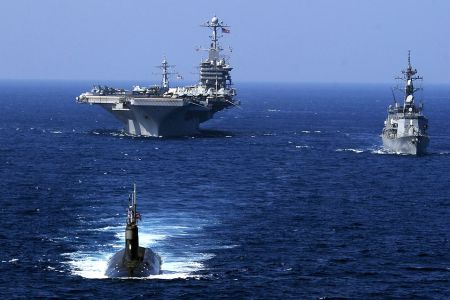 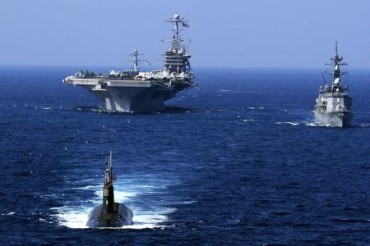 US-Israeli discord over action against Iran went into overdrive Sunday, Jan. 15 when the White House called off Austere Challenge 12, the biggest joint war game the US and Israel have every staged, ready to go in spring, in reprisal for a comment by Israeli Deputy Prime Minister Moshe Yaalon in an early morning radio interview. He said the United States was hesitant over sanctions against Iran’s central bank and oil for fear of a spike in oil prices.
The row between Washington and Jerusalem is now in the open, undoubtedly causing celebration in Tehran.
Nothing was said about the 9,000 US troops who landed in Israel arlier this month for a lengthy stay. Neither was the forthcoming visit by Gen. Martin Dempsey, Chairman of the Joint US Chiefs of Staff, Thursday mentioned.

The exercise was officially postponed from spring 2012 to the last quarter of the year over “budgetary constraints” ? an obvous diplomatic locution for cancellation.  It was issued urgently at an unusually early hour Washington time, say DEBKAfile‘s sources, to underscore the Obama administration’s total disassociation from any preparations to strike Iran and to stress its position that if an attack took place, Israel alone would be accountable.

Israel’s Deputy Prime minister further inflamed one of the most acute disagreements in the history of US-Israeli relations over the Obama administration’s objections to an Israel military action against Iran’s nuclear sites in any shape or form. Yaalon ventured into tricky terrain when he pointed out that US Congress had shown resolve by enacting legislation for sanctions with real bite. But the White House “hesitated.” He went on to say: “A military operation is the last resort, but Israel must be ready to defend itself.”
The friction was already fueled last week by the deep resentment aroused in Israel by Washington’s harsh condemnation of the assassination last Wednesday, Jan. 11, of the nuclear scientist Prof. Mostafa Ahmadi-Roshan, and absolute denial of any US involvement.

Although Tehran has since accused the United States of the attack, the White House treated it as the defiant sign of an approaching unilateral Israeli military operation against Iran to which the administration is adamantly opposed.

DEBKAfile‘s military sources report that a third aircraft carrier and strike group, the USS Abraham Lincoln, is also on its way to the Persian Gulf.
This massive military buildup indicates that  either President Obama rates the odds of an Israel attack as high and is bolstering the defenses of US military assets against Iranian reprisals – or, alternatively, that the United States intends to beat Israel to the draw and attack Iran itself.

The official purpose of Gen. Dempsey’s visit next Thursday was supposed to be coordination between the US armed forces and the IDF. But his main object was another try to dissuade Israel’s government and military leaders from plans to strike Iran without Washington’s prior consent.
The “budgetary constraints” pretext for cancelling Austere Challenge 12 is hard to credit since most of the money has already been spent in flying 9,000 US troops into Israel this month. Although the exercise in which they were to have participated was billed as testing multiple Israeli and US air and missile defense systems, the exercise’s commander, US Third Air Force Lt. Gen. Frank Gorenc, announced that the event was more a “deployment” than an “exercise.”

Its cancellation leaves Washington and Jerusalem at loggerheads in four main areas:

1.  President Obama believes he is rushing through the sanctions against Iran’s central bank CBI and oil restrictions with all possible speed. He needs time to persuade more governments to support him. Israel sees little real progress in the crawling diplomatic bid for backers and is impatient for action. At the rate the sanctions are going through, they will not be in place before the end of 2012 and by then, Iran will have already acquired a nuclear weapon.

Israeli leaders also suspect that the Obama administration may be foot-dragging deliberately in the hope of encouraging Iran to enter into negotiations and so avoid a military showdown. They point out that all previous rounds of talks were exploited for Iran’s forward leaps in their nuclear weapon drive, free of international hassle.
2.  President Obama insists on the US acting alone in attacking Iran with no Israeli military involvement. This would leave him free to decide exclusively when and how to stage an operation. He is counting on the tightened military and intelligence cooperation he has instituted between the two armed forces and agencies to safeguard Washington against the surprise of a lone Israeli action.
But Israel has declined to make this commitment – even in the face of US officials’ efforts at persuasion.

3.  US military strategists are counting on an Iranian reprisal for an attack on its nuclear sites to be restrained and limited to certain US military assets in the region, Israeli targets and oil installations in the Persian Gulf, including a temporary and partial closure of the Strait of Hormuz, through which one fifth of the world’s oil passes.

They expect Israel to refrain from striking back for Iranian attacks and to leave the payback option entirely in American hands. US officials have said they fear an Israeli overkill would tip the entire American military operation into imbalance and generate unforeseen consequences.
The incoming US troops were therefore armed with the sophisticated missile interceptorTHAAD systems (easily transportable Terminal High Altitude Area Defense hit-to-kill weapons) to show the Israeli government that the US would stay on top of all the military moves against Iran – offensive and defensive alike.

On these three points, the US and Israel disagree. Neither Prime Minister Binyamin Netanyahu, nor Defense Minister Ehud Barak or Deputy Prime Minster Yaalon, who are responsible for all decisions on Iran, are willing to put all their trust for defending Israel in American hands or relinquish unilateral military options against Iran. They believe US officials when they assert that the administration is prepared to prevent Iran acquiring a nuclear weapon, but they want to see proof of the pudding and actions to back up the rhetoric. In the light of credible intelligence that Iran is very close to achieving its nuclear goal, Israel is holding on to its military option over American objections.