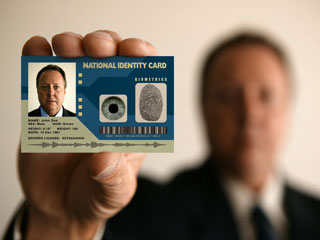 CHARLESTON ? Is the Real ID a precursor to the end-time world dictator known in Bible prophecy as the Antichrist?

A Randolph County school teacher is convinced there is an eventual link, and wants West Virginia lawmakers to grant anyone with a religious conviction an exemption from the license that employs biometrics.

?If we as Christians comply with the Real ID act, we would be enrolled into a global system of identification that directly links our body through biometrics to our ability to buy or sell,? Philip Hudok told the Senate Transportation and Infrastructure Committee Tuesday.

Hudok spoke in support of SB550, authored by Sen. Clark Barnes, R-Randolph, who seeks to extend an exemption to the Real ID on religious grounds.

A few years ago, Barnes sought to block West Virginia from taking part in the Real ID, a spawn of the fear that spread across the nation in the aftermath of the 9/11 attack.

His bill cleared the Senate but wasn?t taken up by the House of Delegates.

Hudok?s beliefs are couched in Revelation 13:16-17, ?And he causeth all, both small and great, rich and poor, free and bond, to receive a mark in their right hand, or in their foreheads;

?And that no man might buy or sell, save he had the mark, or the name of the beast, or the number of his name.?

Hudok emphasized he wasn?t saying that those enrolled in the global system are under the thumb of the ultimate Beast, but said the use of Real ID means biblical prophecy is ?well under way.?

?And that?s the bottom line,? he said of the driver?s license.

?You can hardly do anything without a driver?s license.?

Instead of employing biometrics, Hudok suggested the Division of Motor Vehicles rely simply on a birth certificate to verify one?s identity.

Hudok, a member of a church known as Call to Decision, in the Nicholas County town of Nettie, told the panel he teaches at a school in Pickens.

?If end-time prophecy is not important to Christians, I?d like to know what is,? he told the Senate committee.

?I think you need to make considerations for people who have religious convictions,? he said.

?You can?t compromise on a conviction.?

For that reason, Hudok said, if the new driver?s license becomes standard, he simply will drive without one.

?I don?t have any alternatives but to live according to my convictions,? he said.

?I?ve drawn a line. I can?t go there. My religion says that this is leading to some place where I cannot go.?

Afterward, Barnes said his latest bill is a follow to one he authored a few sessions ago.

?This doesn?t say we?re not going to participate like the original bill,? the senator said.

?But it does say it would grant a religious exemption to requirements of biometric data. That?s what these very well-meaning and respectful folks believe in, and believe in very sincerely. They don?t want their biometric data placed in a database that not only is right here in West Virginia, but is nationwide and international.?