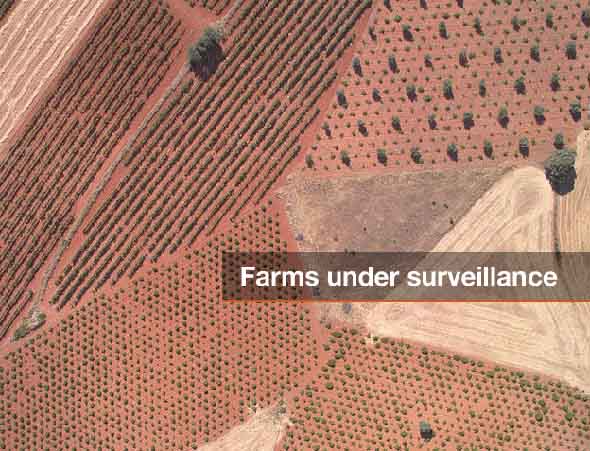 Farmers who claim more EU subsidies than they should, or who break Common Agricultural Policy rules, are now more likely to be caught out by a camera in the sky than an inspector calling with a clipboard. How do they feel about being watched from above?

Imagine a perfect walk in the country, a few years from now – tranquillity, clean air, birdsong in the trees and hedgerows, growing crops swaying in the breeze.

But there is no-one around manipulating radio controls. This is not a toy, but a drone on a photographic mission.

Meanwhile, hundreds of kilometres up in space, the same patch of land is being photographed by a satellite, which clearly pinpoints individual trees and animals.

What is there to spy on here? No secret military installations, just farmland.

But Europe’s farms cost taxpayers billions of euros in subsidies each year, and EU agricultural inspectors are turning to technology to improve their patchy record on preventing fraud and waste.

Satellites have already been in use for several years, and drones are currently undergoing trials.

Scanning a farm with a satellite costs about one third as much as sending an inspector on a field visit – ?115 ($180; 150 euros) rather than ?310 ($490; 400 euros), says the UK’s Rural Payments Agency (RPA), which is responsible for disbursing the subsidies in the UK and checking for irregularities.

“The RPA follows up only on those claims where there is some doubt about accuracy, and then only at the specific fields for which the doubt exists,” the RPA says. “This saves time, lifts the burden on farmers and reduces cost to the taxpayer.”

Satellites can rapidly cover a huge area in detail and quickly return to photograph it again if necessary.

Spying on Europe?s farms with satellites and drones
http://endtimeinfo.com/2012/02/spying-on-europe%e2%80%99s-farms-with-satellites-and-drones/
dronesspyingsurveillance
Previous ArticleRussia to lash Israel for War Rhetoric against IranNext ArticleDoomsday Report: THREE MILLION PREPPERS IN AMERICA Are Getting Ready For The End of the World As We Know It