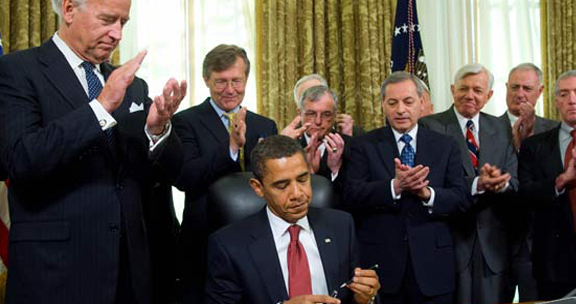 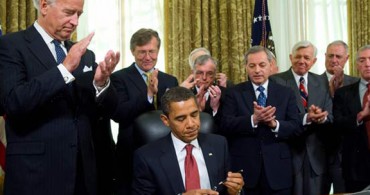 On March 16th, President Obama signed a new Executive Order which expands upon a prior order issued in 1950 for Disaster Preparedness, and gives the office of the President complete control over all the resources in the United States in times of war or emergency.

The National Defense Resources Preparedness order gives the Executive Branch the power to control and allocate energy, production, transportation, food, and even water resources by decree under the auspices of national defense and national security. The order is not limited to wartime implementation, as one of the order’s functions includes the command and control of resources in peacetime determinations.

Section 101. Purpose. This order delegates authorities and addresses national defense resource policies and programs under the Defense Production Act of 1950, as amended (the “Act”).

(b) assess on an ongoing basis the capability of the domestic industrial and technological base to satisfy requirements in peacetime and times of national emergency, specifically evaluating the availability of the most critical resource and production sources, including subcontractors and suppliers, materials, skilled labor, and professional and technical personnel; – White House

Additionally, each cabinet under the Executive Branch has been given specific powers when the order is executed, and include the absolute control over food, water, and other resource distributions.

Executive Orders created for national defense and national preparedness are not new in American history, but in each instance they brought about a Constitutional crisis that nearly led standing Presidents to hold dictatorial power over the citizenry. During the Civil War, President Lincoln halted freedom of speech and freedom of the press, while at the same time revoking Habeas Corpus and the right to a fair trial under the sixth amendment. During World War I, when Congress refused to grant Woodrow Wilson extended power over resources to help the war effort, he invoked an Executive Order which allowed him complete control over businesses, industry, transportation, food, and other economic policies.

In both cases, it was only after the death of each President that full Constitutional powers were restored to the citizens of the United States.

The economy of the United States is based on the free flow of resources, energy, and the rights of consumers to buy and sell as they see fit. Any interference in this economic process quickly leads to shortages, rising prices, and civil unrest. The purpose of President Obama signing this new Executive Order is yet unclear, however, it may coincide with information coming out of Israel yesterday that plans for a tactical or strategic strike on Iran are accelerating. Oil prices in Europe rose over $3 a barrel for Brent crude after the Israeli actions, and US oil prices rose $2 for WTI.

The Obama administration appears to be preparing for a long drawn out war in the Middle East, or at the very least, an expected crisis that will require the need to override Constitutional authority and claim dominion over all resources in the United States under the guise of national defense. With the rise in Disaster Preparedness growing for both individuals and states leading up to yesterday’s Executive Order, the mood of the nation points strongly towards some event or disaster that will require massive preparations on a national as well as local scale.