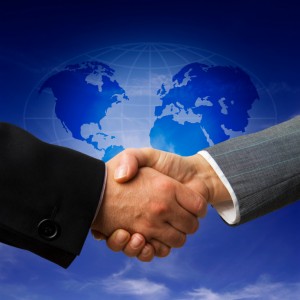 e advisor to British Prime Minister Margaret Thatcher says the real purpose of the United Nations Climate Change Conference in Copenhagen on Dec. 7-18 is to use the global warming hype as a pretext to lay the foundation for a one-world government.

“I read that treaty and what it says is this: that a world government is going to be created. The word ‘government’ actually appears as the first of three purposes of the new entity.”

“The second purpose is the transfer of wealth from the countries of the West to Third World countries, in satisfaction of what is called, coyly, ‘climate debt’ ? because we’ve been burning CO2 and they haven’t. We’ve been screwing up the climate and they haven’t.?

?And the third purpose of this new entity, this government is enforcement.”

This Copenhagen Conference is not just any conference, but as Lord Christopher Monckton states its main agenda is setting up the world government & the second purpose is the transfer of wealth from the countries of the West to Third World countries.

Both of these agendas are in line with Bible Prophecy.  According to Bible end time predictions we?re expecting the rise of a World Government, or ?Global Governance? as popularly referred to in the news nowadays.

From all indications that appear in the news daily, a world government is rising now & is in the making, or at least being talked about, but not yet in place. We do know that eventually a World Leader known as the Antichrist will lead this coming world government. Now whether he rises with the World Government or comes on the world scene after the world government is in place is still not clear.

Although the Antichrist is probably alive now, we don’t yet know who he is. But before the world will accept a one-world government and supreme leader, the world situation will have to be pretty desperate. When there is peace and safety people don’t really get distressed. War, terrorism, economic collapse, and disasters will all help create the climate for the Antichrist’s “peaceful” takeover. With each crisis we face the world population is more and more ready to scream, “Who will save us from this mess?”

The Antichrist and his agents are working to bring chaos into the world, lining things up for the grand entrance of the false savior, the Antichrist. By capitalizing on the effects of economic, political, and natural disasters, they keep pushing things in that direction.

Agenda point No. 2 is ?the transfer of wealth from the countries of the West to Third World countries?. If we read Daniel 11:24, that point in the agenda gives us the economic policy of the Coming World Government & its Antichrist Leader, although the global government is not yet in place.

Dan 11: 24: ?He shall enter peaceably, even into the richest places of the province; and he shall do what his fathers have not done, nor his forefathers: he shall disperse among them the plunder, spoil, and riches; and he shall devise his plans against the strongholds, but only for a time.?

?He shall disperse among them the plunder, spoil, and riches? sounds like he will distribute the wealth to win the support of the poor. Just like the phrase found in verse 39, where it says he will ?divide the land for gain??possibly meaning political gain. ?He shall do what his fathers have not done, nor his forefathers.? Throughout history, very few conquerors have distributed the wealth or divided the land among the poor.

So you can see these important topics are being discussed on a world scale, but how soon will the World Government be in place & when will the Antichrist come on the international scene is still unknown.

And what about the third purpose, enforcement power?

Experts are saying new global policy changes could possibly destroy entire economies. At the same time, these ‘scientists’ stood to gain millions and millions in added research dollars to continue to ‘monitor’ man-made global warming that most likely doesn’t exist.

What Is The Climategate Scandal & Will It Delay the Global Government Agenda?

The Copenhagen Conference & The Climategate Scandal

Emails stolen from the University of East Anglia allegedly show scientists were willing to manipulate data on climate change. Climate change skeptics say the scandal casts doubt on the argument that man made greenhouse gases cause global warming. These ‘scientists’ appear to have doctored data with the distinct purpose of promoting a false outcome. Unencumbered by such quaint scientific protocol, these guys knew the raw data they obtained were an inconvenient truth, so they “lost” them. These “scientists” were determined to prove global warming by faith alone, not by any credible methodology or solid evidence.

Ripples created by the disclosure of global warming files called “ClimateGate” continues to spread, with congressional attention growing and the head of a prominent climate change group has stepped aside.

Phil Jones, the head of the Climactic Research Unit at the University of East Anglia, relinquished his post while the U.K. school conducts an investigation into allegations of scientific and professional misconduct.

Jones’ announcement comes as he and his allies, who published some of the foundational data used to support the claim that global warming exists, have been pummeled by waves of criticism. As CBSNews.com reported, the leaked files show that prominent scientists were so wedded to theories of man-made global warming that they ridiculed dissenters who asked for copies of their data, plotted how to keep researchers who reached different conclusions from publishing, and concealed apparently buggy computer code from being disclosed under the Freedom of Information law.

There is the danger to jeopardize an international global climate deal at Copenhagen this month to tackle temperature rise. However there are already concerns that the results of the inquiry & investigation will come too late to prevent the scandal from impacting on Copenhagen.

In spite of the reports of doctored data, the U.N.’s top climate official on Sunday December 6th, conceded that hacked e-mails from climate scientists had damaged the image of global warming research but said evidence of a warming Earth is solid.

Listen to Lord Christopher Monckton’s speech given on October 14, 2009 regarding the United Nations Climate Change Treaty that is scheduled to be signed in Copenhagen in December 2009.