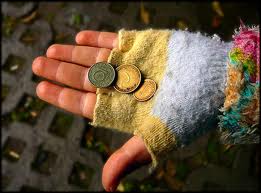 If you still have a job and you can put food on the table and you still have a warm house to come home to, then you should consider yourself to be very fortunate. The truth is that every single month hundreds of thousands more Americans fall out of the middle class and into poverty.

Household incomes are down from coast to coast. Home ownership is down, personal bankruptcies are way up and there are not nearly enough jobs to go around.  Meanwhile, the price of basics such as food and health care continue to skyrocket. Don’t be fooled by a rising stock market or by record bonuses on Wall Street.  The U.S. economy is not getting better.  After World War II, the great American economic machine built the largest and most vigorous middle class in the history of the world, but now America’s middle class is disintegrating at a blinding pace.

Most of those who write about the plight of the American middle class believe that things can be turned around and that the middle class will eventually be stronger than it ever has been.  But unfortunately, that is just not the case.  As a society, we have lived far, far beyond our means for decades.  Now the bills are coming due and none of our leaders seem to know what to do.

Meanwhile, the U.S. economy is being rapidly assimilated into the emerging one world economy.  Middle class American workers now find themselves in direct competition for jobs with the cheapest labor on the other side of the globe.  Of course many multinational corporations have taken advantage of this by moving factories and jobs to countries like China where blue collar workers make about a dollar an hour.  This has helped raise the standard of living for workers in those nations by a nominal amount, but it has been absolutely devastating for the standard of living of America’s middle class.

So what does all of this mean?

It means that the U.S. economy is headed for collapse and middle class Americans are in for some really, really hard times.

The Standard Of Living For America?s Middle Class Is Dropping Like A Rock
http://endtimeinfo.com/2010/10/the-standard-of-living-for-america%e2%80%99s-middle-class-is-dropping-like-a-rock/
dollareconomic collapsefood riotsinflationUS economy
Previous ArticleEmergency workshop prepares people for world without powerNext ArticleChinese Style Internet Censorship on the Way to Australia?