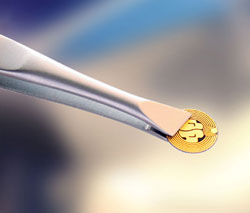 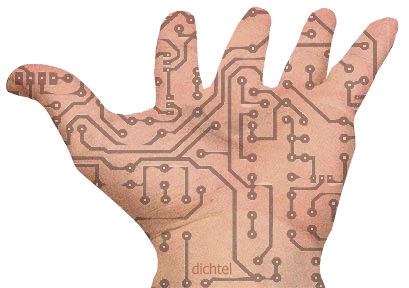 Cameras everywhere, national ID cards, global positioning satellites (GPS), microchips implanted under the skin. The latest sci-fi?–No, just topics that now routinely appear in the news. In fact, many of them are no longer news. One particular development, however, warrants keeping an eye on.

The VeriChip, unveiled by Florida-based Applied Digital Solutions (ADS) in December 2001, is being hailed as the first workable microchip implant for humans.

The chip is designed to carry a unique ID number and other personal data (up to 128 characters, or about 40 words), and acts like a personal bar code. About the size of the tip of a ballpoint pen, it is syringe-injectable. Once injected, an external scanner can activate the chip. By means of radio signals, the chip can then transmit the ID number and other stored information to a telephone, the Internet, or a data-storage site. The chip is similar to those implanted in about a million dogs and cats to enable owners to identify and reclaim lost pets. Already being test-marketed in some parts of the world, VeriChip comes with a handheld scanner and an injection kit.

VeriChip is stirring the public’s imagination. Reactions range from teenagers who think the device is cool and can’t wait to get chipped, to civil liberties advocates who worry that the device will someday come under the control of Big Brother.

ADS calls the chip a potential lifesaver for Alzheimer’s patients who may get lost, and a godsend for emergency room medical personnel because it would provide instant foolproof identification and basic medical information for patients who are unconscious or in shock.

Peace of mind through enhanced personal security and safety is ADS’s main selling point. In South America, for example, the chip is being promoted as a way to identify and track kidnap victims. For that market, the chip is being bundled with ADS’s personal GPS device, Digital Angel. Other possible law enforcement uses include tracking parolees, people under house arrest, and individuals in witness protection programs.

Proponents tout Digital Angel as “an interface between the human and electronic networks.” The microchip would last the bearer’s lifetime, and recent ADS statements say the VeriChip is superior to biometric technologies because it is implanted and therefore virtually tamper-proof.

While the VeriChip may not be the Antichrist’s “mark of the Beast,” it is a giant step in that direction.

Critics of the chip express concerns over the specter of people being injected with the chip against their will, perhaps surreptitiously in conjunction with routine vaccinations. In addition, they are concerned about the possibility of such chips eventually being mandated by the government as a form of ID.

ADS CEO Richard Sullivan said he can see the chips being used in children, the elderly, prisoners, and by employers at facilities such as airports and nuclear plants. “Society in general could also use them instead of ATM or credit cards,” he added. Others in favor of human chip implants say they have nothing to hide, so wouldn’t mind having the chip for ID purposes. They already have an ID card, they argue, so why not a chip?

All of this is sounding more and more like the following prophecy from the Bible’s book of Revelation: “He causes all, both small and great, rich and poor, free and slave, to receive a mark on their right hand or on their foreheads [the King James Version of the Bible renders this “in the right hand, or in the forehead”–not on], and that no one may buy or sell except one who has the mark or the name of the Beast [the Antichrist], or the number of his name. Here is wisdom. Let him who has understanding calculate the number of the Beast, for it is the number of a man: His number is 666″ (Revelation 13:16-18).

Regardless of who may be behind all the media attention being given the VeriChip–be it sinister spiritual forces preparing the way for the Antichrist or capitalists eager to create a new billion-dollar industry or both–the goal is the same: to get people used to the idea, so they will buy it. This is standard advertising strategy. The more people see or hear a product being promoted, the more appealing it becomes. Eventually they are convinced they need it.

This side effect is just as predictable: As more and more people accept human microchip implants, objections from those who can see what it’s all leading to will be first discredited and then denounced as the irrational hysterics of society’s paranoid fringe elements.

While the VeriChip may not be the Antichrist’s “mark of the Beast,” it is a giant step in that direction.

But there is more to it than that–or will be. The coming mark of the Beast will have spiritual ramifications as well as practical ones. “If anyone worships the Beast [Antichrist] and his image, and receives his mark on his forehead, or on his hand, he himself shall drink of the wine of the wrath of God” (Revelation 14:9-10). Receiving the mark of the Beast will not be merely an economic decision, but will also signify acceptance and worship of the Satan-possessed Antichrist and allegiance to his anti-God global regime. This is what the future of chipping holds, and what most of its advocates don’t realize or choose to ignore.

Will you refuse to accept the coming mark of the Beast because you belong to Jesus? The time to get ready for these events is now, and the way to get ready is by receiving Jesus as your Savior.

More on Human Chip Implants
http://endtimeinfo.com/2011/01/more-on-human-chip-implants/
cashlesschip implantpolice stateRFID
Previous ArticleWhen does the mark of the Beast begin?Next ArticleThe Application that can Read Your Mind