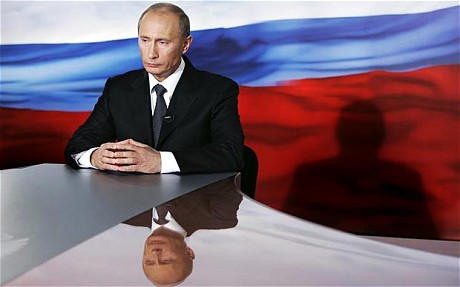 The Kremlin has unveiled the biggest rearmament program since the fall of the Soviet Union, saying it intends to buy 600 new planes, 100 new ships and 1,000 new helicopters within the next decade.

The ambitious overhaul will cost the equivalent of ?406 billion and comes at a time when other countries around the world such as Britain are cutting their defense spending to try to balance their national budgets.

But with oil prices rising, Russia, the world’s biggest energy exporter, feels confident it can afford to upgrade its dilapidated Soviet-era military and believes it urgently needs to do so in order to confirm its self-proclaimed status as a major world power.

“The main task is the modernization of the armed forces,” he said. “Nineteen trillion rubles (?406 billion) will be allocated for this. We are not interested in purchasing any foreign weapons or military equipment.”

Vladimir Putin, the prime minister, has joked he is frightened to even imagine how much the Kremlin is about to spend on arms, while Alexei Kudrin, the finance minister, has said that defense spending will account for 1.5 per cent of gross domestic product in future, up from 0.5 per cent now.

Deputy defense minister Vladimir Popovkin boasted that the shopping spree would reshape the Russian navy, giving it 35 new corvettes, 15 new frigates and 20 new submarines, eight of which would be nuclear-powered and armed. In total, he estimated, the navy, which is currently badly trailing the US navy in terms of modern ships, would take delivery of 100 new vessels before 2020.

Despite his claim that Russia would not need to buy foreign military hardware, two of the new vessels will be French-built Mistral class helicopter carriers. Russia will build itself a further two new Mistrals at its own shipyards, he added.

The sale of the ships by France is controversial among some of Russia’s neighbors such as the Baltic states and Georgia as the giant ships can carry 16 helicopters and dozens of armored vehicles, giving Russia the ability to quickly land hundreds of troops on foreign soil.

Russia’s air force, which performed inconsistently during the country’s brief and victorious war against Georgia in 2008, will also be refitted and be given 600 new planes and 1,000 new helicopters before 2020.

The planes will mostly be modern Sukhoi 34 and 35 fighters, while the helicopters will include Mi-8 helicopter gunships and the bigger Mi-26 heavy lift cargo helicopters. The country’s fearsome TU-160 strategic nuclear bombers, the same planes that have begun to probe the limits of the UK’s airspace in recent years, will also be completely modernized.

Much of the enormous spend will be channeled into Russia’s strategic missile forces with several hundred mobile S-400 and S-500 defense missile systems on order and a new intercontinental ballistic missile in development capable of carrying ten nuclear warheads.

The Kremlin continues to push pride in the country’s military as a major part of Russian national identity and Mr Putin restored the Soviet tradition of Red Square military parades in 2008 to boost the armed forces’ prestige.