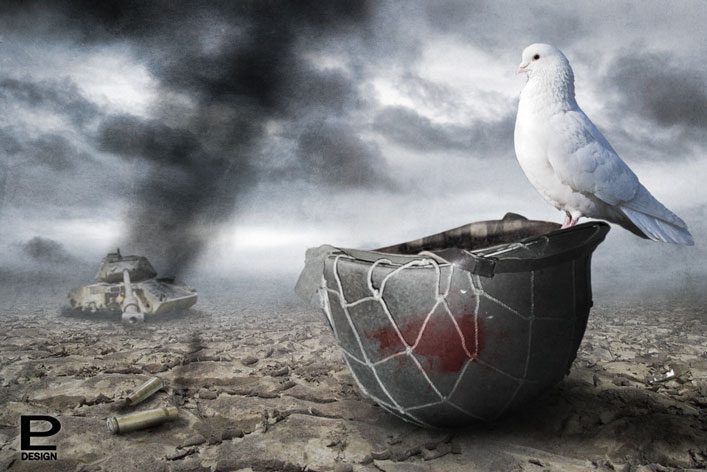 The world is becoming a more dangerous place and there are now just 10 countries which can be considered completely free from conflict, according to authors of the 10th annual Global Peace Index.

The worsening conflict in the Middle East, the lack of a solution to the refugee crisis and an increase in deaths from major terrorist incidents have all contributed to the world being less peaceful in 2016 than it was in 2015.

And there are now fewer countries in the world which can be considered truly at peace ? in other words, not engaged in any conflicts either internally or externally ? than there were in 2014.

According to the Institute for Economics and Peace, a think tank which has produced the index for the past 10 years, only Botswana, Chile, Costa Rica, Japan, Mauritius, Panama, Qatar, Switzerland, Uruguay and Vietnam are free from conflict.

Brazil is the country that has dropped out of the list, and as one of the worst performing countries year-on-year represents a serious concern ahead of the Rio Olympics, the IEP?s founder Steve Killelea told The Independent.

But perhaps the most remarkable result from this year?s peace index, he said, was the extent to which the situation in the Middle East drags down the rest of the world when it comes to peacefulness.

?If we look at the world overall, it has become slightly less peaceful in the last 12 months,? Mr Killelea said.

?But if we took the Middle East out of the index over the last decade ? and last year ? the world would have become more peaceful. It really highlights the impact the Middle East is having on the world.?

The index shows that 81 countries became more peaceful in the past year, while the situation deteriorated in 79.

Unlike with previous years, however, the IEP noticed a clear trend where the more peaceful countries improved further while the less peaceful countries got even worse ? producing what they called greater ?peace inequality? across the world.

?The key reason behind it is our inability to solve the conflicts which are emerging,? Mr Killelea said. ?The conflicts in Afghanistan and Iraq have been going for well over a decade, then it spilled into Syria in 2011, and afterwards into Libya and Yemen. That [failure] is really the key to the problem.

?If we take battlefield deaths for example, they are up at 112,000 ? a 20-year high. But again, if you took out Syria, Iraq and Afghanistan, they count for 75 per cent of those deaths.?

The index shows that political instability worsened in 39 countries in the last 12 months, including what the report described as the ?striking case? of Brazil.

It has fallen five places to 105th out of the 163 countries included in the study, due to increases in the number of people jailed, the number of security officers deployed by the state and also a slight increase in terrorist activity.

?It is very difficult to say how that will play out in terms of the Olympic Games,? said Mr Killelea. ?It?s obviously a very volatile situation.?

Asked how the rest of the world can learn from Iceland, Mr Killelea said: ?It?s not just Iceland, it?s a whole range of countries which we can learn from. They are practising what we call positive peace, which are factors which create and sustain peaceful societies.?

The IEP tries to define positive peace in numerical terms, giving countries scores for a range of factors including ?acceptance of the rights of others?, ?low levels of corruption?, ?the free flow of information? and a ?well functioning government?.

?If positive peace is strong enough, then a country which is presented with shocks won?t actually have a deterioration in peace [as measured by violence],? he said.

Finally, the index identified Europe once again as the most peaceful region in the world, and by some margin, home to seven of the top 10 countries on the list.

Yet the continent is not immune to war ? Britain, France, Belgium and others are heavily involved in external conflict in the Middle East, and face a growing threat to peace from international terrorism.

So given all the dire warnings from either side about the security of Europe if Britain leaves the EU, does the IEP foresee a change in the region?s fortunes in the event of Brexit?

?It?s unlikely to have an effect in the short term,? Mr Killelea said. ?But the longer-term ramifications, more for Britain than for [the rest of] Europe, would probably depend on what the economic outcome of a British exit would be.

?If the economy was robust Britain would probably maintain its current levels of peace. However, if there?s a deterioration in the economy then that would come back and have a negative impact on peacefulness.?

"Most Dangerous" World In A Decade Has Only 10 Countries Not At War
http://endtimeinfo.com/2016/06/most-dangerous-world-in-a-decade-has-only-10-countries-not-at-war/
Middle Eastpeacewars
Previous ArticleThe Internet Is Buzzing over Mel Gibson’s Plan for a “Passion of the Christ” SequelNext ArticleLeibniz’ Contingency Argument – Why Does the Universe Exist?