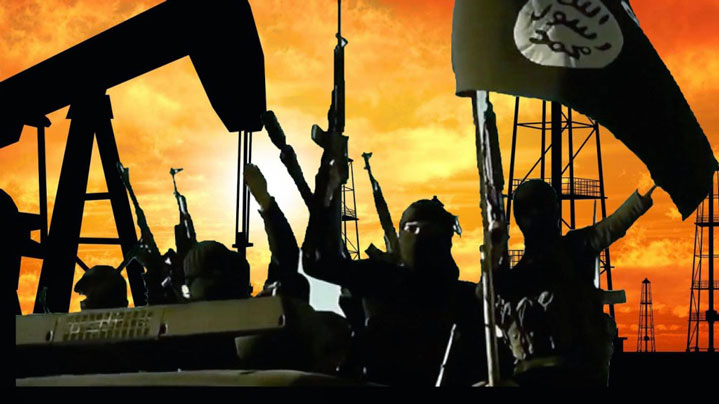 Ever since the Russians began dropping real bombs on real ISIS targets in Syria, the United States and NATO have been forced to engage in a two-sided propaganda campaign that swears opposition to ISIS while simultaneously doing everything it can to facilitate and protect ISIS forces on the ground. It has also found itself in the bizarre position of trying to facilitate the death squad army while, at the same time, attempting to play catch-up to the Russians in at least the appearance of bombing ISIS.

Thus, when Russian forces truly hit at one of the sources of ISIS funding ? the captured oil being shipped from Syria and Iraq to Turkey where it is purchased by Turkish Prime Minister Erdogan?s son, Bilal ? the United States must then engage in its own faux bombing campaign against ISIS oil trucks.

Yet, instead of actually bombing the trucks ? drivers and all ? and putting them out of commission permanently, the U.S. bombing campaign takes the form of a laughable formality that involves a 45-minute warning to the oil convoys that a U.S. bombing campaign is about to take place. The warning involves an airdrop of leaflets to the tankers that read ?Get out of your trucks now, and run away from them. Warning: air strikes are coming. Oil trucks will be destroyed. Get away from your oil trucks immediately. Do not risk your life.?

The justification is that the drivers of the tankers might be civilians and not actual ISIS members.

Of course, there is no mention of the fact that, in any other context, an individual who renders ?material support to terrorists,? particularly in the form of driving tankers of stolen oil in a war zone that will be used to fund the terrorist organization would be killed without question under that designation.

There is also no mention as to why these ?potential civilians? received ample warning but true civilians receive no such courtesy. It is truly a pity that the U.S. did not drop leaflets to the million Iraqis it has killed over the last decade or the thousands of Libyans that died at the hands of NATO.

Still, one need only look at the numbers of destroyed oil tankers racked up by the U.S. in comparison to the Russians to see a distinct difference. The United States, according to Col. Steve Warren, has taken out only 116 tankers since the bombing campaign began while the Russians have eliminated over 1,000 in five days. Remember, until the Russians began bombing the oil tankers, the United States had yet to launch an attack on them.

Even more laughable was the response that came when the U.S. military was questioned as to why they were unable to destroy more trucks than they did after such a highly publicized strategy. According to Army Co. Steve Warren, the American jets simply ?ran out of ammo? in the process. ?The goal was to destroy every truck there. They ran out of ammunition before they were able to do that. But the desire was to destroy every single truck there,? he said.

Even with the new attempt to be seen as truly aimed at fighting ISIS in the eyes of the gullible American public, the U.S. has been forced to use videos and photographs from Russian bombings to purvey across the mainstream media due to the fact that American strikes on ISIS oil trucks are so rare.

Indeed, American foreign policy propaganda would be greeted as much needed comic relief if it were not so tragic and potentially dangerous to the rest of the world.

US Gives ISIS 45 Minute Warning Before Bombs, ?Runs Out Of Ammo? Against ISIS Targets
http://endtimeinfo.com/2015/12/us-gives-isis-45-minute-warning-before-bombs-runs-out-of-ammo-against-isis-targets/
ISISoilRussiaSyriaterrorism
Previous ArticleInvestigative Journalist For CBS News Exposes How Mainstream Media Brainwashes The PublicNext ArticleThe Elites Have Been Preparing For This For Months! ‘Now It Is Too Late To Do Anything About It’